Moose are powerful animals that look similar to deer: With their massive body and the huge shoveled antlers on their heads, they are really impressive.

Moose belong to the deer family and thus to the even-toed ungulates. They are the largest living deer and can easily look down on a person from above:

Their shoulder height is up to 230 centimeters, they measure up to 300 centimeters from head to bottom and they weigh between 300 and 800 kilograms. The females are always smaller than the males. Moose can be distinguished from other deer species at first glance because they have long legs in relation to their massive body: these measure 110 to 120 centimeters.

The chest and shoulders are very broad and muscular, the back of the body slopes downwards.

The antlers, which can be up to two meters wide and weigh up to 20 kilograms, are typical of bull Moses. It is called a shovel because the appendages are wide and shovel-like in shape. The scoop is shed each spring and grows back by fall.

The so-called moose hump on the shoulders is also noticeable in males. This is where many large muscles and tendons attach that carry the antlers. 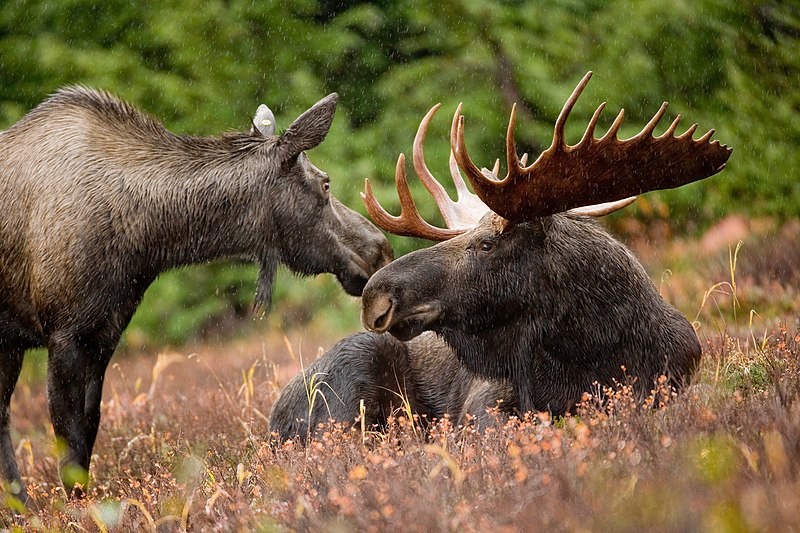 This hump is more pronounced in the males and is smaller in the females, which do not have antlers. Moose has a thick, long coat of fairly harsh hairs. It is reddish-brown to blackish brown and darker in summer than in winter. The fur on the legs is much shorter and lighter. The ears are elongated-oval and taper towards the ends, the eyes are relatively small.

The snout is unmistakable: the upper lip, the so-called muffle, is very wide and hangs well over the lower lip. In addition, both males and females sport a 20 to 25-centimeter long beard on their chin when they are adults. The tail is tiny, measuring just five to ten centimeters.

Moose are even-toed ungulates. Their hooves are in two parts connected by a skin – the skin is unique to moose compared to other deer. This skin prevents the animals from sinking into the snow or mud.

Where do moose live?

Moose live in cool, northern regions: they inhabit northern Europe, Asia, and North America. In America, they live mainly in Canada, Alaska, and small parts of the USA, in Europe mainly in Scandinavia, Finland, and Russia. They used to be on the road in the north-east of Central Europe. There they were exterminated.

Moose live in forests interspersed with swamps and lakes. In the far north, in the Arctic, they can also be found in treeless regions.

What types of moose are there?

How old do moose get?

In the wild, moose usually live only 15 years, in captivity, they can live for about 27 years.

How do moose live?

Unlike our red deer, for example, moose are loners, only in winter do they sometimes come together in small groups.

Moose walk long distances and can run up to 60 kilometers per hour. In addition, they can swim excellently and persistently. And they are great divers: they can close their nostrils and therefore dive a few meters in search of aquatic plants.

The moose rutting season begins in autumn. Then the antlers of the bull elk have grown and are up to two meters wide, with American elk even up to two and a half meters. At first, the scuffles between the males are harmless, but when they finally fight seriously for the moose cows, they engage in fierce battles. Moose can even be dangerous to humans: If you frighten them and they feel threatened, they kick around wildly. 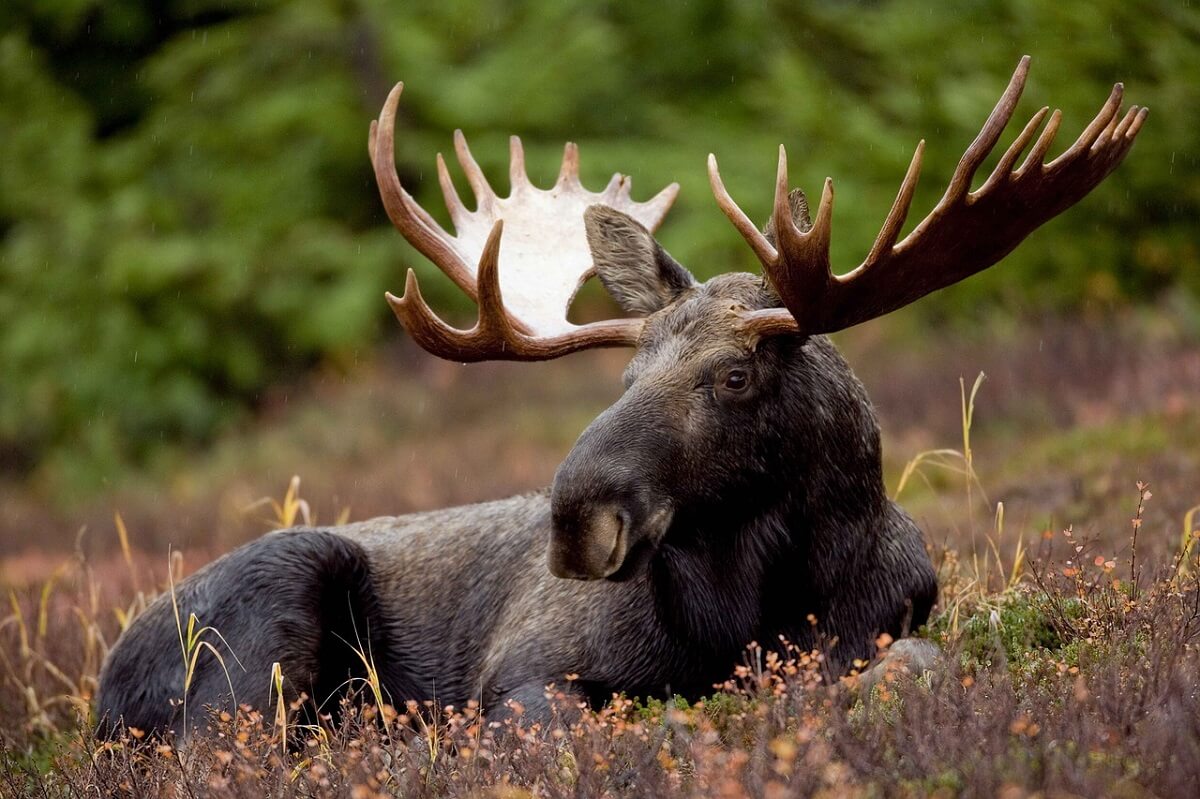 What do moose eat?

Moose are herbivores and real gourmets: They don’t eat grass, but mainly young tree shoots, buds, fresh leaves from poplars, birches, and willows as well as aquatic plants in summer. This “green stuff” is particularly rich in energy. They also eat lichens – plant-like growths made up of algae and fungi.

In winter, they nibble on twigs of blueberries, heather, and pine and use their upper lip, the muffle, to peel the bark off branches. In winter, they also feed on the fat deposits they have accumulated in summer.

When raised by humans, moose can become very tame. However, they need a very special feed and are therefore not easy to keep.