The dipper is so named because it looks like a blackbird and lives near water. It is the only songbird that can also swim and dive.

The Dipper is dark brown with a large white bib. Its wings are fairly short and rounded, and it usually holds its tail up like a wren. She is about 18 cm tall and has strong, long legs. Young dippers are brown-grey.

They also have a darker back and a lighter belly. Only when they are adults do they wear the typical bright white breast and throat bib. By the way: Males and females look the same.

Where does the dipper live?

The dipper is found in Europe, North Africa, and the Near East. Dippers love fast-flowing rivers and streams with cold, clear water and gravel and boulders on the bottom. Low shrubs and bushes must grow on the bank so that they can find hiding places and places for their nests. Such bodies of water are mostly located where it is mountainous and hilly. The dipper doesn’t mind the cold: it stays with us even in winter. And in the mountains, you can even find them up to 2000 m altitude!

What types of diapers are there? All dippers belong to the dipper family. This may sound logical, but it is not self-evident: the blackbirds that we know from our gardens belong to the thrushes! So, despite the similar name, blackbirds and dippers are not related.

How old do dippers get?

Dippers can live up to ten years.

How does a dipper live?

The Dippers are fascinating to watch. They fly close to the surface of the water, sit down on a stone and always make the same movements: they raise their tails up, bend their legs and rock their bodies up and down. Then they plunge headlong into the water to forage. Dippers are perfect underwater hunters. Although they don’t have flippers on their feet, they paddle with their short wings and can thus swim underwater quite adeptly.

To avoid being swept away by the current, they use a trick: they stand at an angle to the current so that it pushes their body slightly under the water. Then they can even walk on the bottom underwater with their strong legs. The longest dives last 30 seconds, but they usually come back to the surface with their prey after a few seconds. In winter, they even dive through holes in the ice sheet.

Dippers are well adapted to life in the water: To keep their dense feathers from getting wet, they grease their plumage – similar to ducks – with an oily liquid that comes from the preen gland. They can also plug their nostrils and ears when diving. Their eyes are not curved, but flat like diving goggles, so they can see well both above and below water. Dippers usually live alone. Only during the breeding season do they like company and then they live with their partner.

Friends and foes of the dipper?

Young dippers in particular have enemies: cats, rats, weasels, and even jays can be dangerous to them.

How do dippers reproduce? 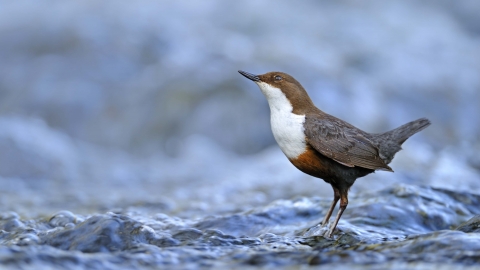 The male dipper starts building the nest as early as February. It builds a spherical nest on the bank edge under roots, tree trunks, or in holes in walls and under bridges. If it finds a partner, she will help it build. The nest is covered with moss on the outside and well-padded with leaves on the inside. It has a small entrance on the side.

To keep enemies from getting in, it lies just above the water in a small cave or in a dark, hidden corner. Dippers sometimes look for a particularly safe place for their nest: they build it in the wall behind a waterfall. Then they can only get to their nest by diving through the raging water – but the young are safe.

Between March and June, the female incubates four to six eggs. The young hatch after 16 days and fledge after 19 to 25 days. Little dippers learn quickly: as soon as they fly, they can also dive and swim. Dippers even raise two broods in a year in warm regions.

How do dippers communicate?

Dippers trill and whistle alternately and also make scratchy sounds. When they fly over the water, they call out “ztiittz” or “zit” loudly.

What do dippers eat?

Underwater, dippers mainly hunt aquatic insects, larvae, and amphipods. They do not eat larger animals, but from time to time they capture tiny little fish.