The coot got its name from the so-called “blaze” – that is the white spot on its forehead. He makes the coot unmistakable.

Coots belong to the rail family, which is why they are also called the white rail. A coot is about the size of a domestic chicken. It will be 38 centimeters long. The females weigh up to 800 grams, the males weigh a maximum of 600 grams. Their plumage is black. The white beak and the white spot, the horn shield, on their forehead are striking. The horn shield is significantly larger in males than in females. Coots are good swimmers, have strong, green-colored legs and broad, notched swimming lobes on their toes.

An imprint of the feet with these swimming rags is unmistakable: the toes with the rag-like border surrounding them stand out clearly in the soft ground. The coots can swim better with these flaps because they use them as paddles. The feet are also remarkably large: This distributes the weight and allows them to walk well over the leaves of aquatic plants.

Where do coots live? 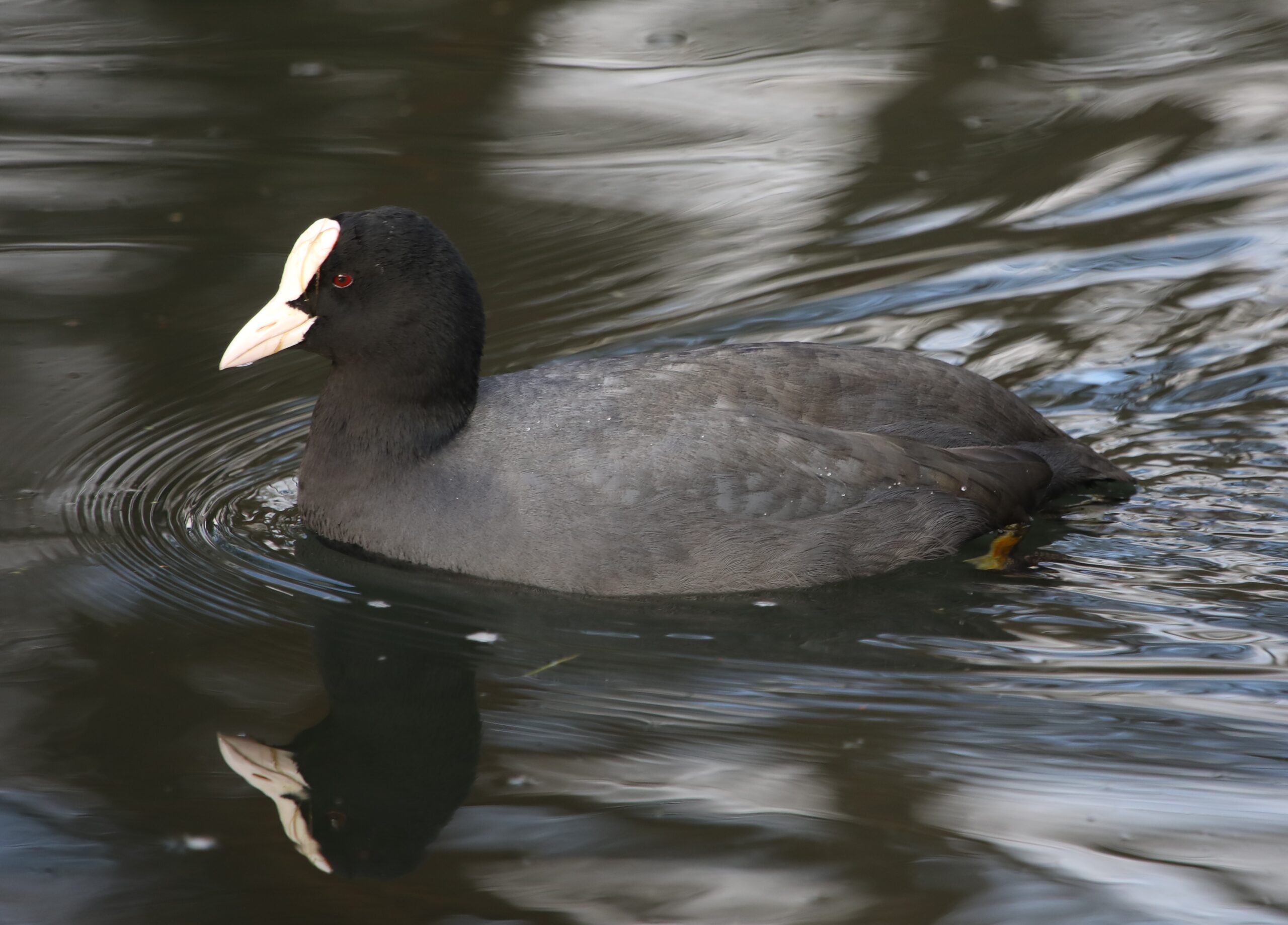 Coots are found in Central Europe, Eastern Europe to Siberia, North Africa, Australia, and New Guinea. Coots live on shallow ponds and lakes, as well as on slow-moving waters. It is important that there are plenty of aquatic plants and a red belt in which the birds can build their nests. Today they often also live near lakes in parks. In this protected habitat they can get by without a reed belt.

What types of coots are there?

There are ten different species of coots. In addition to the coot known to us, there is the crested coot with a bluish-white forehead that lives in Spain, Africa, and Madagascar.

The giant coot is found in South America, namely in Peru, Bolivia, and northern Chile. The probosci’s coot lives in Chile, Bolivia, and Argentina in the Andes at an altitude of 3500 to 4500 meters. The Indian coot is native to North America.

How do coots live?

Coots swim relatively slowly and calmly around lakes and ponds. Sometimes they come ashore to rest and graze. But since they are quite shy, they flee at the slightest disturbance.

During the day they can usually be observed on the water, at night they look for sheltered resting places on land to sleep. Coots are not particularly skillful flyers: they always take off against the wind and first have to make a run-up on the water surface for a long time before they can lift off into the air.

When disturbed, they can often be seen running across the water flapping their wings. However, they usually settle down again on the water surface after a short distance. Coots molt their feathers in summer. Then they cannot fly for a while.

Coots, while social birds, often fight with their peers and other waterfowl that come too close to them or their nest. Most of the coots stay with us during the winter. That is why they can be found in large numbers, especially during this time:

Then they gather on ice-free water areas that provide plenty of food. They search for their food by swimming and diving. But some animals also fly a bit south – for example to Italy, Spain or Greece and spend the winter there.

Friends and foes of the coot

Coots are still hunted – sometimes in large numbers, such as on Lake Constance. Natural enemies are birds of prey such as falcons or white-tailed eagles. But coots are brave: together they try to drive away from the attackers by making a lot of noise and flapping their wings letting the water splash up. Eventually, they dive and escape their enemies.

How do coots reproduce? 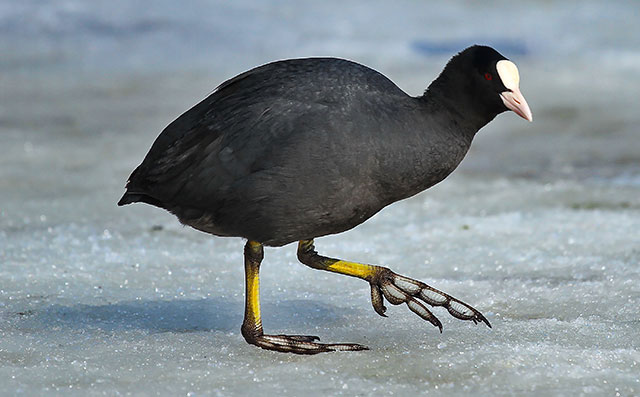 Coots breed here from mid-April until well into the summer. In March, the pairs begin to occupy their territory and build the nest together out of reed and cane stalks and leaves. During this time there are also real fights – not only between the males but also between the females. They defend their territory with wing beats, kicks, and beak smacks.

The nest, which is up to 20 centimeters high, consists of plant material and usually floats on the water. It is attached to the bank with some stalks. A kind of ramp leads up from the water to the nest. Sometimes coots also build a semicircular roof over the nest, but sometimes it is open. The female lays eggs seven to ten five centimeters long, which are yellowish-white to light gray in color and bear small, dark spots.

Breeding takes place alternately. The partner that is not incubating at the moment retires to sleep in a specially built sleeping nest at night. The young hatch after 21 to 24 days. They are dark in color and have yellow-red downy feathers on their heads and a red beak