People are said to have copied a dance from the roosters of the black grouse: the Bavarian Schuhplattler is said to have originated from their courtship dance!

Like the grouse, black grouse belong to the group of grouse and are among the most beautiful of our native birds. They are about the size of a domestic chicken, i.e. about 40 to 55 cm long. The males weigh between 1200 and 1300 grams, the females only weigh 750 to 1000 grams. While the females wear brown-beige plumage, with which they are excellently camouflaged, the males are iridescent blue-black in color and have one on each of the wings white spots, and a stripe.

The so-called roses sit on the head above the eyes: These are two bright red thickenings. Overall, black grouse look quite similar to grouse, but they are significantly smaller. In addition, the tail feathers of the males are curved outwards. This is how black grouse can be distinguished from wood grouse at first glance. The tail feathers of the females are distinctly forked.

Black grouse are adapted to live in harsh climates. Their plumage also protects them from the fierce cold and even covers their legs.

Where do black grouse live? 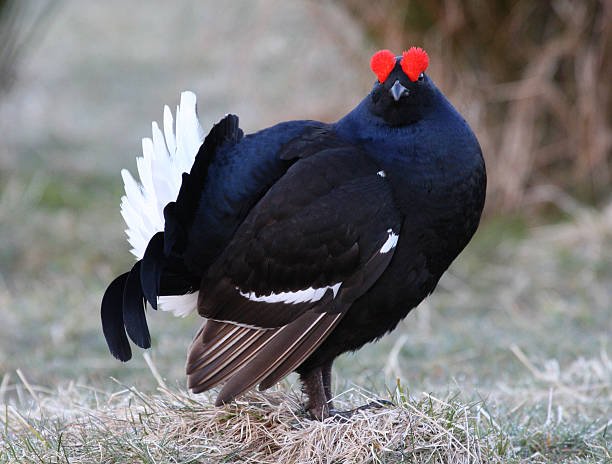 Black grouse were once distributed from England across central and northern Europe, through Eastern Europe and Siberia to the Pacific coast. In Germany, they have become very rare today. Only in the North German Plain, in the Bavarian Forest, and in the Alps are there still some of these birds.

Black grouse live in moorland and heathland between shrubs and heather. Because many of our moors have been drained in order to use them as fields for agriculture, the black grouse are finding less and less suitable habitats here.

In the mountains, they live between the forest and tree line, where they find open patches, small clumps of trees and shrubs.

What types of black grouse are there?

How do black grouse live?

Black grouse are sedentary birds. Once they have conquered territory, they live there for many years. Black grouse are diurnal and wake up early in the morning. They roam through the bushes and heather in search of food. However, they always stay in areas where they can quickly seek refuge under trees and dense bushes in case of danger.

March and April is the mating season for the black grouse. However, animals that live in the high mountains do not begin courtship until May and June. Courtship is a magnificent spectacle. The black grouse displayed either alone or in groups of five or more animals.

In the past, when there were still many black grouse, up to 50 animals are said to have performed their courtship dance at the same time. Black grouse fly into the courtship area early in the morning. Then they make lots of strange noises: they blow and hiss, roll, rumble, and gurgle. They fan the feathers of their tails apart and lift their wings slightly.

And on top of that, they keep jumping up to a meter high in between. Because they fluff up the rest of their feathers during this courtship dance, the roosters appear much larger than they really are. With this dance, they attract the hens, court them and eventually mate with them. Sometimes it happens that black grouse and capercaillie mate. The resulting hybrids are called Rachel chickens.

In winter, black grouse dig their own snow caves in which they spend the nights and also very cold days to be protected from the cold. They then spend up to 22 hours in this burrow, only leaving early in the morning to feed briefly.

Friends and foes of the black grouse 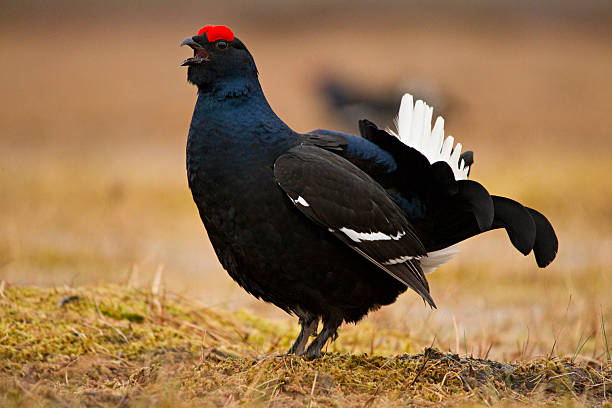 Especially birds of prey like the hawk can be dangerous to black grouse. Above all, small black grouse chicks fall victim to them. But foxes and carrion crows also hunt black grouse. In the past, however, they were also often hunted and stuffed by humans.

How do black grouses reproduce?

Incubating and raising the young is the responsibility of the females in black grouse. They lay seven to twelve eggs in a hollow-shaped nest on the ground and incubate them in about 25 days. The little black grouse are precocial, which means they leave the nest immediately and follow their mother.

They can fly for two weeks and are independent at four weeks. However, they often stay together well into the winter. In August, the feathers on the necks of cockerels are slowly turning blue-black, and by October they are already wearing the plumage of an adult black grouse.