For the Indians of South America, the condor was once considered a messenger of the gods. Today, the majestic birds are threatened with extinction and are under protection.

A condor can be recognized at first sight: the body of the mighty birds is up to 110 centimeters long and they have a wingspan of up to 320 centimeters. The males weigh up to twelve kilograms, the females up to 9.5 kilograms. Their plumage is predominantly colored shiny black.

However, the upper elytra and secondaries are glossy silvery white. The fluffy, white ruff is typical, from which the bare, red neck and head clearly stand out. The males are easily distinguished from the females: firstly by their size, secondly by the red flaps of skin on their throats, and thirdly by the fleshy crest that extends from the base of the beak to the crown of their head.

It is unusual that the eye colors of males and females differ: the males have gray eyes, the females red. Juveniles are brownish in color up to the age of about six years.

Where do condors live? 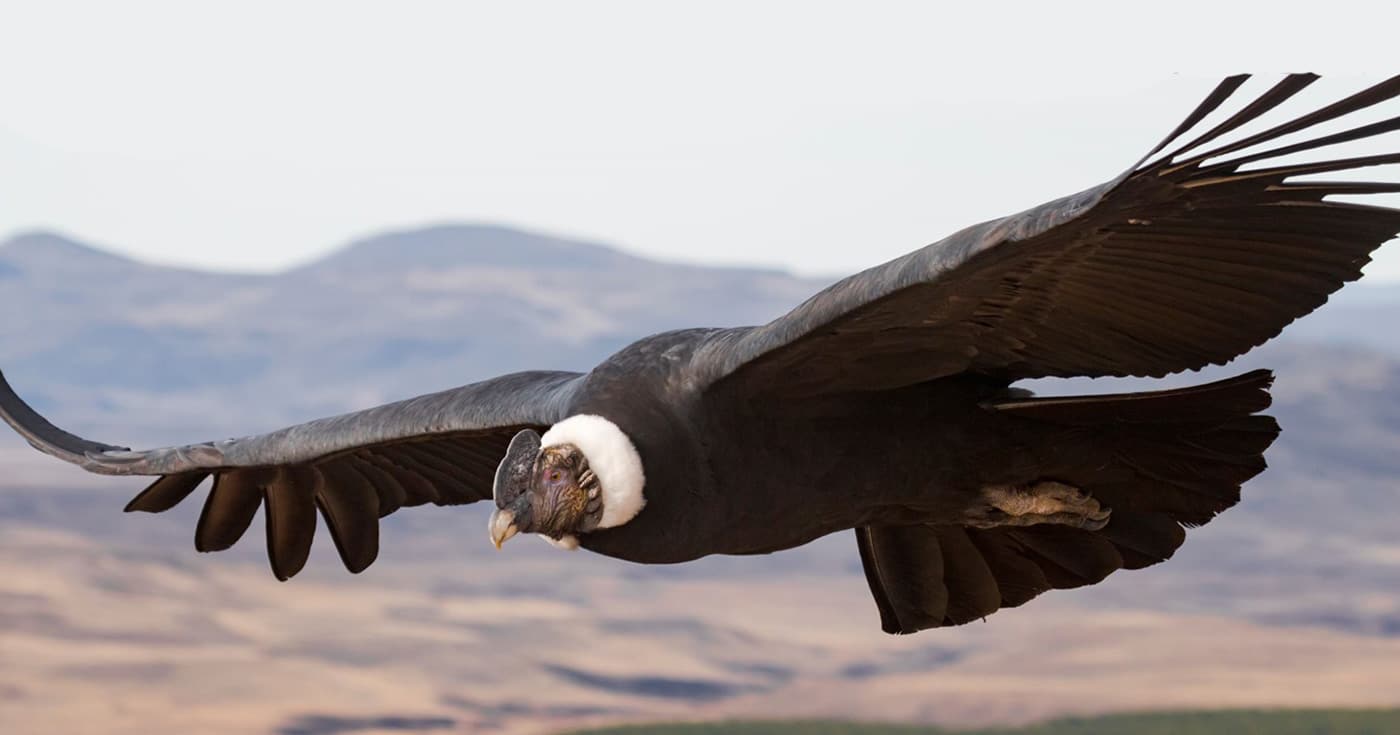 The Andean condor lives exclusively in South America from Venezuela to southern Argentina and Chile. There it is mainly found in the region of the huge mountain range of the Andes. The condor occurs mainly in the high mountain region of the Andes over 3500 meters above sea level. But it also lives in the foothills of the Andes: on the cliffs and rocks of the South American Pacific coast, for example in Peru.

What species of the condor are there?

The yellow-headed vulture and the turkey vulture are closely related to the Andean condor.

How old do condors get?

Condors live about 40 years in the wild, but up to 85 years in captivity.

How do condors live?

Condors are very different from Old World vultures in their skeletal, muscular, and many other characteristics. Some scientists are therefore even of the opinion that they are more related to the stork birds than to the birds of prey. The New World vultures are an ancient group of birds: They lived on earth about 60 million years ago. Fossil finds of extinct ancestors of the condor have a wingspan of five to six meters.

Condors are not only master fliers, they are also the largest flying birds of all: With just a few beats of their wings, they glide along the steep slopes of the Andes. They can reach speeds of up to 55 kilometers per hour and can be carried by the wind to heights of up to 7,000 meters.

They can also cover large distances: in their search for food, they fly up to 250 kilometers in one day. In rainy weather, however, they do not like to swing into the air, preferring to stay on the ground. During their flights, they circle at high altitudes and only land when they have discovered food – mostly carrion.

Unlike most birds of prey, however, they do not carry their prey away, but eat it on the spot. Because they primarily eat carrion, condors are considered the health police of the Andes: they make sure that no remains of animals killed or perished by predators are left behind. In this way, no plagues and diseases can spread.

However, condors also hunt and are capable of killing lambs, calves, or wild animals. Unlike most birds, condors are very good at smelling. Although they are unsociable birds, they tend to be with the same mate throughout their lives.

There is a legend among the South American Indians about how condors die: It is said that they do not simply die or become prey to predators when they are old and sick. It is said that they soar as high as they can in the air and then swoop down until they are smashed on a rock face. However, one does not know exactly whether this story is true.

Friends and foes of the condor

Condors have few natural enemies. Predators can only become a threat to very old or sick birds.

How do condors reproduce? 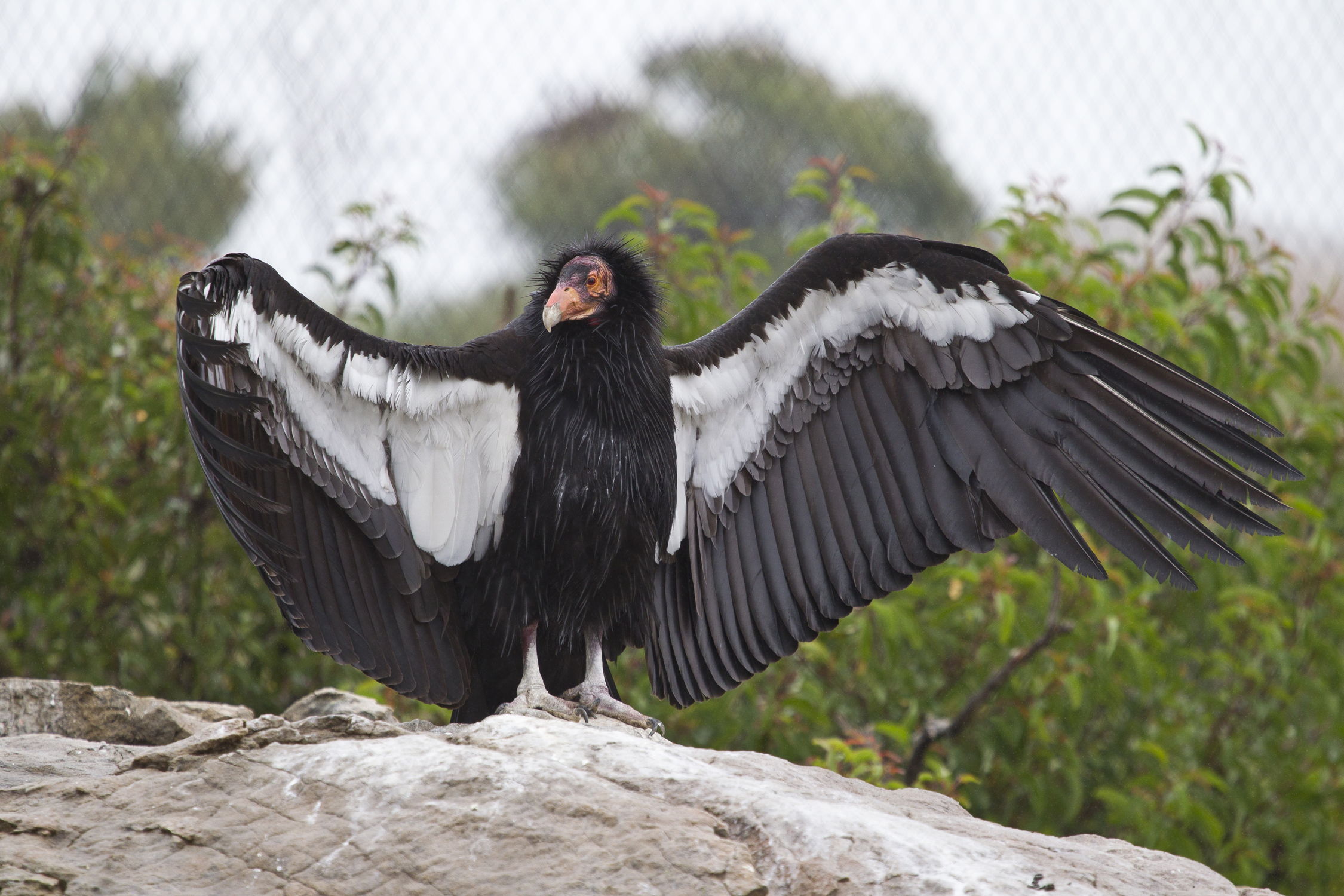 Condors do not become sexually mature until they are six to seven years old and only breed every two years. Then, in spring, the females usually lay a maximum of two eggs weighing around 280 grams, which are hatched on the ground, in tree cavities or crevices in rocks. When condors build a nest, they often erect it on rocks – even in places that are exposed to wind and weather.

Both parents incubate alternately. The chick hatches after 55 to 65 days. It is fed by both the male and the female for several more months. Young condors are only fully grown after six months and can then also fly. However, their parents only leave them when they are 18 months old.

How do condors communicate?

Condors don’t make many sounds: they only make a clatter of their beaks and a hiss.

What do condors eat?

Condors feed primarily on carrion. However, they only eat it while it is still reasonably fresh and not spoiled. At the places where they find carrion, several condors sometimes congregate. From time to time they fight over the food. Coastal condors eat dead fish and seals. Sometimes, however, condors also hunt small mammals such as lambs and calves.