Chinchillas are very curious, adventurous animals, but during the day they need their sleep.

Chinchillas look a bit like little rabbits or squirrels, but have long, powerful back legs and short front legs. Their large ears and eyes and long, bushy tail are striking. Their thick, super fluffy, soft fur protects them from both cold and heat.

Chinchillas are rodents and are closely related to guinea pigs and capybaras. Compared to a guinea pig, however, they are quite large: they are 25 to 35 centimeters long, the tail measures 15 to 20 centimeters and they weigh 400 to 600 grams. Wild chinchillas have light or dark gray fur that is lighter and sometimes almost white on the abdomen. The chinchillas we keep are a cross between the long-tailed and the short-tailed chinchilla.

Breeding has resulted in different fur colors: there are chinchillas with white or very dark, almost black fur. Some chinchillas are also beige, blond, or even spotted.

Where do chinchillas live?

Chinchillas come from South America. They live in Peru, Bolivia, Chile, and Argentina high up in the mountains of the Andes up to 5000 meters altitude. 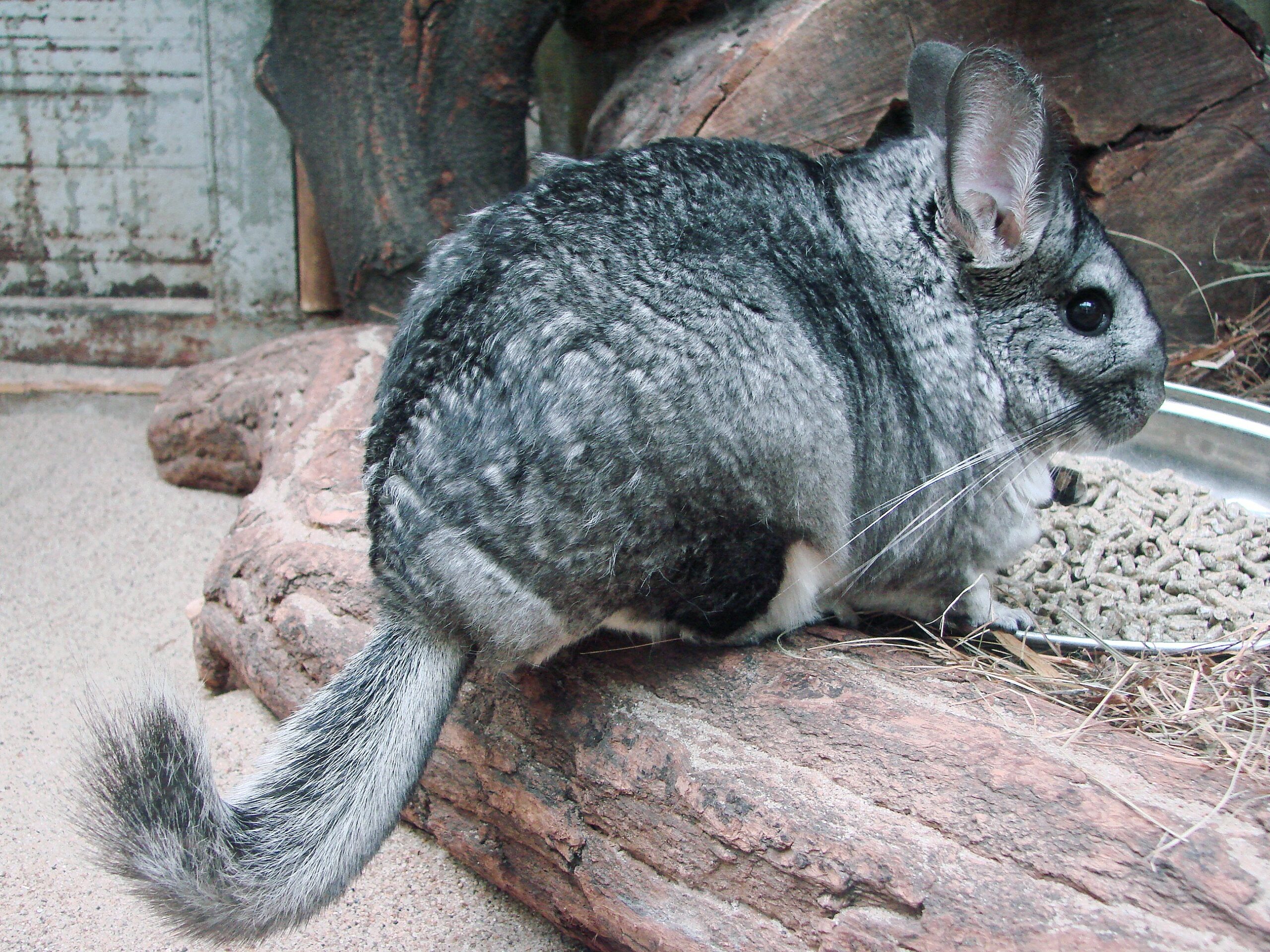 The homeland of the chinchillas is a barren, harsh country: it gets very hot during the day, but it is bitterly cold at night. The habitat of the chinchilla is very dry. The only thing they have to drink is the dew or the water they take in from plants and fruit.

What chinchilla species are there?

How old do chinchillas get?

How do chinchillas live?

Chinchillas really wake up in the evening: they are nocturnal animals. During the day they absolutely need rest and sleep. Chinchillas are insanely curious: they run and climb all over the place, examining everything they find.

For chinchillas, this means that they will gnaw and nibble on everything because they always want to find out whether something is edible or not. On their tours of discovery, they often stand up on their hind legs and see what is happening around them.

If they find something interesting they will grab it in their front paws and nibble on it. With their powerful hind legs, they can jump quite far.

Wild chinchillas live in crevices and caves. They often live there together with the chinchilla rats that have created and dug the burrows. They search for food at dusk and at night. They only return to their burrows in the morning.

Chinchillas don’t like to be alone. Therefore, you should always keep at least two chinchillas. Adult chinchillas usually get along well and are very peaceful. They enjoy sitting snuggled up close to each other in their bunkhouse while resting and sleeping.

Wild chinchillas live in pairs in large groups of over a hundred animals. Usually, grandmothers, mothers, and daughters live peacefully together with a male in a group. However, the young males are chased away by their fathers when they are adults and have to find a new territory.

Chinchillas spend a lot of time grooming. They particularly enjoy a sand bath. This is not only good for their fur – they can also relax wonderfully.

Friends and foes of chinchillas

Wild chinchillas need to be wary of raptors and owls. Sometimes they are also hunted by foxes or stink martens. However, there are only a few chinchillas left in the wild today: they were often hunted by the European conquerors in South America in the 18th and 19th centuries because their fur was in great demand to make jackets or coats.

How do chinchillas reproduce?

111 days after mating, the female chinchilla gives birth to three to four young. They are just about the size of a matchbox and weigh only 30 to 55 grams. After birth, the newborn boys slip under the mother’s belly immediately, where they are warmed and licked dry. With a light bite on the neck, the mother checks whether the young are healthy and alert. If it responds with a loud squeak, everything is fine.

Chinchillas grow fast. After a week they are twice as heavy as when they were born and can climb up the cage bars. Chinchilla babies are nursed for six weeks. They are independent at about nine weeks.

How do chinchillas communicate?

Chinchillas can squeak, squeak and scream. Young chinchillas sometimes scream loudly when they encounter adult animals. With that they want to say: I’m still small and you mustn’t harm me! Chinchillas express anger and resistance with a short cough-like sound.

What do chinchillas eat?

Chinchillas are vegetarians. In their homeland, they eat steppe grasses, leaves, fruits, and the bark of bushes. With us, chinchillas mainly get hay and ready-made feed, which is made from different types of grain and hay. Nuts or rabbit food make chinchillas sick. And they are only allowed to eat small amounts of fruit or salad. As a treat, you can occasionally give a raisin, half a nut, or a piece of apple or carrot.

A chinchilla cage must be large enough because the animals spend most of their awake time in the cage. Flying aviaries are also well suited for birds, in which the chinchillas have plenty of space.

Because chinchillas will gnaw on anything, eat anything and then get sick, it’s important that the bottom tray is metal. The grille must also be made of metal and not plastic.

In the cage, chinchillas need a sleeping house, a sand bath, two to three perch boards, plenty of climbing branches, and a few clay tubes or pieces of cork oak to play and hide. And of course a feeding bowl and a water trough. It is very important that the cage is in a place where the animals are undisturbed during the day. Usually, you don’t notice the chinchillas when they are stressed. However, if repeatedly awakened during the day, chinchillas will eventually become ill and die. 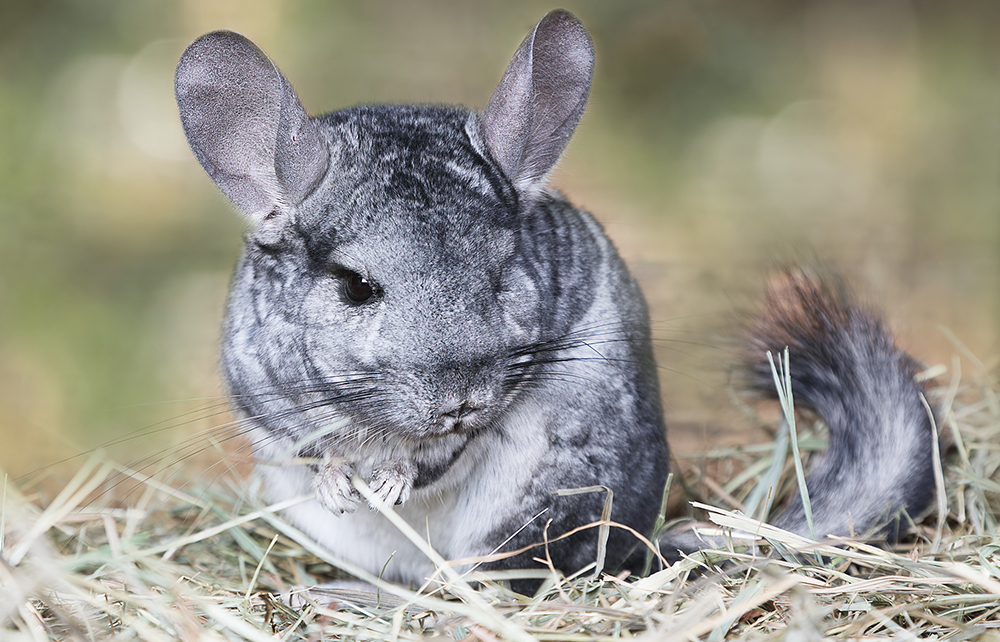 Chinchillas need regular exercise in the room. You have to take very good care of them so that they don’t damage anything and don’t eat anything that could make them sick. Because chinchillas are quite demanding and are mostly active at night, they should always be looked after by an adult.

The food and drinking water of the chinchillas must be changed daily. And of course, you have to check every day whether the animals are still healthy and happy.

The sand bath must be cleaned and renewed at least twice a week. In addition, the cage must be thoroughly cleaned with hot water every week and the water bottle rinsed thoroughly. Once a month you have to clean the climbing branches and the seat boards with hot water.