In the famous French drama The Hound of Aubry, a Briard brings justice and convicts a murderer. To this day, dogs are loyal helpers in many different areas. As pure companion dogs, they feel challenged, so each of the noble dogs should also have a noble task that they will certainly master with flying colors. You can find out what the breed can do in this short guide:

Contents show
1 Herding Dog with Distinctive Mane – The Briard’s appearance
1.1 The Berger de Brie from head to tail
1.2 Fur and colors
1.3 These colors are considered purebred
2 History of the Briards – A working dog through and through
2.1 Working dog in all areas
2.2 Ancestors and descendants of the breed
3 Briard Character: A Role Model for Many Working Dogs
3.1 Characteristics of the breed at a glance
3.2 No dog for beginners!
4 Advanced Training – This is Necessary for Keeping Briards

The Briard is a medium-sized, shaggy-haired German shepherd with long hair obscuring facial features and eyes. Measured at the withers, males reach a height of 62 to 68 cm, females are smaller and slimmer with an ideal height of 56 to 64 cm. A specific weight is not specified in any breed standard.

The Berger de Brie from head to tail 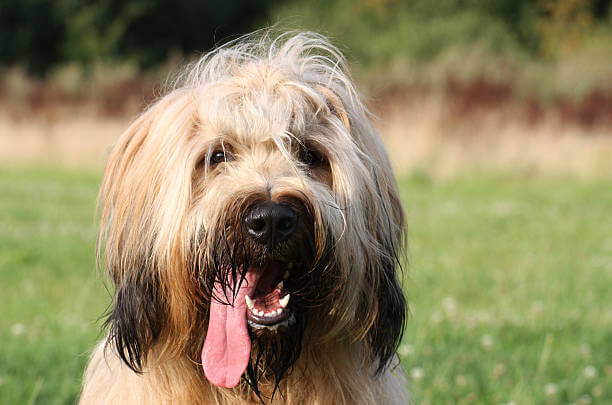 The sleek hair is described as dry and goat-like. The undercoat is present but not particularly dense. The topcoat of adult dogs should never be shorter than 7 cm and should never be light in color.

These colors are considered purebred

History of the Briards – A working dog through and through

Long known as the Chien de Berger français de Plaine (French Lowland Sheepdog), the Berger de Brie defended flocks of sheep and farms against wolves. The first breed standard from 1897 describes two types: the Briard with a curly coat and the one with a long goatskin. The curly coat disappeared over the last century and is no longer found today. The breed has been officially recognized by the FCI since 1954.

Working dog in all areas

Ancestors and descendants of the breed

Briard Character: A Role Model for Many Working Dogs

Some sources describe Briard as calm, while others describe him as spirited. Both are probably true since he is very good at distinguishing between periods of rest indoors and periods of activity outdoors. Because of its pronounced protective and herding behavior, it cannot be kept as a pure companion dog, but it needs meaningful employment as a working dog. It is therefore hardly suitable for keeping in the city.

Characteristics of the breed at a glance 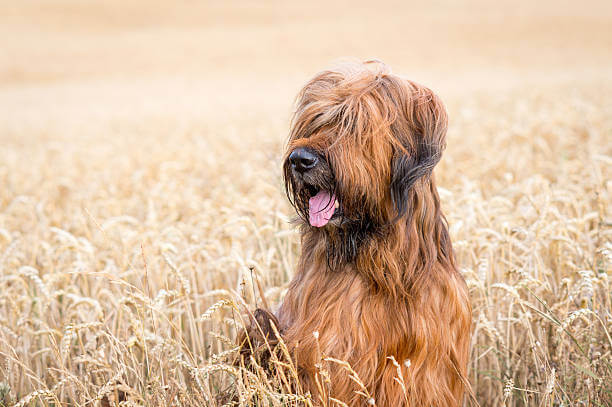 No dog for beginners!

The Briard knows how to get his way in the herd – this also applies to the family, which he likes to lead and protect like little sheep. The breed is therefore unsuitable for first-time owners, as otherwise they often get their way and can hardly be educated. Experienced owners with a meaningful task for their four-legged friend (police, customs, ski rescue, therapy, etc.) are the right companions for the shaggy dogs.

Advanced Training – This is Necessary for Keeping Briards

Briard puppies are considered difficult to train and need consistent but loving guidance. The intelligent dog wants to be busy all day long, but must not be overwhelmed physically or mentally when it is a puppy. You will not meet the demands of an adult dog with daily walks and sports units. Therefore, the breed is only recommended for owners who are involved in professional dog sports or need a working dog for their job.