Alpacas are the slightly smaller relatives of the llamas. They are famous for their very fine, warm wool.

Like the llamas, the alpacas belong to the camel family and thus to the calloused and even-toed ungulates. Because they only live in South America, they are also called New World camels.

Alpacas have long legs and long necks. Like all New World camels, however, they have no humps. Measured to the back, adult alpacas are between 80 and 100 centimeters high and weigh around 65 to 80 kilograms. On average, they are significantly smaller and lighter than llamas.

Their fur is very long, the hair can grow up to 50 centimeters. It is usually monochromatic brown, black or dark grey, sometimes apricot-colored. Some animals are even spotted. Alpacas live in higher and therefore colder regions than llamas. That is why the undercoat under the long fur is much denser and finer than that of the llama.

Their head shape is triangular, the ears are straight and spear-shaped. The upper lip is split and formed into a small prehensile organ with which they can pluck grass and leaves. They have a soft sole cushion under the hooves. Because of this, they can graze on the steepest slopes without destroying the soil.

Where do alpacas live? 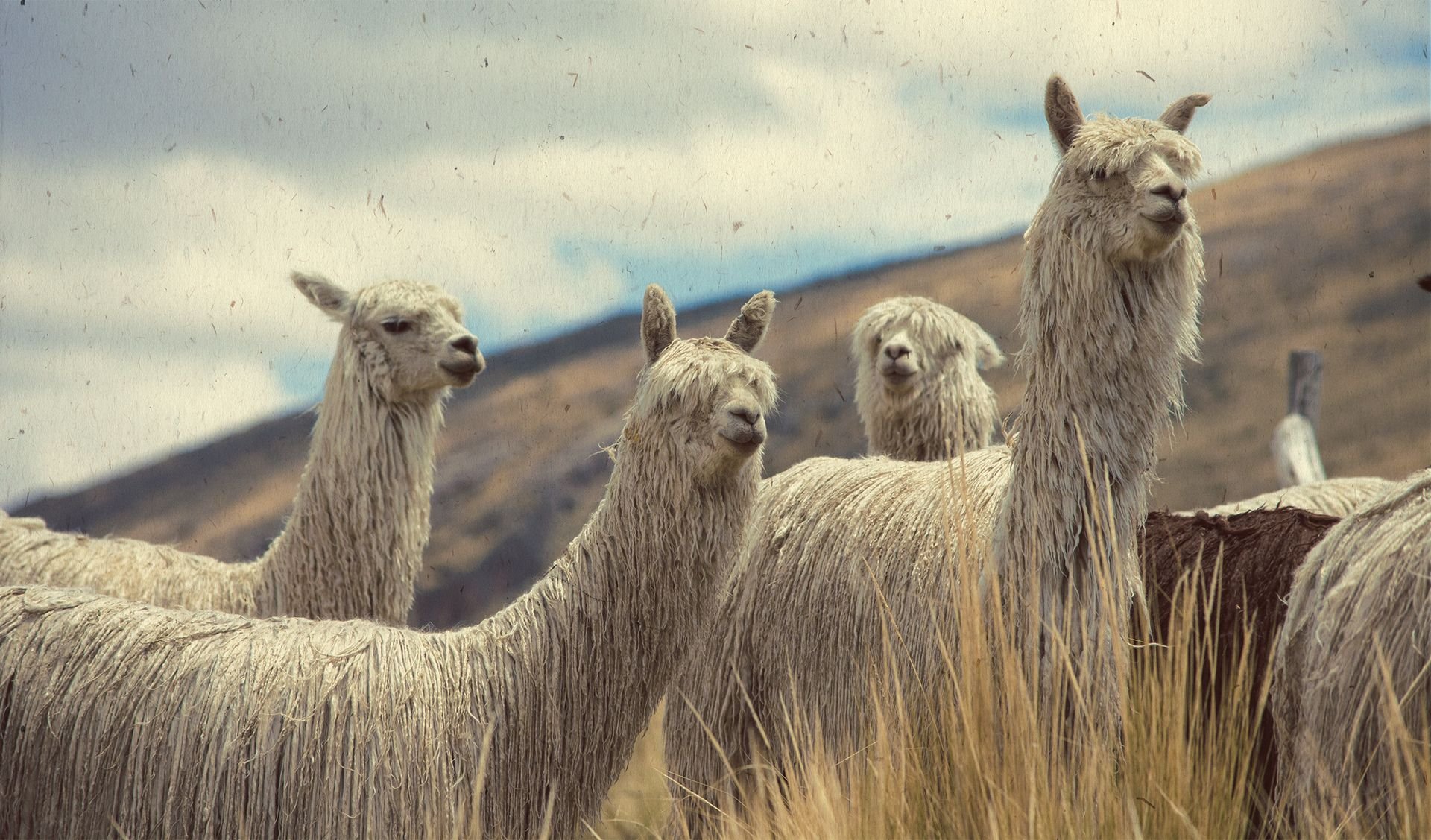 Alpacas live exclusively in South America and there mainly in the regions of the Andes.

Because they are bred pets, alpacas can be found in different habitats: for example in the high mountains, in the grasslands, in the steppe, or in the semi-desert. However, they are mostly found at higher altitudes because they are perfectly adapted to life in cold climates. Most alpacas can now be found in southern Peru and western Bolivia.

What species is the alpaca related to?

In addition to the wild guanaco, which is the wild form of the alpaca and llama, there is also the wild vicuña in South America. It is much smaller and more delicate than the llama and alpaca and is only found at very high altitudes, between 12,000 and 15,000 feet.

There are two types of alpacas: The Huacaya alpaca, which has dense and full wool that is crimped. And the Suri Alpaca. On the other hand, it has a rather curly coat. Suri alpacas are much rarer than Huacaya alpacas, making up only about ten percent of the animals.

How old do alpacas get?

Alpacas are robust animals, they can live up to 20 years.

How do alpacas live?

Alpacas were probably bred by the Indians in South America around 5000 years ago. For a long time, it was thought that only the wild guanaco was the ancestor of the alpaca. Today it is assumed that the alpacas descended from both the guanaco and the vicuna.

Alpacas were bred by the Indians mainly because of their very fine and warm wool. Llamas, on the other hand, served more as transport animals. In ancient times, the Inca rulers who lived in present-day Peru kept large herds of alpaca and wore alpaca coats. That was the way they showed their wealth.

When the Spanish conquered South America, the alpaca was supplanted by sheep for many years. Only recently has the value of wool been recognized again, and so today more and more alpacas are being kept and very expensive and precious items of clothing are made from alpaca wool.

Alpacas are strictly herbivores. However, they are not “real ruminants” like our cows, but only have a three-part stomach. Like llamas and guanacos, alpacas are very social animals. They only feel safe and secure in a small herd.

Friends and foes of the alpaca

Only large predators like the puma can become dangerous to the alpacas, especially the young ones.

How do alpacas reproduce?

Alpaca females can be sexually mature as early as one year, while males are only two and a half to three years old. An alpaca mare usually only has one young per year. It is born after a gestation period of eight to eleven and a half months. The young are then suckled by the mother for six to eight months.

The mare can mate with a stallion again just two to three weeks after birth. Formating, which lasts 15 to 45 minutes, the female lies down on the ground. If an alpaca mare does not want to mate, she will very clearly call out and spit at the stallion.

How do alpacas communicate? 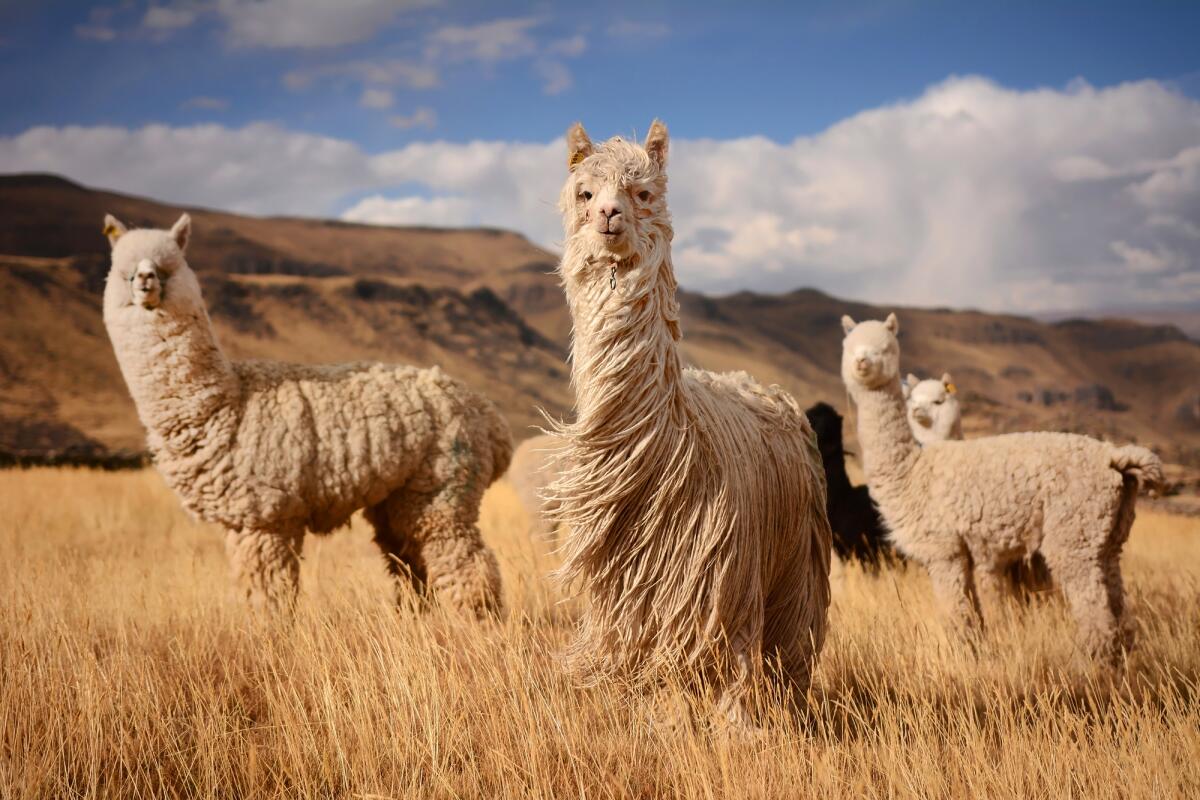 Alpacas make many different sounds, but mostly a low hum. They also have distinctive body language. One of the most effective means of communication is the famous spitting: This is how the animals show their displeasure and anger.

What do alpacas eat?

Alpacas are strictly herbivores. In their homeland, they graze the barren grass of the Andes. If they are kept with us, they only eat grass and some hay in the summer and almost exclusively hay in the winter. Only broodmares and young animals get some concentrated feed. Under no circumstances should you overfeed the animals, otherwise they will get sick.

Alpacas are now also kept by breeders in Germany, there are around 2000 animals. However, their wool is not as good as that of animals living in South America. Alpacas should never be kept alone, but always at least in pairs. It is even better if the animals can live in a small herd.

In addition, alpacas need regular exercise outdoors. It is best if they live in an open barn and can go outside whenever they feel like it. An area of ​​at least two square meters is required for each animal in the barn. The grazing area for two alpacas must be at least 1000 square meters.

If the alpacas only eat the grass in the pasture, at least 800 square meters are required per animal.

If you keep alpacas with us, they have to be sheared once a year or at least every two years. Toenails are checked every two months and trimmed if necessary. In addition, alpacas must be treated against worms four times a year and vaccinated annually.