The egg snake lives up to its name: it feeds exclusively on bird eggs, which it swallows whole.

Egg snakes belong to the reptiles and are there to the snake family. They are rather small, usually only 70 to 90 centimeters long, but some are also more than 1 meter long. They are usually brown in color, but sometimes gray or black. They have black diamond-shaped spots arranged like a chain on their backs and sides.

Their abdomen is light in color, the head is quite small, it hardly separates from the body. The pupils in the eyes are vertical. The teeth are very much receded and can only be found very far back in the lower jaw. They have a series of folds of gum tissue at the front of their jaws that they use to hold the eggs they eat like suction cups. 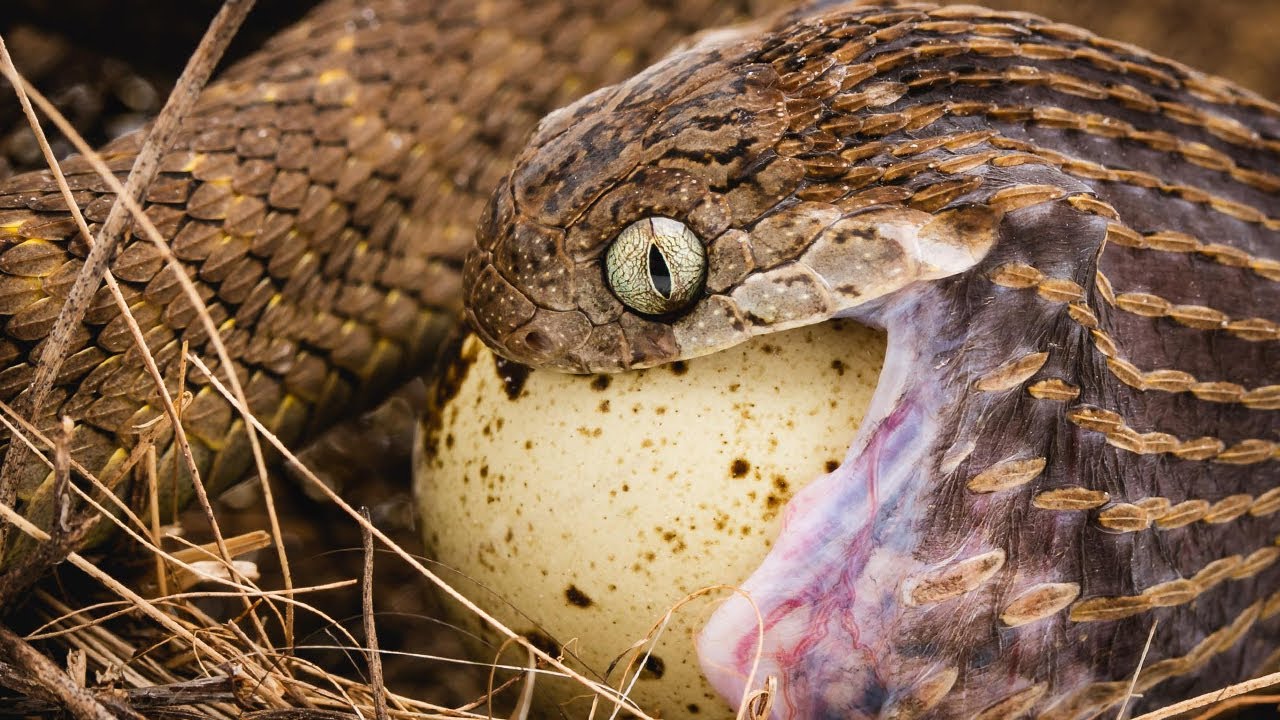 Where does the African egg snake live?

African egg snakes are only found in Africa. There they are at home in southern Arabia, southern Morocco, north-east Africa, and in the east and central Africa to South Africa. To the west, you can find them as far as The Gambia.

Because egg snakes have a fairly large distribution area, they are also found in quite different habitats. They are most commonly found in woodland and scrubland where they prefer to live in trees. But they also stay on the ground. They like to use bird nests that they have plundered as hiding places. Egg snakes are not found in rainforest areas and in the desert.

What species of African egg snakes are there?

There are six different species in the genus of the African egg snake. There is also the Indian egg snake. It is relatively closely related to its African counterparts and belongs to the same subfamily as the African Eggsnake but in a different genus.

How old does the African egg snake get?

African egg snakes can live up to ten years in the terrarium.

How does the African egg snake live?

African egg snakes are mostly active at dusk and at night. They are completely harmless to humans because they are not poisonous. In fact, they become quite tame in captivity. In nature, however, they can be aggressive when threatened and will bite. When threatened, egg snakes curl up and raise their heads. Because the neck is flattened, they look like a cobra.

Then they unroll themselves, the scales of their skin rubbing against each other. This creates a rasping noise. They also inflate their bodies to appear larger and impress enemies. Most interesting, however, is their feeding technique. Egg snakes feed exclusively on eggs. Other species of snakes also eat eggs, swallowing an egg and crushing it with their body.

However, egg snakes have developed a very special method. They open their mouths wide and swallow the egg. Muscles press the egg against sharp, spike-like vertebral processes that slash open the egg like a saw. The contents flow into the stomach.

The eggshells are squeezed together by the blunt ends of some vertebrae and are regurgitated by the snake. Egg snakes can stretch their mouths and the skin of their necks extremely far. A snake, barely as thick as a finger, can therefore easily devour a hen’s egg that is much thicker than itself.

Friends and foes of the African egg snake

Predators and birds of prey can be dangerous to egg snakes. And because they look very similar to the poisonous night adder, they are often confused with them in their homeland and killed by humans.

How does the African egg snake reproduce?

Like most snakes, egg snakes lay eggs after mating. There are 12 to 18 eggs in a clutch. The young snakes hatch after three to four months. They are already 20 to 25 centimeters long.

How does the African egg snake communicate? 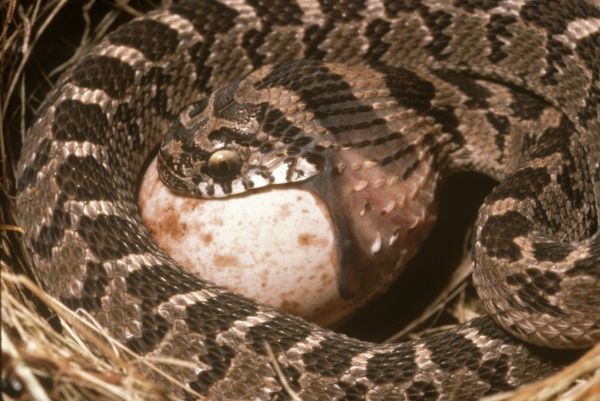 What does the African egg snake eat?

Egg snakes feed exclusively on eggs, which they steal from the nests of birds, especially at night. During spring and summer, egg snakes occasionally take a feeding break and fast for a few weeks.

Egg snakes are often kept in terrariums. They are fed with small bird eggs. They prefer to eat the eggs in the evening. The bottom of the terrarium should be strewn with gravel. Some larger stones serve as hiding places for the snakes to retreat to. They also need branches and plants to climb on and a container of freshwater.

A heater is very important because the animals need daytime temperatures between 22 and 32 degrees Celsius. A heat source from above is best. At night, the temperature can drop to 20 degrees. Lighting should be on for ten to twelve hours a day.