The Sugar Gliders are rightly named: They love sweet food and can glide through the air. In Germany, they are called Kurzkopfgleitbeutler.

Sugar gliders belong to the climbing possum family. So they are related to koalas and kangaroos. Like all marsupials, the females have a pouch on their abdomen in which the young grow up. They measure 12 to 17 centimeters from nose to bottom. The bushy tail is 15 to 20 centimeters long.

The animals weigh between 90 and 130 grams. Typical is their round head as well as the wing skin, which is stretched on the sides of the body between the wrists and ankles.

Their woolly fur is gray to bluish on the back and white to greyish on the belly. A wide, dark longitudinal stripe runs from the head over the entire body, and there is also a stripe on each side of the head from the nose over the eyes to the ears. The large eyes are striking – an indication that the sugar gliders are nocturnal.

Where does the Sugar Glider live? 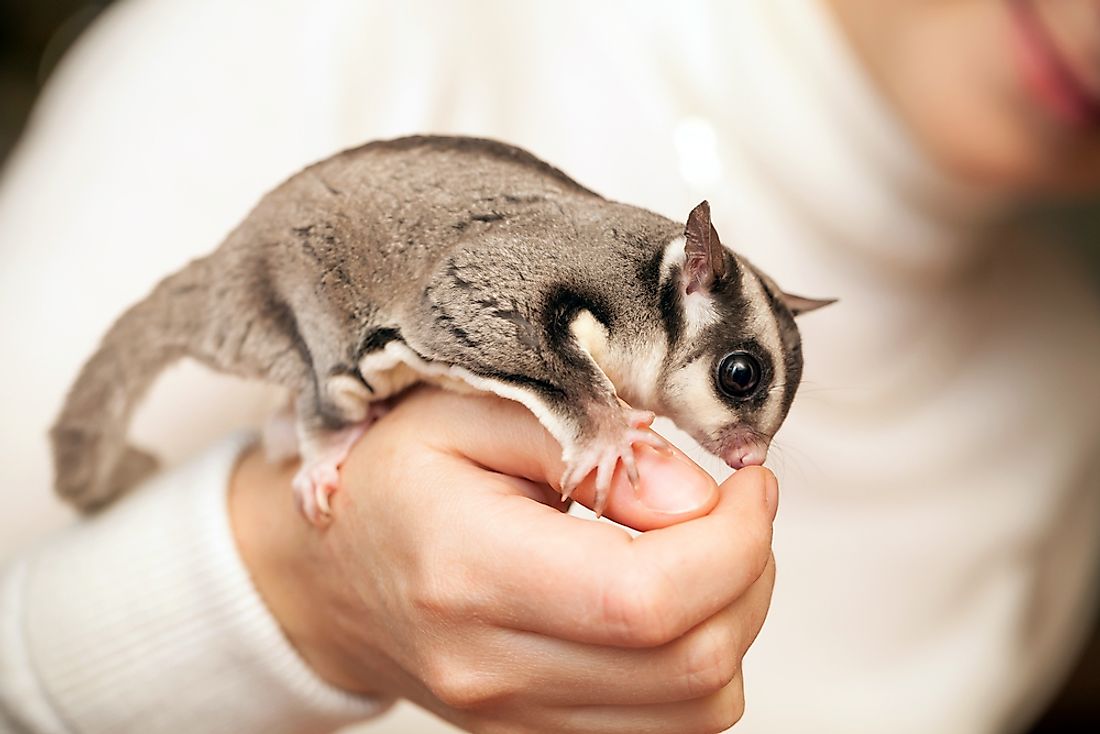 Sugar gliders live mainly in Australia from the east coast through the provinces of Victoria, New South Wales, and Queensland to the Northern Territories. They also occur on the island of Tasmania, which belongs to Australia, and on New Guinea. They inhabit tropical, temperate, and even cool climates in their homeland.

Sugar gliders live mainly in forests and inhabit tree cavities there. They prefer acacia and eucalyptus forests, but they can also be found in coconut plantations. It is important that they find old trees in their habitat because only they offer the small marsupials enough tree cavities to sleep and hide.

What types of Sugar Gliders are there?

How old is the Sugar Glider?

Sugar gliders can live up to 14 years.

How does the Sugar Glider live?

Sugar gliders are nocturnal and social animals. Males and females live together in groups of up to twelve animals. They live together on forage trees, which they fiercely defend against foreign invaders.

Group members recognize each other by smell. The males emit this scent from a specific gland and “perfume” all other group members with it. During the day, several of the Sugar Gliders sleep tightly snuggled together in their tree cavities. Only in the evening, when it gets dark, do they come out of their burrows, skilfully climb through the trees and go in search of food.

Sugar gliders can perform real gliding flights. In doing so, they stretch out their front and rear legs, stretch out their flight skin and thus glide from tree to tree. It is said that they can even fly distances of up to 70 meters in the air if the starting point is high enough.

However, they cannot actively fly like a bird. Their tail serves as a rudder for their gliding flights. To land, the tail is then raised almost vertically, so that it acts as the landing flaps of an airplane and slows the animal down. When the Sugar Gliders are sitting, they look a bit chubby due to their folded skin. In-flight, on the other hand, you can see that they are very elegant and slender animals.

Friends and foes of the Sugar Glider

Natural enemies of the Sugar Glider are various lizards, snakes, and owls. They all hunt the small marsupials. But even domestic cats can be dangerous to the animals.

How does the Sugar Glider reproduce?

In a Sugar Glider group, all females reproduce. When mating, the male wraps the female completely in his flight skin – like in a blanket.

After a gestation period of only two weeks, the females usually give birth to two, sometimes even four young, which are still tiny: They only measure two centimeters, look like real embryos, and therefore have to stay in the mother’s pouch for more than two months and grow there until they are large enough to survive outside the pouch. In the pouch, the still blind and deaf little ones suck on the teats. 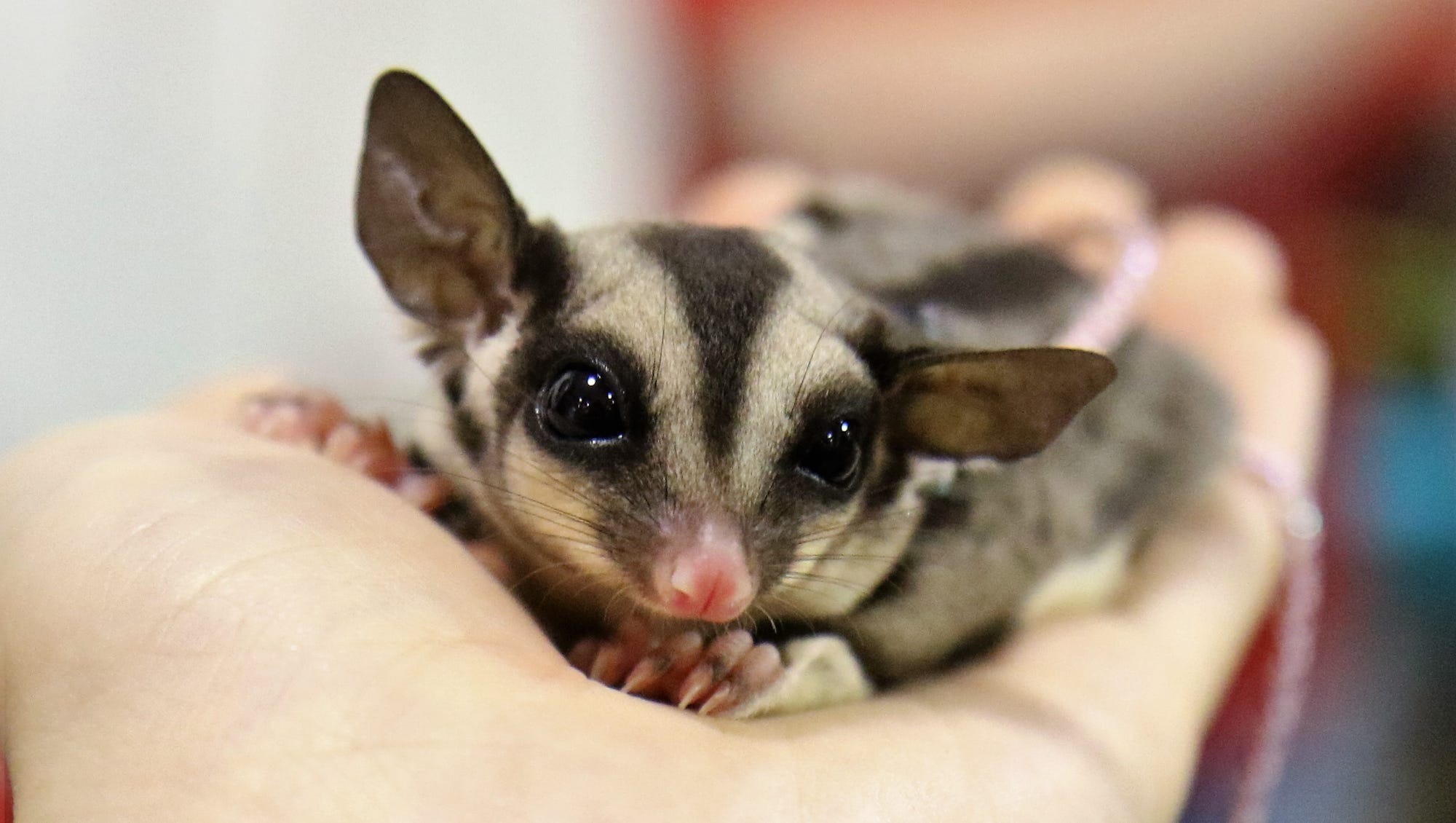 They are suckled for the first four months, then they switch to the food of the adult animals. Young sugar gliders become sexually mature at around one year old.

How does the Sugar Glider communicate?

Before they take off, sugar gliders make deep, unmistakable calls, which sound almost like moans, especially in the evening. Sometimes they also let out a loud scream.

What does the sugar glider eat?

Sugar gliders feed primarily on tree sap, sweet fruit, pollen, and nectar. That’s where they got their name from “Sugar” in English and translated into German means “sugar”. However, they are not pure vegetarians but also attack insects and even small rodents.

The attitude of the Sugar Glider

Sugar gliders are cute – but they are not suitable as pets because they are nocturnal and sleep all day.

They also need a relatively large cage with a floor area of about two square meters and two meters high. Only then can you set up the cage with many climbing branches and several sleeping houses in such a way that the animals feel comfortable. Also, you can only keep several animals together: If they live alone, Sugar Gliders will get sick.

In captivity, the sugar gliders are fed fruit and insects such as grasshoppers or house crickets.