The Somali is an inquisitive and active cat that descended from the Abyssinian. Find out everything about the origin, character, nature, keeping, and care of the Somali cat breed in the profile.

Somali cats are extremely popular pedigree cats among cat lovers. Here you will find the most important information about the Somali. The standard-compliant Somali corresponds overall to their “ancestors”, the Abyssinians, but can sometimes become somewhat larger and heavier. The Somali is of medium height, medium length, lithe and muscular. She has the following physical characteristics:

The Somali’s tail is quite long and bushy, somewhat reminiscent of a fox’s tail. Therefore, the Somali is sometimes referred to as the “fox cat”.

The Somali has medium-length fur that is particularly fine, dense, and soft. The breed-typical ticking allows for up to seven hair bands with the coat length of the Somali. It can take two years for the coat color to fully develop. The Somali is recognized in the colors “Feral/Apricot”, “Blue”, “Sorrel/Cinnamon”, “Fawn”. The colors “Lilac” and “Chocolat” also occur but do not belong to the breed standard. Especially in the winter coat, Somalis often have a ruff and panties.

Like their ancestors, Somalis are extremely cheerful, affectionate, affectionate, and intelligent cats. They are particularly curious like to play and climb. Somalis generally take great pleasure in games of all kinds, be they moving or intelligence games.

The Somali is not suitable for keeping alone. These sociable cats are best kept in pairs. The Somali also usually get along well with dogs and children. The active cat absolutely needs a scratching post that is as large as possible and has lots of activities.

Caring for the Somali is relatively easy, but must not be neglected. That means: Depending on the age and the condition of the fur, combing once a week is sufficient, and more frequently when the fur changes. The balanced, high-quality diet should meet the individual urge to move and be tailored to the age so that the cat remains agile and symptom-free into the mature years.

Somalis are energetic cats that are usually very robust when kept appropriately. With regard to hereditary diseases, however, they can be just as burdened as the Abyssinians. The most common hereditary diseases in the Somali are:

If you get a Somali, you should always check with the breeder to see if one of the parents has a hereditary disease! 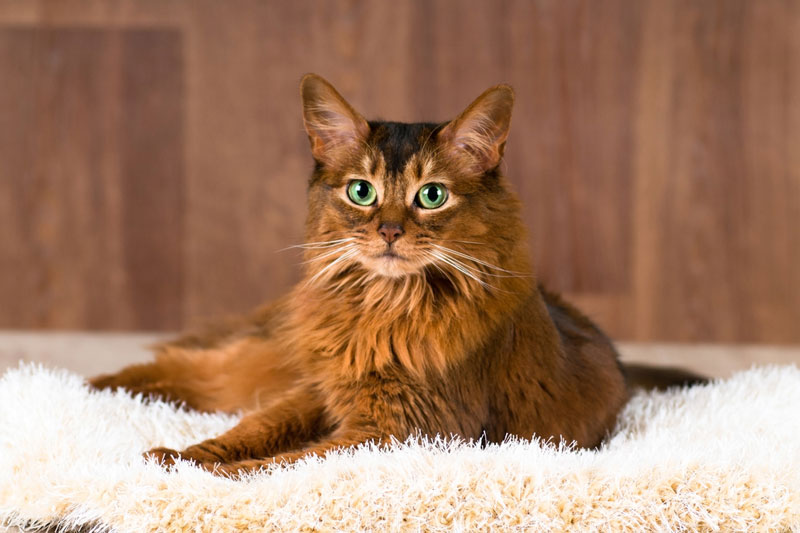 The Somali descended from the Abyssinian cat. The only difference between the two cat breeds is the length of their fur. At first, long-haired offspring were not wanted when breeding Abyssinians in England. But the US breeder Evelyn Mague had taken a liking to the long-haired Abyssinians and decided in 1965 to create a new breed with the help of interested fellow breeders: the Somali. Targeted breeding began in the 1970s.

The cats quickly made a splash, and in the 1977-78 show season, a whopping 125 Somalis wowed American audiences. A year later, a German breeder brought the first Somalis back to Europe, another 30 followed and provided an initial breeding base in several countries. Recognized in the FIFe since the early 1980s, they are now bred worldwide.