Crayfish used to be much better known than they are today. It was found in almost every body of water, was a constant part of the home kitchen, and a completely everyday occurrence. You can still observe these exciting animals today – in your own garden pond. In this entry, we want to explain how crayfish lives, what it needs, and how you can keep them in your own garden.

Contents show
1 Crayfish: General Information
2 The Crayfish in Your Own Pond
3 Behavior of Crayfish 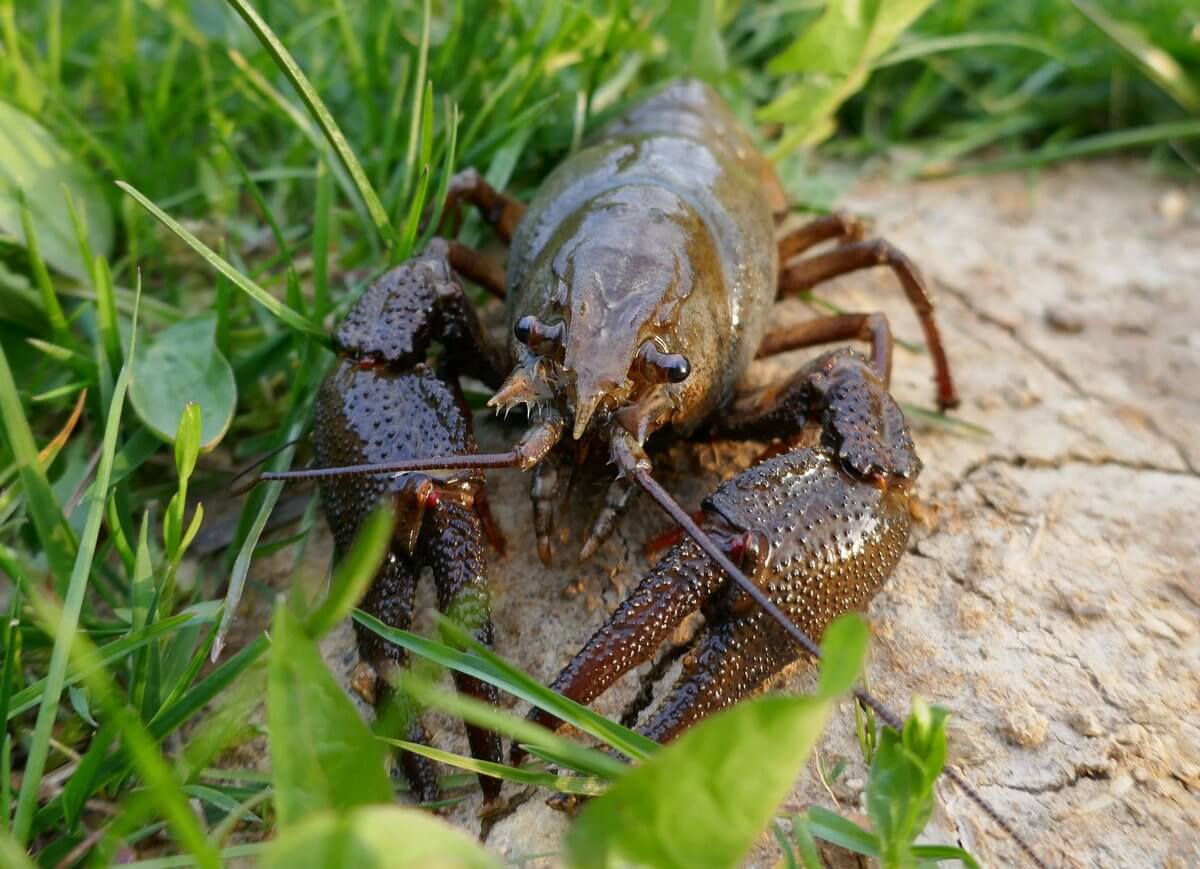 The European crayfish is, as its name suggests, an animal that lives all over the continent. It can be found all over Europe except Ireland, Northern England, and the Iberian Peninsula. It used to populate rivers and streams there, nowadays it lives – because of the crayfish plague – mainly in closed water systems such as quarry ponds, fish ponds, and gravel pits. It is important here that enough shelters are formed by stones and roots in the bank region. Because during the day the crab rests in a hiding place and only becomes active at dusk to go on the hunt.

The life cycle of the noble crayfish begins in June. Then the fully developed young hatch and stay with the mother until the first molt. Then they look for their own hiding place, as they are popular food for insect larvae, water beetles, and fish. Because they grow quickly, they molt up to ten times in the first year. After each molt, they are particularly susceptible to attacks and remain covered for the time being until the new shell has completely hardened.

When the сrayfish is 3 years old, it is fully grown and fully sexually mature. October is the time of mating, which is different from other animals. The male attaches a sperm packet to the underside of the female, which remains there for a month. Then the female begins laying down up to 400 eggs, which are fertilized by the sperm. It will now take 26 weeks for the young to hatch. During this period of time, the eggs stick to the underside of the female, where they are cared for and protected by him. Ultimately, however, only up to 20% develop into young animals, which then stay with the mother until the first molt.

Unfortunately, this small number also contributes to the fact that the number of noble crabs has declined threateningly. The main reason, however, is another: the сrayfish plague. This epidemic has almost wiped out сrayfish populations in Germany over the past 120 years. The blame is the import of the American crayfish, which carries the cancerous pathogen; himself he is resistant to the pathogen. The plague spread quickly due to the constant migration of the American crayfish out of ponds and lakes. Today the crayfish only has a chance if it is not kept together with American crayfish, these are prevented from constantly breaking out and the spread of the disease is thus stopped. But be careful when buying cancer! The two species are similar and can be easily confused. A bad buy here can mean the death of your own сrayfish.

The Crayfish in Your Own Pond

Keeping the European crayfish in your own garden is not difficult as long as the following is observed: The depth of the pond should be at least 1m. Since the crayfish makes high demands on the water, the pond should not be exposed to herbicides or pesticides. A suitable pH value is between 6 and 9, the oxygen content should be 5.5 mg / l or higher. For orientation: These values ​​are comparable to the needs of a carp. Crayfish do not like it too cold, the temperature of the water should be between 16 and 24 ° C in summer.

The nature of the pond is also important. Due to its special behavior, the crustacean needs edges that can be dug, stable soil and edge conditions, and a generous bank area. Keeping them in liner and pond basins is possible, but not ideal, as the digging possibilities are rather limited here. Crayfish spends a lot of time digging: it even builds self-dug tubes that it defends as its own apartment. But there is a second thing that is very important to сrayfish and that contributes significantly to its comfort of life: shelter! Regardless of whether it is large stones, roots, roof ridge tiles, clay pipes, or the like, the crayfish needs hiding places. Here it spends the day, hides when threatened, or eats its prey in peace. 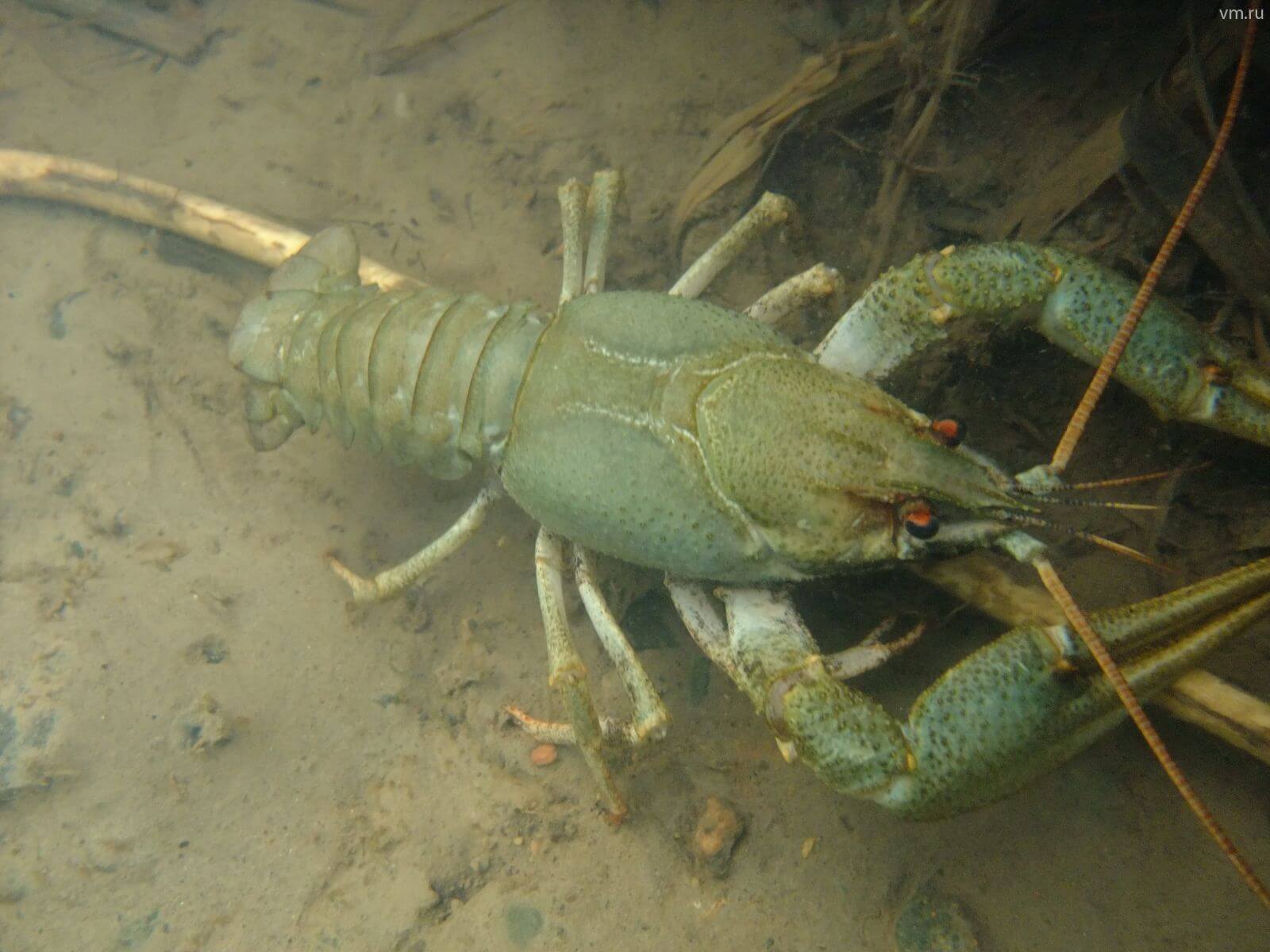 When it comes to eating, the crab is by no means as picky as it is when it comes to its pond requirements, because it is omnivorous. Dead fish, worms, snails, and insects are just as much on his menu as fallen leaves, plant remains, and algae. In general, you don’t have to worry about your own pond plants. Crayfish does not feed on living, but rather on dead parts of plants; these are softer and therefore easier to consume. Since they already find everything they need in the pond, it is usually not necessary to feed them. However, some owners want to treat their crayfish to something and throw vegetables, fish food, or eggshells into the pond. Crayfish enjoys that too.

Your pond will benefit from the fact that cancer is not such a picky eater. As they clean the water of organic residues, for example, dead plants and animals, they ensure good water quality. It is not for nothing that crayfish are also called “the health police of the pond”.

But what if you already have other residents in the pond? There is no clear answer to this question: In general, every pond inhabitant – regardless of whether it is fish, newt, or dragonfly larvae – populates a different habitat in the pond. Crayfish, for example, is a collector at the bottom. So in general it is not a threat to swimming fish or frogs. However, if such an animal swims right in front of its claws, there is no guarantee that the crayfish will not pinch. But it can also be dangerous the other way around. Fish that are too big are a danger, especially for the young crustaceans, because they find something to eat in the small, not yet defenseless shellfish. Help for a regular coexistence of several pond inhabitants is definitely enough space and hiding places so that everyone can get out of the way; there is little that can be guaranteed.

One last point: Suddenly you are missing crayfish, although there are no other fish and neither the neighboring cat nor the heron was there? That can happen too! If the сrayfish is not comfortable in your pond, it may migrate. This is not an uncommon phenomenon because crustaceans – although they are gill breathers – can survive without water for a certain period of time. You can of course put a barrier around the pond to prevent it from migrating – but then you may not notice that something is wrong with the pond that is causing it to migrate, and the crabs could die. By the way, summerlings are best suited for Kresb beginners: These are between 3 and 6cm tall and are still too small to migrate. They also get used to given conditions better than older crabs. This gives you enough time to create the ideal pond conditions for these exciting shellfish.