He can’t be ignored: Laughing Hans is a bird that makes calls that are reminiscent of people laughing out loud. Hence it got its name.

The Laughing Hans belongs to the genus of the so-called Jägerlieste. These birds, in turn, belong to the kingfisher family and are the largest representatives of this family in Australia. They grow up to 48 centimeters and weigh about 360 grams. The body is squat, wings and tail are quite short.

They are brown-grey on the back and white on the belly and neck. There is a wide dark stripe on the side of the head below the eye. The head is very large in relation to the body. The strong beak is striking: it is eight to ten centimeters long. Externally, males and females can hardly be distinguished.

Where does Laughing Hans live?

Laughing Hans is only found in Australia. There he inhabits mainly the eastern and southern parts of the continent. The Laughing Hans is quite adaptable and can therefore be found in many different habitats. Most of the time, however, he lives near the water. The birds are real “followers of cultures”: They are staying closer and closer to people in gardens and parks. 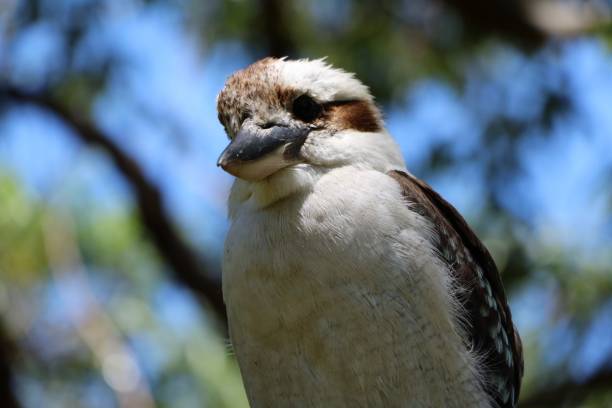 To which species is the Laughing Hans related?

There are four different species in the Jagerlieste genus, native to Australia, New Guinea, and Tasmania. In addition to the Laughing Hans, these are the Crested Liest or Blue-winged Kookaburra, the Aruliest, and the Red-bellied Liest. They all belong to the family of kingfishers and thus to the order of the raccoon.

How old will Laughing Hans be?

Laughing Hans can get quite old: the birds live up to 20 years.

How does Laughing Hans live?

The Laughing Hans is one of the most popular birds in Australia and even adorns a postage stamp. The natives of Australia, the Aborigines, call the laughing Hans Kookaburra. Legends about this striking bird have been shared for a long time. According to this, when the sun first rose, the god Bayame commanded the kookaburra to let his loud laughter be heard so that people would wake up and not miss the beautiful sunrise.

Aboriginal people also believe that insulting a kookaburra is bad luck for children: it is said that a tooth grows crooked out of their mouth. The birds are sociable: they always live in pairs and have a fixed territory. Once a male and a female have found each other, they stay together for life. Sometimes several couples get together to form small groups.

In the vicinity of human settlements, the animals can also become quite tame: they allow themselves to be fed and sometimes even come into the houses. The birds are unmistakable with their typical screeching: Especially at sunrise and sunset, they let out calls reminiscent of very loud laughter.

Because they call so regularly at the same time, they are also called “Bushman clocks” in Australia. The laughter begins quietly at first, then gets louder and louder and ends with a booming roar. The screeching is used by the birds to demarcate their territory and to announce to other conspecifics: This is our territory!

Friends and enemies of Laughing Hans

Thanks to its strong beak, Laughing Hans is quite defensive: if an enemy, such as a bird of prey or a reptile, approaches its nest with the young, for example, it will defend itself and its young with violent beak smacks.

How does Laughing Hans reproduce?

Laughing Hans usually builds his nest in the hollows of old rubber trees, but sometimes also in the old nests of tree termites.

The mating season is between September and December. A female lays two to four white-colored eggs. Males and females incubate alternately. If the female wants to be released, she rubs the tree with her beak and this noise attracts the male.

After 25 days of incubation, the young hatch. They are still naked and blind and completely dependent on their parents for care. After 30 days they are so developed that they leave the nest. However, they are fed by their parents for about 40 days. 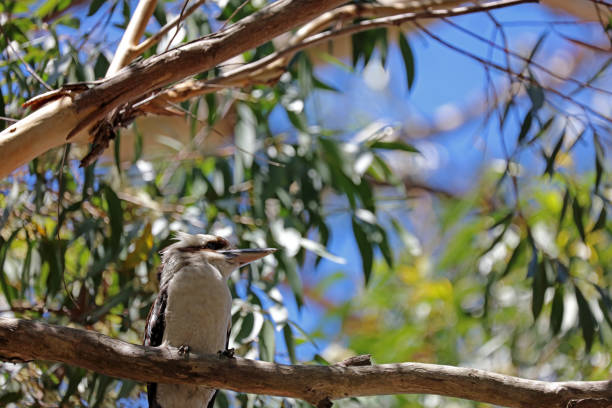 They often stay with their parents for up to two years or more and help them raise the next young. Her younger siblings fiercely defend her against enemies. The birds become sexually mature at around two years of age.

How does Laughing Hans communicate?

The typical sounds of Laughing Hans are calls similar to human laughter, which begin quietly and end with a loud boom.

What does Laughing Hans eat?

Laughing Hans feeds on insects, reptiles, and small mammals. He hunts them at the edges of forests, in forest clearings, but also in gardens and parks. He doesn’t even stop at poisonous snakes.