Ibexes are real climbing artists: in the high mountain regions of the Alps they live in steep, inaccessible terrain and can also get by with meager food.

Capricorns belong to the goat family and also resemble them a bit. They are about the same size, measuring 1 to 1.5 meters from head to bottom and 70 centimeters to 1 meter high. The females – they are also called rock goats – weigh about 50 kilograms, the males 80 to 125 kilograms. Capricorn males also wear short goatee like goats.

While the females only have short horns, around 20 centimeters long, the males are up to one meter long, weigh up to 15 kilograms and curve slightly backward. The horns have thick ridges on the front. In cross-section, the horns of females are round, those of males are triangular. The tail of the animals is quite short, measuring only 15 centimeters. The hind legs of the animals are longer than the front legs, which allows them to walk safely on steep slopes.

Alpine ibexes are adapted to live in the cold and rough high mountains: their fur is therefore very dense. In summer, females and juveniles are grey-brown, males chestnut-brown, in winter the fur of all animals is gray to dark grey. The belly is lighter colored, sometimes even almost white.

Where does Capricorn live?

There are ibexes in the high mountains of Central Europe across Siberia to Central Asia and North Africa. Alpine ibexes are animals of the high mountains: They live above the tree line at 2500 to 3500 meters and love rocky and scree regions where only a little undergrowth grows. They are only very rarely in the forest – usually only in April or May. Then they won’t find anything to eat further up, while further down there are already the first fresh blades of grass and juicy buds. 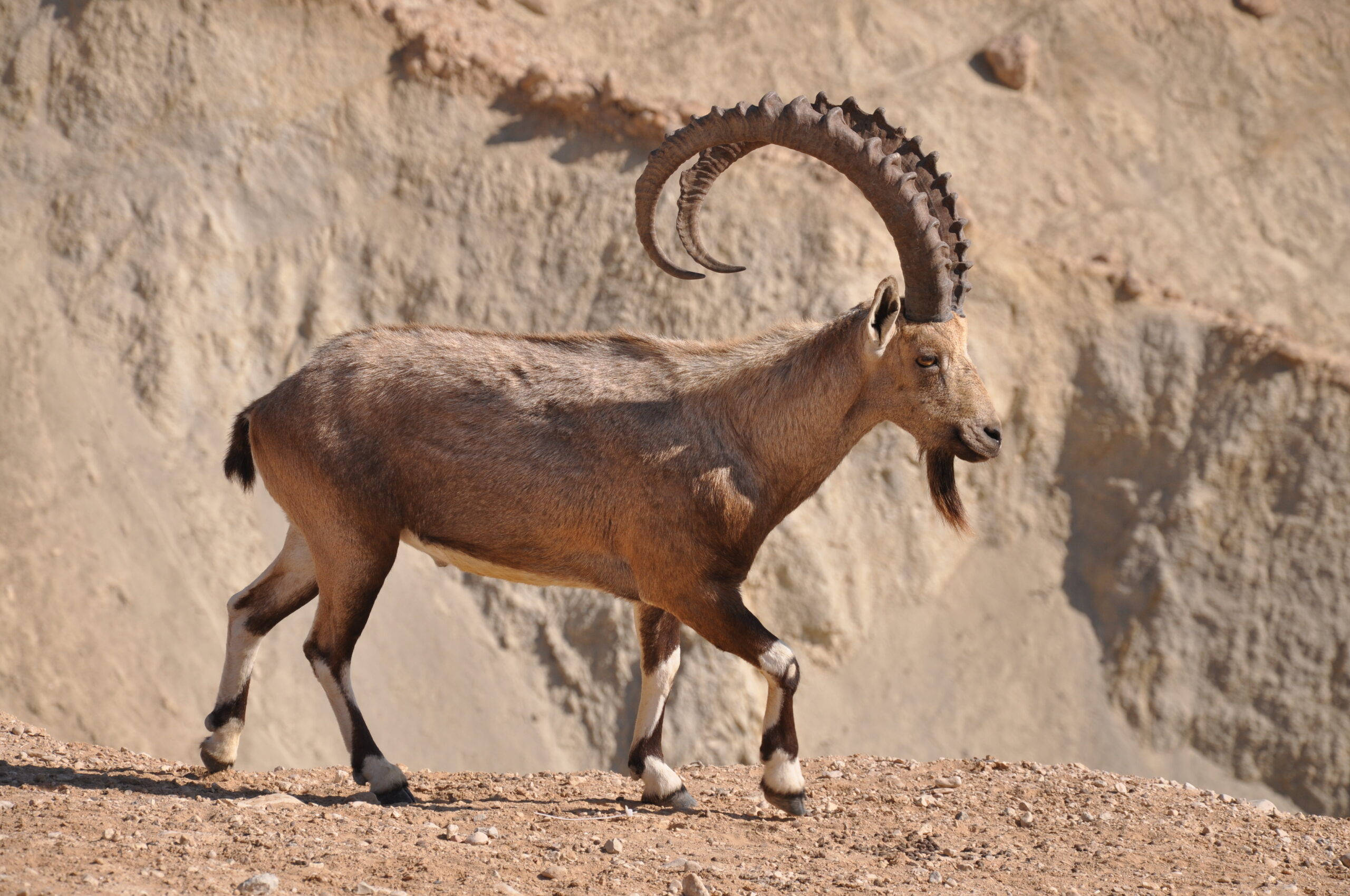 During the summer they move higher and higher into the mountains. In winter they descend deeper again to sunny southern and southwestern slopes.

What types of ibex are there?

How old do Capricorns get?

Capricorns live to be about 15 years old, but sometimes up to 20 years. The age of the males can be easily read from the so-called growth rings on the horns.

How do ibexes live?

Capricorns are diurnal animals. They feed primarily in the early morning and evening. During the day they usually rest and chew their food. For this, they look for shady places and overhangs on rock faces, as they do not tolerate heat well. On the other hand, they withstand the cold very well thanks to their thick fur. In summer, males and females live separately in groups of up to 30 animals. Some Capricorn males also move around alone.

During the mating season in winter, the males join the females. When males fight over a female, fierce fighting ensues: Both get up on their hind legs, fall forward and crash their horns into each other with a loud crack. Capricorns are very agile climbers and can also jump skillfully and safely from rock to rock.

Wolves, bears, and lynxes can be dangerous to ibex, but since we hardly have them anymore, adult ibex have no natural enemies here. Young or sick animals can fall victim to vultures, eagles, or ravens. However, the biggest enemy of the ibex is man: ibex were hunted almost to the point of extinction here. Their horns were coveted hunting trophies, and the ground horns and blood of the animals were used to cure many diseases.

How do ibex breed?

The mating season for ibexes is in December and January. After about five and a half months, the young are born in May or June. Usually, only one Capricorn baby is born, only very rarely are there two. They can walk from an early age, and by the age of four weeks, they are practicing climbing and jumping in small groups. Young ibexes are suckled by their mother for six months, after which they are independent. 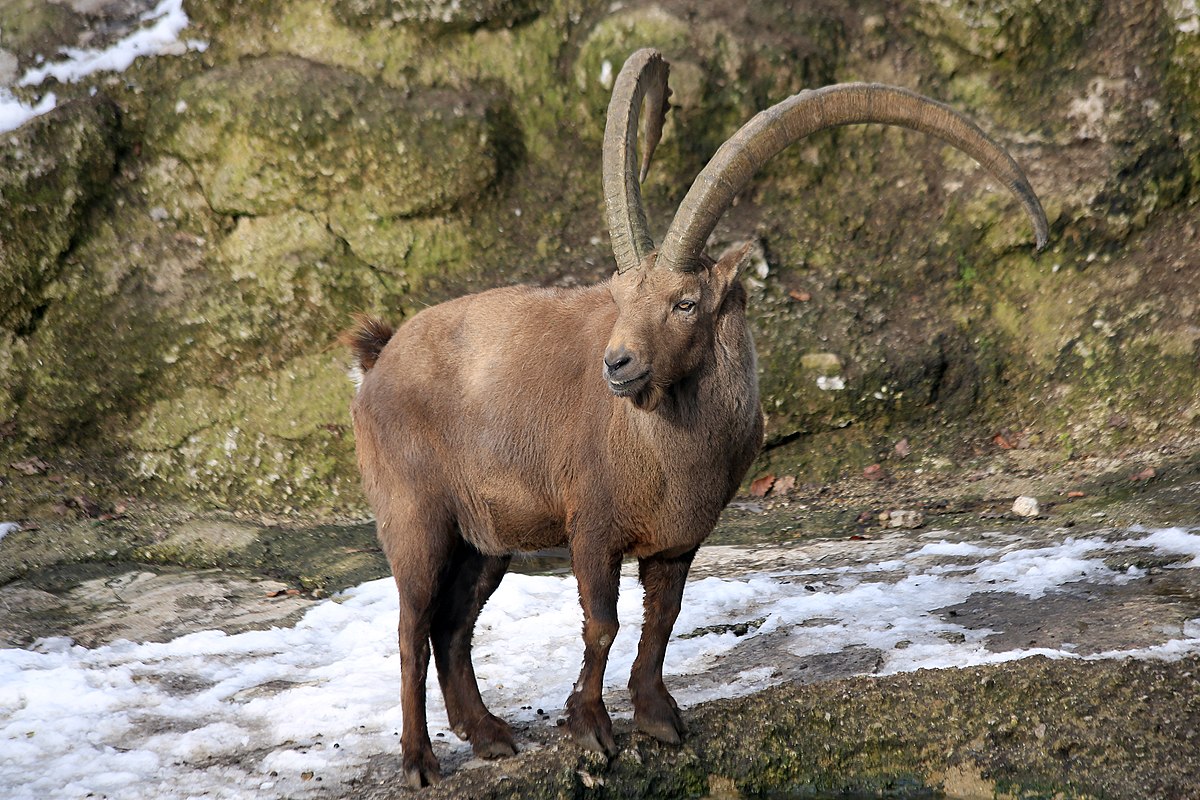 How do Capricorns communicate?

Capricorns, like goats, can bleat. They also warn of danger with whistles. When they’re scared, they bleat.

What does an ibex eat?

Capricorns are pure vegetarians and have to make do with the meager food in the high mountains. They eat grasses, herbs, lichens, and the shoots and buds of young shrubs and trees. In winter they are content with cushion plants and dry grass, which they scrape out from under the snow. Capricorns are ruminants. This means that they vomit their food out of their stomachs and chew it again several times. In this way, they gain enough energy from very sparse food.