The inconspicuous amphibian is an unusual animal. What makes it special is that it spends its entire life as a kind of larva. So he never fully grows up, but can reproduce

The olm belongs to the class of amphibians and there to the order of the caudal amphibians. The olm resembles a large worm or a small eel. It grows 25 to 30 centimeters long. The head is narrow and spatulate in front, the eyes are hidden under the skin and can hardly be seen. The grotto olm can no longer see with them, it is blind.

The front and hind legs are also hardly recognizable, they are tiny and thin and each has only three fingers or toes. The tail is flattened at the sides and has thin fin-like seams.

Because olms live in dark caves, their bodies are almost colorless. The skin is yellowish-white and you can see the blood vessels and some internal organs through it. When an olm is exposed to light, dark spots appear on the skin. This proves that olms are not albinos, they simply do not develop body pigmentation. They don’t need these pigments because they live in dark caves.

The olm breathes with its lungs. However, it also has three pairs of red gill tufts on the back of its head. All amphibian larvae have such tufts of gills, including frog tadpoles, for example. In the case of the olm, however, the old animals also have gill tufts. The phenomenon that reproductive animals also have characteristics of larvae is called neotony.

Where do grotto olms live?

The olm occurs only in the limestone mountains east of the Adriatic Sea from the extreme northeast of Italy via Slovenia and western Croatia to Herzegovina. Because grotto olms are considered a sensation, some animals were released in the 20th century in Germany – in the Hermannshöhle in the Harz Mountains – in France and in various regions of Italy.

The olm lives exclusively in the flooded parts or in springs in dark, damp caves. The water must be clean and oxygenated. The water temperature must be eight to 17 degrees Celsius. The animals can also tolerate colder temperatures for a short time. If the water is warmer than 18 degrees Celsius, the eggs and larvae can no longer develop.

What types of grottos are there?

The olm is the only species of the genus Proteus. Its closest relatives are the North American ridged newts. Together with them, the grotto olm forms the olme family. The only above-ground form of the cave olm was found in Slovenia. The animals are black in color and have developed eyes. The researchers are not yet sure whether these animals are a subspecies.

How old do grotto olms get?

After observing abandoned animals, it is assumed that cave olms can live up to 70 years. Some researchers think that they even live for over 100 years.

How do grotto olms live?

The olm was only discovered in the 17th century. Because they had no idea what kind of strange animal they were at first, they were even called “dragon babies”. It is very rare for a species to never reach the adult stage. In addition to the Grottenholm, this phenomenon occurs in some lungless salamanders, such as the Texan fountain newt.

Olms can breathe with their lungs as well as with their gills. When kept in terrariums, they sometimes even crawl onto land for short periods. Because the olms live in dark caves, they are active all year round and at all times of the day. They have a magnetic sense – the so-called lateral line organ. They can use it to orientate themselves in their habitat. They also have very good hearing and a good sense of smell. If light enters the cave, they can perceive this via sensory cells in the skin.

The most unusual thing about the olm is that it can grow very old without showing any signs of aging on its body. This means that the animals hardly change externally over decades. The researchers do not yet know why this is the case. However, they are working to find out how the aging process in vertebrates and also in humans could be delayed.

Friends and foes of cave olms 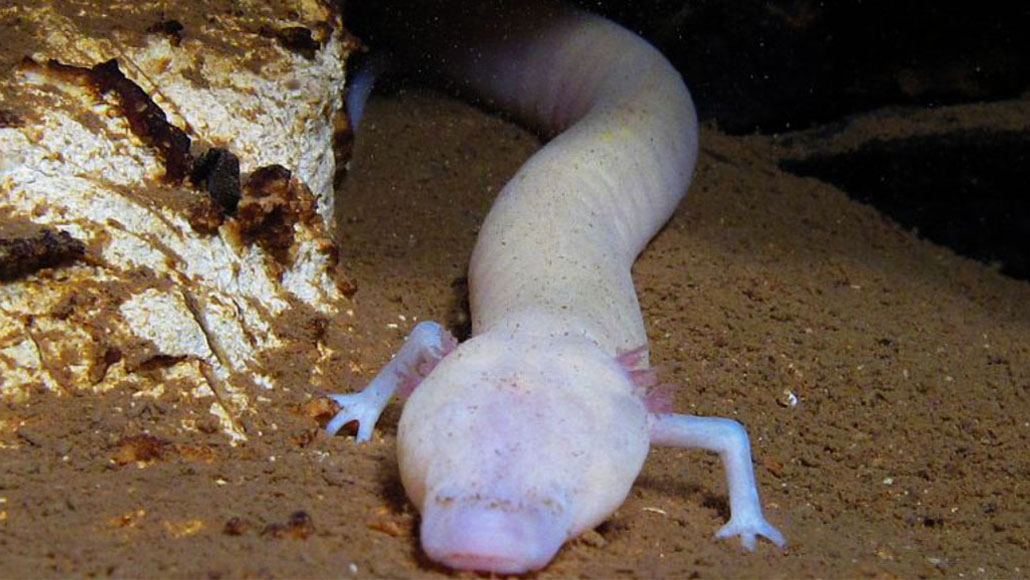 Little is known about the natural enemies of the olm. These are believed to include crayfish and a parasite found only in the bodies of cave olms.

How do grotto olms reproduce?

The thickened region around the cloaca shows that an olm is capable of reproduction. The swelling is thicker in males, less pronounced in females and the eggs can sometimes be seen through the skin. Because the animals live in caves, it has so far hardly been possible to observe the development of the animals in nature. Nor have eggs of some have ever been found in caves. Young larvae have also only rarely been discovered.

The males have small territories during courtship, which they defend against competitors in fierce fights. The animals bite each other, sometimes even losing gill tufts in these fights. If a female enters the territory, she is circled with wagging movements of the tail. Then the male deposits a packet of seeds, a so-called spermatophore, on the bottom of the water. The female swims over it and picks up the seed packet with her cloaca.

The female then swims to a hiding place. They defend the area around their hiding place, the spawning ground, against intruders with bites. After two to three days, the female begins to lay eggs and lays about 35 eggs that are four millimeters in size. Once the young have hatched, the female continues to defend the spawning ground and thus protects her young. Unguarded eggs and juveniles are usually eaten by other olms.

The development of the larvae takes about 180 days. When they reach a size of 31 millimeters, they become active. In contrast to the “adult” animals i