Young frogs do not resemble their parents. Only in a complicated transformation process, the so-called metamorphosis, do they take on the shape of a frog.

Even though there are around 2,600 different species of frogs in the world, frogs can be recognized at first glance: they all have a rounded, squat body, long, strong hind legs, and short front legs. They usually sit in the typical squatting position at the edge of a pond or on the leaf of an aquatic plant.

Her wide frogmouth is toothless; they catch their prey with their long tongues. Their front feet have four toes and their hind feet have five toes. Frogs, which live in water most of the time, also have webbed toes. Our native frogs are mostly green or brownish in color. One of the most beautiful native frogs is the tree frog, which is just two inches tall: it is bright green and has a black stripe on each side.

But there are also colorful frogs in the tropics: They can be red, turquoise blue, or bright yellow and are often patterned with dots or stripes.

Where do frogs live? 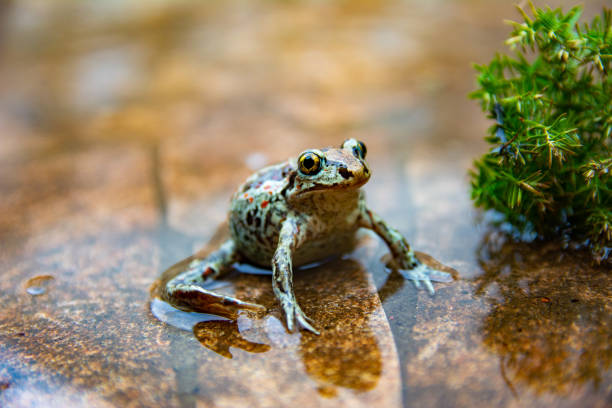 There are frogs on every continent in the world, from the equator to the far north – and from the coast to the high mountains. Frogs can be found in almost all habitats: in still lakes, raging mountain streams, in trees, underground, in the rain forest, in the prairies, and also in the mountains.

The development of the young frogs, i.e. the tadpoles, mostly takes place in the water. Frogs live almost exclusively in freshwater. Only very few also go into slightly salty water to lay their eggs.

What types of frogs are there?

There are around 2600 different species of frogs in the world. The most well-known is the tree frog, the common frog, the moor frog, the pond frog, and the water frog.

How old do frogs get?

Depending on the species, frogs can live anywhere from three to 20 years. Our native grass frogs, for example, live three to twelve years, tree frogs up to 25 years.

How do frogs live?

Frogs are amphibians, which means they live on land and in water. They are cold-blooded: their body temperature depends on the temperature of their surroundings. When it’s cold, they become slow and sluggish; when it’s warm, they’re lively. They usually only really wake up at dusk and at night. During the day they rest or sunbathe on the shore or in shallow water. If danger threatens, they disappear at lightning speed into deeper water.

But not all frogs live in water. The one we know best, the tree frog, is a real climber: it skilfully twirls around in bushes and on trees. Its fingers and toes consist of disc-shaped adhesive pads with which it can cling to branches and leaves like suction cups. It only lives in the water during the breeding season between April and June; then he climbs back into the trees. In autumn, our native frogs migrate to their winter quarters:

They sleep through the cold season underground and under dense heaps of leaves – or they hibernate on the bottom of the water.

Friends and foes of the frog

Some birds and snakes eat frogs. However, most animals do not eat frogs, because some species release a secretion through their skin that burns and tastes disgusting. Some tropical frogs are even very poisonous. The offspring of frogs, on the other hand, are very endangered: tadpoles are eaten by fish, ducks, newts, grass snakes, and large insect larvae. In order for at least a few tadpoles to survive and grow up, female frogs lay many thousands of eggs.

How do frogs reproduce? 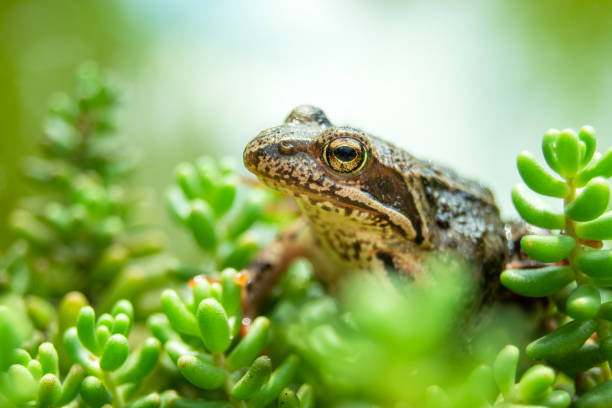 After mating, the female lays the eggs – also called spawn – in the water: The eggs are laid in either long spawning strings or spawning clumps and are attached to aquatic plants by the sticky, protective gelatinous layer. One to three weeks later, however, it is not a frog that hatches from the egg, but a tiny larva that attaches itself firmly to water plants.

Within a few days, the mouth, eyes, and tail develop: the tadpole is born. It can swim freely in water, has an oval body, a tail, and feather-like appendages on its head: these are the gills it uses to absorb oxygen from the water. Tadpoles feed on algae and the remains of plants and animals.

When the tadpoles are more than an inch tall, their gills and tail become progressively smaller. When they are about five weeks old, they are three centimeters tall. Suddenly, tiny hind legs can be seen, which are getting bigger by the day. After about seven weeks, the tadpole has also grown small front legs.

After almost eight weeks, the tail forms back and the tadpole’s chubby shape takes on the shape of a tiny frog. In addition, the little frog has to switch from gill to lung breathing. Once the legs are fully grown and the tail is gone, the gills regress. The tadpole, which is over three centimeters long, has grown into a little frog that is only one centimeter tall, and it quickly swims to the surface of the water to take its first breath and go ashore.

How do frogs hunt?

Well camouflaged, the frogs sit in the water and on the bank and lie in wait for prey. They only perceive animals that are moving. If an insect or worm wriggles in front of their mouth, they fold out their long tongue and snap: the prey gets caught on the sticky tongue and is swallowed.