Fire salamanders are amphibians – they live on land but are born in water.

Where do fire salamanders live?

Fire salamanders are found in large parts of central and southern Europe. But they also live in Algeria and other countries in North Africa, in Israel, in Asia Minor, and in Iran. Fire salamanders live on land, on the floor of deciduous and mixed forests. There they look for damp, cool places. During the day, the nocturnal animals hide under tree trunks, in burrows, under stones, or in the layer of leaves on the ground.

Fire salamanders only need bodies of water to reproduce – such as slow-flowing streams or ponds with cool, clean, oxygen-rich water. There, the females give birth to the larvae that have grown inside the eggs in the womb. The larvae then continue to develop in the water.

What species of fire salamander are there? 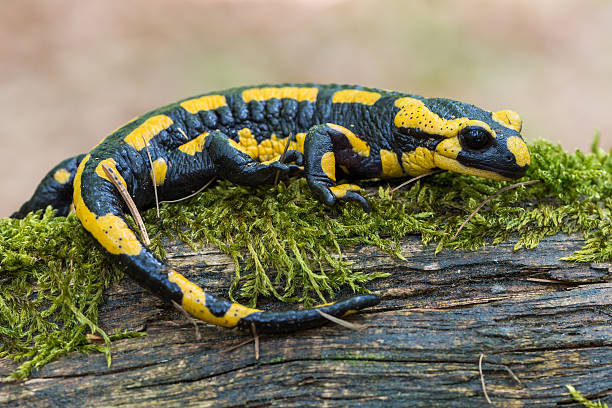 How old do fire salamanders get?

Fire salamanders can get quite old. Most of them reach the age of 15 to 25 years. But there have also been fire salamanders that have lived for over 40 years.

How do fire salamanders live?

Friends and foes of the fire salamander

Because adult fire salamanders can spray venom, they have virtually no natural enemies.

How do fire salamanders reproduce?

Fire salamanders mate on land. After mating, the fertilized eggs remain in the womb for up to ten months. The relatively well-developed larvae (up to 70!) are then deposited in a clean, cool stream. The larvae are born in March or April. They have four legs but otherwise, look like tadpoles. The brown-colored fire salamander larvae breathe with external gills that are clearly visible on the head. 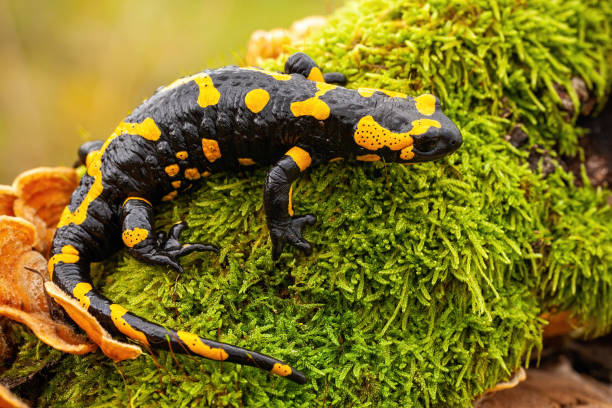 They paddle through the water and eat insect larvae. If they find enough food and the weather is not too cold, after three months the so-called metamorphosis takes place: This means that the larva that lives in the water becomes a fire salamander that lives on land. To do this, the gills must also convert into lungs. Fire salamanders become sexually mature at the age of four.

What do fire salamanders eat?

Fire salamanders mainly eat insects such as spiders, centipedes, or isopods. They also like worms and snails. Salamander larvae primarily feed on insect larvae that swim in the water.

The keeping of salamanders is not forbidden in Germany. But under no circumstances should you catch the animals in the wild, you can only buy them from breeders, from whom you can also get the necessary papers about the origin of the animals. You also have to register the salamanders with the responsible authority.

The terrarium for salamanders must not be too warm. A basement room where it is protected from the sun is best because salamanders like it damp and cool.