They don’t bear their name for anything: Coatis have a nose that is elongated like a small trunk and is very flexible.

The coati is a small predator that belongs to the coati family and the coati genus. Its body is somewhat elongated, the legs are relatively short and strong. Its long tail, ringed in black and very bushy, is striking. The fur of the coati can be colored in different ways: the palette ranges from reddish-brown and cinnamon brown to grey, and it is almost white on the belly. The ears are short and rounded.

Where do coatis live? 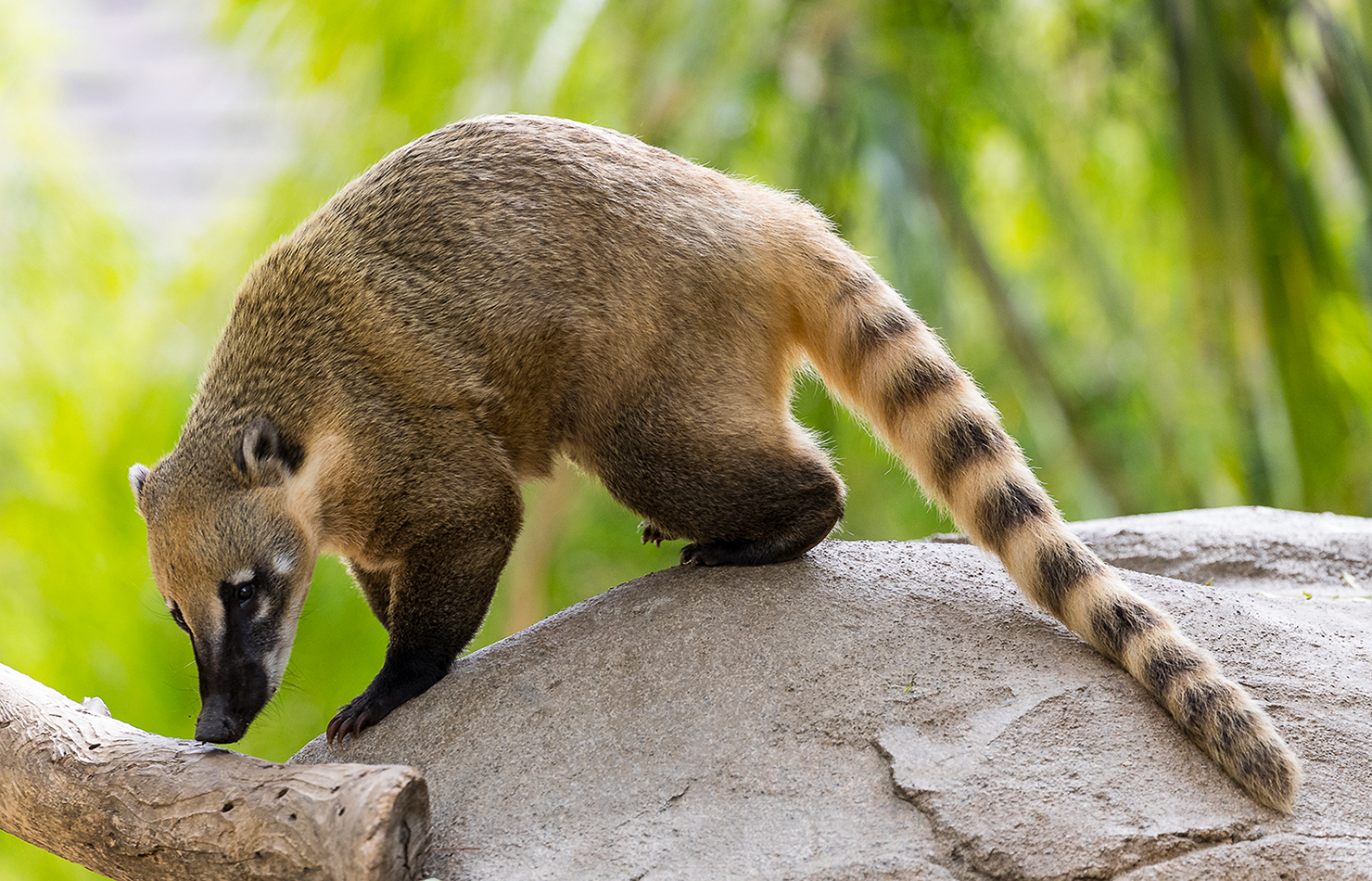 Coatis are only found in South America – where they are distributed almost over the entire continent and are called Coati – a name that comes from an Indian language. They are found from Colombia and Venezuela north to Uruguay and northern Argentina.

Coatis are predominantly forest dwellers: They are at home in tropical rain forests, in river forests, but also in mountain forests up to an altitude of 2500 meters. Sometimes they are also found in grassy steppes and even on the edge of desert areas.

What species of coatis are there?

There are four different coati species with several subspecies: In addition to the South American coati, are the white-nosed coati, the small coati, and Nelson’s coati. It is also considered a subspecies of the white-nosed coati. This one occurs in the furthest north: it also lives in the southwestern United States and in Panama. Coatis are closely related to North American raccoons.

How old do coatis get?

In the wild, coatis live 14 to 15 years. The longest known age for an animal in captivity was 17 years.

How do coatis live?

Unlike most other small bears, coatis are active during the day. They mostly stay on the ground to forage. They use their long nose as a tool: they can use it to smell very well and it is so agile that they can also use it to dig and dig in the ground for food. When they rest and sleep, they climb trees. Their tail is a great help on these climbing tours: the coatis use it to keep their balance when they are climbing along the branches.

Coatis are also excellent swimmers. Coatis are very sociable: several females live with their young in groups of four to 25 animals. The males, on the other hand, are loners and usually wander alone through the forest. They inhabit their own territories, which they vehemently defend against male conspecifics.

At first, they threaten by pulling up their noses and showing their teeth. If the competitor doesn’t back down, they bite too.

Friends and foes of the coati

Birds of prey, giant snakes, and larger predators such as jaguars, jaguarundis, and pumas prey on coatis. Because coatis sometimes steal chickens from coops or empty pantries, humans also hunt them. However, they are still very widespread and not endangered.

How do coatis reproduce? 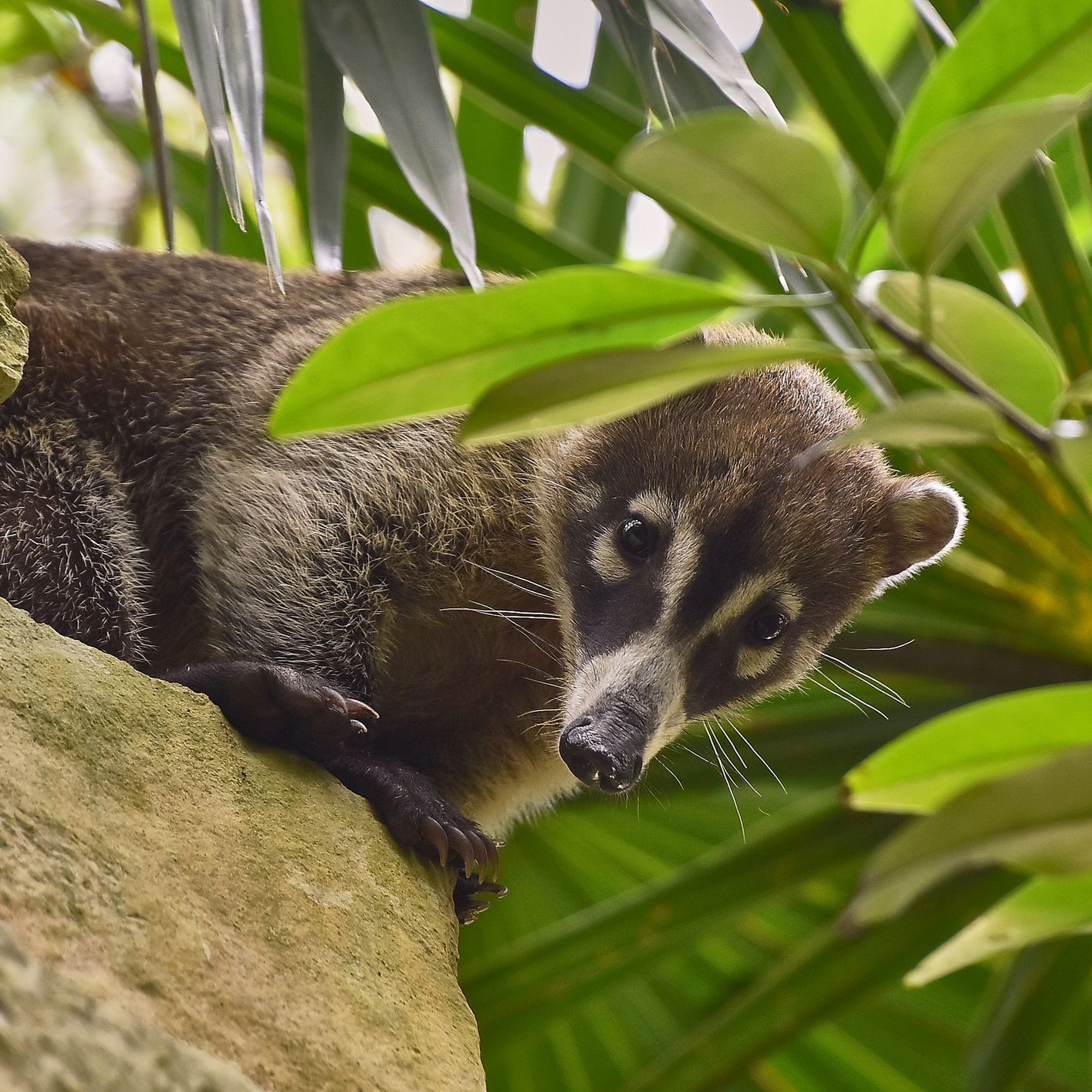 Only during the mating season do the groups of females allow a male to approach them. But it has to earn its place in the group first: It will only be accepted in the group if it grooms the females and subordinates itself. It relentlessly drives away male competitors. Finally, it is allowed to mate with all females. After that, however, the male is expelled from the group again.

Each female builds a nest of leaves high up in the trees to give birth. There it retires and gives birth to three to seven young after a gestation period of 74 to 77 days. The young weigh about 100 grams and are initially blind and deaf: only on the fourth day can they hear, and on the eleventh day their eyes open.

After five to seven weeks, the females rejoin the group together with their young. The little ones are suckled by their mother for four months, after which they eat solid food. When foraging, the females squeak to keep the young with them. Coatis are mature at about 15 months, males become sexually mature at around two years, females at three years.

How do coatis communicate?