The boa is also called an idol snake or god snake because it was worshiped in religious cults by the Indians and the African slaves who were deported to South America.

The boa is one of the giant snakes. It grows three to four meters long and weighs up to 60 kilograms. Individual animals can even be five and a half meters long – stretched out they are longer than many a room!

Their body is light brown with a reddish to dark brown spotting pattern that can vary quite a bit. The patterns are often diamond-shaped, have a light border and a light spot in the middle. The head has dark stripes on the sides and the tail is rust-colored. Boas molt every six to eight weeks. Like all other snakes, the boas have no lids but are protected by transparent skin. The eyes are less mobile than in mammals, so their gaze is always a bit piercing and fixed. During the day the pupils are contracted into a narrow, vertical slit, at night they become large and round like a cat’s.

Where do boas live? 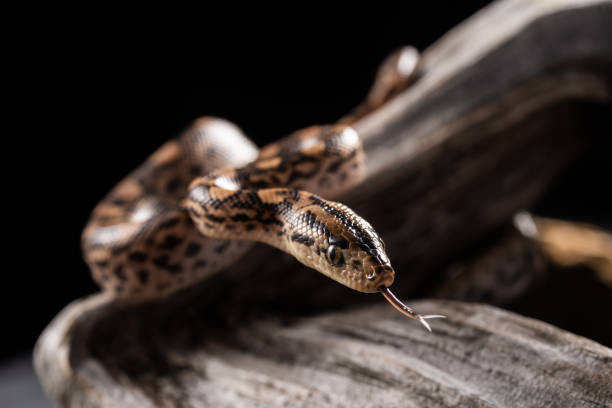 The boa is found in Central and South America from Mexico to northern Argentina. Boas can be found in forests as well as in savannas and semi-deserts. They live on the ground, but also like to climb trees and shrubs.

What types of boa are there?

There are eleven subspecies of the boa constrictor. They each live in different regions and can be distinguished from each other by color and pattern.

How old do boas get?

Nobody knows exactly how old boas can get in nature. However, it is estimated that they live up to 40 or 50 years. More is known about snakes kept in zoos: The oldest boa kept in a zoo was 28 years old.

How do boas live?

Boa snakes essentially consist of a long, super-strong muscular tube. And that’s also their weapon: They don’t have fangs, but bite into their prey with their backward-pointing teeth, quickly wrap themselves around them two or three times – and strangle them. They then swallow the prey in one piece. This is possible because they can unhook their upper and lower jaws from the joint that connects them and then open their mouths very wide.

However, a giant snake can only stretch as far as its stomach: Here the prey must first be digested before it can be transported through the snake’s rear end into the intestine. Once they have swallowed their prey, boas often go weeks without eating. You digest it and then you can starve for months without losing a lot of weight. During the day, boas retreat to hiding places, such as old rodent burrows, to sleep.

In the evening they wake up and start looking for food. Boa constrictors can move quite quickly: They squirm or stretch the front of their body forward and drag the rest of the body behind – like a caterpillar. However, they cannot catch up with a running human. Things are different in the water: Here they are very fast; they are excellent swimmers and divers.

Boas are hardly dangerous for humans. In South America, smaller specimens are sometimes even kept on farms because they eat rats and mice.

Friends and foes of the boa

Boas, like many other boa constrictors, are often hunted by humans. There is a simple reason for this: their skin has always been in great demand to make bags or shoes.

How do boas reproduce? 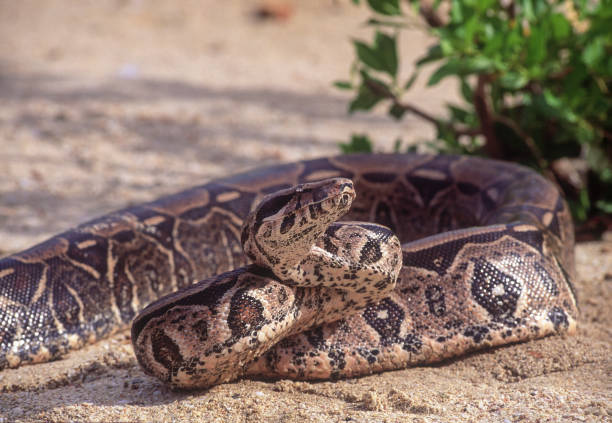 By the age of three, boas are adults and able to breed. Mating lasts many hours. Males and females are intertwined in a tangled knot. Boas do not lay eggs but give birth to live young. This means that the little boas develop in an egg in the mother’s body. The eggs, therefore, do not have a solid shell, just a soft shell. About five to seven months after mating, 20 to 40 little boas are born. They weigh 70 to 85 grams and immediately crawl into a hiding place.

How do Boaz hunt?

Boas can’t see very well, but they have a very good sense of smell to compensate. But instead of using a nose, snakes gather olfactory information from the air with their forked tongue. That’s why snakes are licking their tongues all the time. This olfactory information is then evaluated in a very special organ: it is called Jacobson’s organ and is located in the palate of every snake. With this special sense of smell, which works through the tongue and palate, snakes are not only able to recognize their prey but also other snakes.

How do boas communicate?

Like all other snakes, boas are mute and deaf. They can only emit a low hissing sound.