The name “axolotl” comes from the Aztec language and means something like “water monster”.

Contents show
1 Characteristics
1.1 What does an axolotl look like?
1.2 Where do axolotls live?
1.3 What species are axolotls related to?
1.4 How old do axolotls get?
2 Behave
2.1 How does the axolotl live?
2.2 Friends and foes of the axolotl
2.3 How do axolotls reproduce?
3 Care
3.1 What Do Axolotls Eat?
3.2 Keeping the Axolotl
3.3 Care plan for axolotl

At first glance, you really don’t know where to classify the axolotl: it looks a bit like a newt, a bit like an oversized tadpole. The axolotl has a body like a newt or a salamander, a flattened tail, a largemouth, and is about 20 to 25 centimeters long.

Gill appendages sit on the right and left of the neck, which looks like small trees. In nature, it is brown to gray in color and has dark spots. But there are also bred animals that are completely white and in which the gills stand out from the body in a red glow.

The axolotl has a special reason for its strange appearance: It remains in the larval stage, i.e. at the developmental stage of a tadpole, throughout its life. Axolotls belong to the amphibians and there to the cross-toothed newts. Males grow larger than females and also have a thicker heads and tails.

Where do axolotls live? 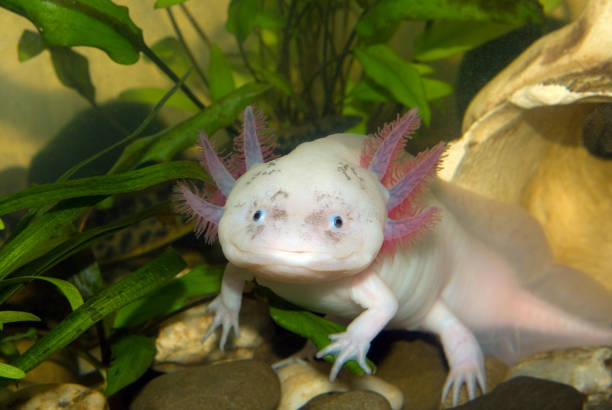 Axolotls are found only in Lake Xochimilco and a few other small lakes west of Mexico City in Central America. Unlike other amphibians, which live both aquatic and terrestrial, axolotls spend their entire lives in freshwater.

What species are axolotls related to?

How old do axolotls get?

Axolotls usually live 10 to 15 years, in extreme cases up to 25 years.

How does the axolotl live?

The axolotl is an animal that never grows up: in its development, it remains at the stage of a permanent larva. Unlike other amphibians, it does not go through a metamorphosis, i.e. a transformation from larva to adult animal. This phenomenon is called neoteny. This is because your thyroid is not making enough of the hormones needed for conversion. In theory, however, the axolotl could evolve:

If you add hormones from other newt species to the water or if you increase the iodine content of the water, the axolotl develops into an animal that no longer has gills and lives on land. However, this occurs very rarely in nature. For example, when the water temperature rises sharply, indicating that the body of water may soon dry up. Then the adult axolotl can migrate over land and look for a new body of water. However, these adult forms of the axolotl do not live as long as the larval form.

The first animals were brought to Europe in 1863. They soon became interesting for science because they have a very unusual ability: If they lose a body part, for example, because it is bitten off by an enemy, they can completely regenerate it within a few months and without scars. However, in lizards that can do this too, scars always remain visible and the newly formed body part is no longer as large as the old one.

Axolotls can even replace entire organs such as the heart or even parts of the brain if they are injured. Researchers are now trying to figure out how this works so they might one day be able to help people who have lost body parts or need new organs. In the wild, axolotls are mostly active at dusk, sometimes during the day.

Friends and foes of the axolotl

All predatory animals in the water, such as predatory fish, can become dangerous to the axolotl.

How do axolotls reproduce? 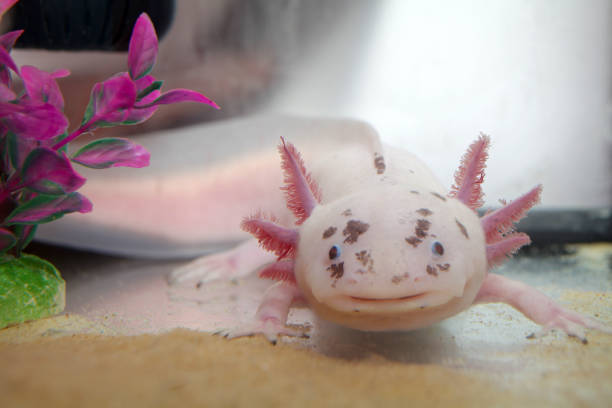 Although axolotls remain in the larval stage in their development, they become sexually mature at one to two years of age. The mating season is usually in spring. The male then waves scents to the female. If this is ready to mate, it follows the male. This drops a packet of seeds into the water.

The female ingests the semen and this is how the eggs are fertilized in her body. The female then looks for a place suitable for laying eggs and lays 300 to 1100 eggs there. The first larvae can be seen in the eggs after just seven days.

After about ten days they are already moving in the eggs. The young axolotls hatch 14 to 21 days after the eggs are laid. They are only seven millimeters long. The front legs develop first, followed by the hind legs about two weeks later. After about 20 months they are fully grown.

What Do Axolotls Eat?

Axolotls will eat any small invertebrate that swims around in the water. In the aquarium, they are fed with frozen food or food tablets.

Axolotls are fairly easy to keep in an aquarium. Unlike other amphibians, they don’t need a land part because they only live in the water. However, the normal room temperature is too warm for them: Because they feel most comfortable at 17-18 °C, the water usually has to be cooled.

Otherwise, it can happen that the animals get sick. From time to time the water should even be cooled down to 10 °C. Axolotls that are kept in aquariums are now exclusively bred because they are strictly protected in nature.

Today there are many cultivated forms and color variants on the market. An 80 x 40 x 40-centimeter tank is sufficient for three to four axolotls. The bottom of the aquarium is strewn with round gravel or sand, and it is equipped with roots and stones, and plants so that the animals have places to hide.

Of course, axolotls need to be fed regularly. In summer, however, they sometimes take a break from feeding, which can last about four weeks. The water in the aquarium must be changed regularly.