“Which fish do I put in my pond?” Every pond owner asks himself this question at some point. Most fall back on species such as goldfish, etc. But there is another way: The trend is towards the exotic. Find out here which aquarium fish can live in the pond and what to look out for.

Aquarium fish in the pond

If you have decided to let aquarium fish live in the pond, there are a few things to consider. First of all, you should decide whether you want to leave the animals outside only in the summer or all year round. If you decide to just give the fish a summer break, you have to choose animals that you can also find again in autumn. You will probably not find bottom-dwelling fish such as catfish in a normally planted pond. By the way, a general tip for catching in autumn is to feed the fish with flake food from September to make them more trusting.
You also have to make sure that the pond is halfway suitable for the needs of the fish. A species of fish that prefers a lot of planting in the aquarium will not be happy in a bare “Koi-style” pond and fish that are pounding need a substrate to be able to live out this behavior. The amount of solar radiation should also be taken into account here.

The summer break for aquarium fish in the pond

Animals that only spend the summer and autumn outside and are then relocated back to the warm area can cope with the weather and temperature conditions in the warm season, but they would not survive winter with low temperatures, frost, ice, and snow. Since you spend more time in the house in winter, you have the fish back in the aquarium at this time, where you can watch and care for them as usual – staying in the pond is like moving to the summer residence.

It can often be observed that aquarium fish reproduce strongly in the pond. That is why one often finds a larger population in autumn than originally used. Fast-breeding fish include, for example, macropods, livebearers such as swordtails and guppies, or blue gouramis, also known as “spotted threadfish”. In addition, labyrinth and paradise fish, zebrafish, black mollys, and ruby ​​barbs are ideal for part-time pond management.

Fish species that can survive in the pond all year round are more robust in many areas than those that should only spend the summer outside. For example, the killifish, which is native to Turkey and is sometimes exposed to permafrost there, can cope well with low temperatures. Also certain macropod species from China and sunfish. For the benefit of the fish, however, you should cover the pond with Styrodur or special foils to make it easier to overwinter.

In addition to keeping animals in the pond, there is also the possibility of keeping animals in smaller containers. So shrimp can be kept in large buckets or rain barrels. A species often used for this is the Red Fire or Red Cherry Prawn. These shrimp are relatively insensitive and have no problem spending the summer and autumn outside. There are also reports of red fires that have overwintered, but each pond owner has to decide for himself whether one wants to expect this from their own animals. A good alternative here is the European wild shrimp (Atyaephyra desmarest), which can withstand temperatures just above freezing point even in the wild. Although this species is less colorful, it reproduces more reliably.

In general, you should start with a sufficiently high starting population to ensure long-term success. If you want to leave the shrimp on their own, it is advisable to keep a few animals in the house to be on the safe side. If the population in the garden cannot hold its own, there are at least enough animals “in the bag” to continue the indoor shrimp husbandry. Incidentally, you can help the animals by installing a heating rod outside in the basin or bucket. However, this is relatively expensive and – like everything else – must be decided according to your own conscience.

Now let’s turn to the advantages and disadvantages of keeping aquarium fish in the pond and start with the positive sides. First and foremost is probably that the fish find much more natural conditions in the pond, especially when it comes to the space available. The attitude in a 60l aquarium can hardly be compared with that in a 500l pond basin (and in principle 500l pond volume is not even “really” large). The fish can swim more, live together in larger, more natural schools and under certain circumstances even feed themselves. Another great advantage is that many fish clearly show their satisfaction with the “better circumstances”. Many species develop a splendor of color in the pond that you will never see in the aquarium. In addition, they are often much more vital and generally visibly enjoy their new life.

Of course, there are also disadvantages to keeping them outdoors. Many aquarists say that they hold the fish to watch them: That works much worse in the pond – some animals even submerge completely and were never seen again after they were set up. This is also related to the fact that many fish become shy due to the less intensive contact with the fish keeper because they are more on their own. This can be a problem, especially when catching in autumn. If you want to let the fish overwinter, this point does not apply, but despite many successful overwintering reports, there is no guarantee that your own fish will really survive the winter. There are also dangers and predators in the pond that do not exist in the aquarium: dragonfly larvae, water striders and yellow blight beetles are just a few examples.

Keyword falsification of the fauna 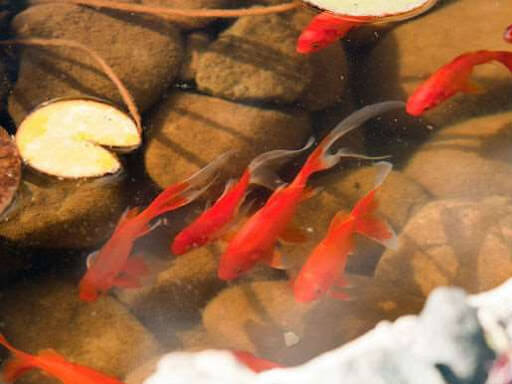 With the whole subject of keeping exotic animals “under the open sky”, one inevitably cannot avoid this point, and rightly so! If you want to keep aquarium fish in the pond that is not found in our natural flora and fauna, you have to make sure that the pond is “escape-proof”. That might sound strange because a fish can’t just break out, but there are other options. An example is a migrating water bird who accidentally takes a foam nest with fish spawn during a stopover in your pond. In this way, the exotics also get into other bodies of water, where they can grow up and pose a serious threat to native animals and plants because, among other things, they have no natural enemies with us.

In general, due to the topic of neozoa and neophytes (“foreign” animals and plants that settle elsewhere through human hands) many native animal species are threatened or even completely exterminated worldwide. So that you don’t unknowingly and willingly contribute to it, you should make sure that the exotic species or their offspring also stay in your pond. Also, note that it is of course taboo to simply abandon animals when they are overpopulated. This is even prohibited by law and subject to heavy fines.