The stocky, compact figure, his intrepid nature, and great enthusiasm for work make the Rottweiler one of the most important service dogs in Germany. Here’s everything you need to know about the popular dog breed.

Contents show
1 History of the Rottweiler
2 Traits and Character Traits
3 How Do I Keep a Rottweiler?
3.1 What do I need to pay attention to when purchasing?
3.2 Puppy development and education

History of the Rottweiler

The first evidence of the Rottweiler’s existence dates back to Roman times, which is why the breed is one of the oldest. The Romans kept the beefy dog ​​primarily as a herding and driving dog. The dogs were also active in war and were used for exhibition fights against dogs, other animals, and even gladiators.

The dogs of the Romans crossed the Alps with them and protected the people and the cattle on the arduous journey. In the area around the town of Rottweil, they met the native animals and mixed with them. In the Middle Ages, butchers in the region especially liked the strong and intelligent dogs. They needed a strong herding dog for their sheep and cattle and continued to breed the breed. For this reason, the dogs were popularly known as Rottweiler Metzgerhund.

The butchers also used the dog as a protector for their belongings. To prevent anyone from stealing money from them, the dog always carried the money in a leather pouch around its neck. Because of his courage and strength, he also took on bulls and could be harnessed to a cart. Due to its strength and good handling, the breed was officially recognized as a police dog in 1910. 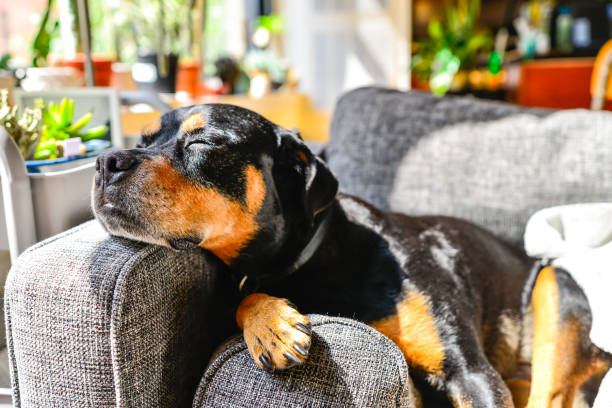 During the Second World War, the soldiers brutally exploited the Rottweiler’s obedience. The army fitted the dog with a mine on its back and sent it under enemy tankers, where it exploded. They lightly accepted the death of the animal. In Germany, the Rotti can still be found today as a protection or sniffer dog, mainly in the military or police. Some also keep him as a watchful family and farm dog.

Although the Rottweiler may appear intimidating and menacing on the outside, they are friendly and peaceful in nature. He gets along well with children and other dogs are no problem for him. If you get him used to it from an early age, the Rotti can also be kept together with cats. The temperamental, willing-to-work and affectionate dog builds a strong bond with its owner. Especially at a young age, he cannot assess his strength and reacts exuberantly happily when he sees his two-legged friend. A well-behaved Rotti is not nervous or aggressive and always remains calm and alert even in stressful situations.

The loyal dog has a strong protective instinct towards its “human pack”. In order to avoid incidents, you should educate your four-legged friend consistently but lovingly. In general, it is only suitable for experienced dog owners who can invest a lot of time in training. Due to its performance-oriented breed, the Rottweiler remains active into old age and has a relatively long life expectancy of eight to ten years. He is willing to learn and needs a meaningful task and a lot of activity.

How Do I Keep a Rottweiler? 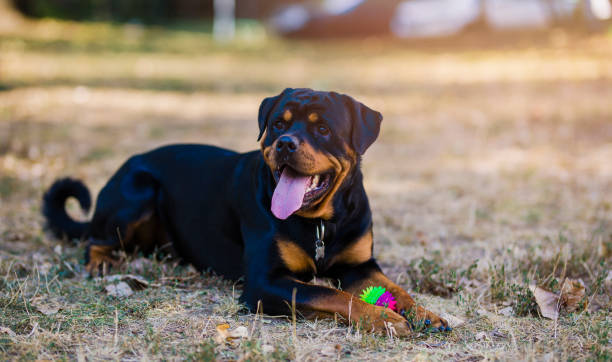 What do I need to pay attention to when purchasing?

A Rottweiler is not a beginner dog for strength alone. So if you want to get a Rotti, you should also be able to physically cope with the dog. The persistent working dog needs a reference person and a lot of activity from day one. It is best to keep the dog in a house with a large garden where it can run around a lot on its own. In addition, an adult Rottweiler needs at least two hours of exercise in the fresh air every day. You should therefore have the necessary fitness and time to do justice to a representative of this breed.

If you can meet all the criteria, it’s about finding a suitable Rotti for you. For a purebred Rottweiler from a qualified breeder, you need to budget at least $500. For individual puppies, however, up to 1200€ can also be incurred. There are some private breeders where you can buy undocumented dogs a lot cheaper.

You should be careful here, as the animals usually come from poor conditions or are sick. If you want to save money and have dog experience, go to an animal shelter. Here you will find well cared for animals that are looking for a new home. The most common are black-coated Rottweilers with reddish-brown markings on their head, chest, and legs. There are also some representatives with yellow, red, or brown fur.

Rottweilers need good socialization and close family ties from the moment they are puppies. As a small puppy, the Rottweiler is still very playful in the first months of life. Therefore, you should provide him with the right toy. It is best to go to a dog school together, where the dog can learn how to interact with other dogs. In addition, you should train a strong dog like the Rotti consistently from the start.

You have to make it clear to the dog that you are the “leader of the pack” and that he will submit to you independently. Although Rottweiler is known for his fearless nature, he is sensitive to punishment. I, therefore, recommend a loving upbringing without any physical sanctions, such as clicker training. If the Rotti gets too little exercise, it can very quickly develop unwanted behavior that will persist even with consistent training.