The Pekingese or Pekingese is one of the oldest companion dogs in the world. With its rustic appearance and easy-going, lovable nature, the dog is particularly popular with pensioners. In the profile, you get information about the origin, the character, and the attitude of the pedigree dogs.

History of the Pekingese

The Pekingese is an ancient breed of dog that originated in the Chinese Empire. Already 2000 years ago the small dogs served the imperial family as palace dogs. Centuries-old porcelain and jade figures already show representations of the Pekingese. Numerous small sculptures from the Qing Dynasty (1644-1912) in particular have survived. Like the Shih Tzu and the Lhasa Apso, the Chinese also called the Pekingese “Lion Dog”.

All of these dog breeds should resemble the Buddhist guardian lion. The rulers worshiped their dogs so much that it was considered unthinkable to give them away. For this reason, the Chinese were particularly hard hit when the hated Europeans captured five palace dogs during the Second Opium War. These dogs made their way to England where they formed the basis for European breeding.

As early as 1864, the first representatives of the breed could be seen at exhibitions. The British Kennel Club recognized the breed in 1898 and the first specimens reached Germany in 1900. To this day, it is mainly the English who breed the small palace dogs in Europe. Unfortunately, the breeding efforts with increasingly extreme breed characteristics have greatly affected the breed in recent decades. 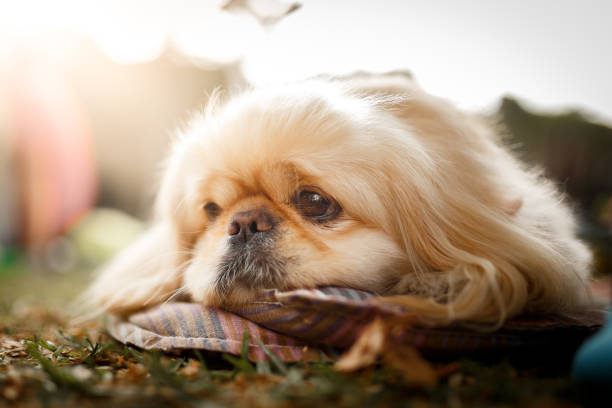 The dogs got bigger and bigger eyes, a flatter nose and more fur. In the meantime, however, the trend is back towards a healthy and more natural appearance of the dog. In the FCI classification, the Pekingese is assigned to Group 9 “Company and Companion Dogs” in Section 8 “Japanese Spaniels and Pekingese”.

Bred as a companion dog for centuries, the Pekingese is a particularly quiet dog. Nevertheless, representatives of the breed are alert and intelligent. They need a close bond with their owner and can make great friends. They tend to prefer to bond with individuals rather than with a whole family. They demand their human’s full attention and therefore react jealously if they are not the center of attention. The faithful dogs are aloof with strangers and need time to warm up to them. Despite their small size, the fearless dogs make good watchdogs, reporting strangers but not barking loudly.

The Appearance of the Pekingese

The Pekingese has a short body with a pronounced waist. The head is large and relatively broad with a short muzzle and round, dark eyes. The close-fitting ears are heart-shaped and covered with fur. The long feathered tail sits high and the dog carries it, typical of the breed, slightly bent to the side over the back. The front legs are short and the hind legs are strong and muscular. The breed is found in all colors except liver and albino. All color variants have a dark mask, i.e. black pigmentation on the nose, lips, and lid edges.

The smooth coat is moderately long and forms a mane around the neck that should not extend beyond the shoulders. The straight topcoat is interspersed with a dense undercoat. The hair should never be so long that the animal’s freedom of movement is restricted. Also, the body shape should not be veiled. Unfortunately, there are some show dogs with exaggerated breed characteristics that suffer greatly.

Education of the Puppy

You don’t have to be a professional to train the idiosyncratic palace dog, but you should be familiar with it. It is particularly important to know the characteristics of the breed and to act accordingly. If you give your Pekingese a loving and consistent upbringing, you will get a great companion dog. Make it clear to your dog that you are in charge and do not give him pointless praise. Even if he seems innocent and cute, the puppy can quickly pose as the “decision-maker”. Visiting a dog school is recommended, as the puppy can socialize with other dogs here. You will also receive the necessary support when training your four-legged friend.

Activities with the Pekingese

Like its ancestors, today’s Pekingese is a rather easy-going dog. He is content with short walks and does not need competitive sports. The small palace dogs are therefore not suitable for people who want to successfully do sports with their dogs. Because of their stocky build and short nose alone, the dogs shouldn’t exert themselves too much. Of course, the dogs still need enough exercise every day, otherwise, they tend to be overweight. But the most important thing for the little dogs is the company of their people and daily cuddles. 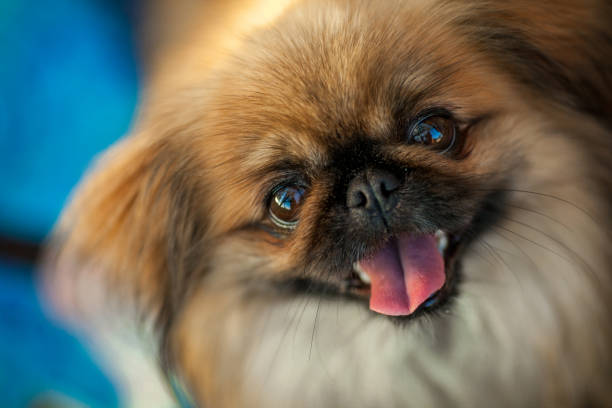 The Pekingese belongs to the so-called brachycephalic breeds. The short nose makes breathing difficult and the large, protruding eyes are sensitive. Excessively long fur also has a negative effect on the health of dogs. So before you buy, make sure you buy a dog with moderate breed characteristics. Since the small dog does not burn as much energy due to its relaxed nature, you should ensure a healthy diet. The most important thing when caring for a dog is daily grooming. You should not only comb and brush the coat every day during the change of coat but also outside of this time. It is also important to check the fur for dirt and bugs after each walk.

Is the Pekingese Right for Me?

Anyone looking for a small dog for a city apartment will find a great roommate in the Pekingese. It is ideal for single people who have a lot of time for themselves. It is also suitable for active pensioners or older people who can no longer walk too far. He prefers to be with his caregiver because he can’t stand too much hustle and bustle. Before you buy a puppy, you should deal with dog training and, above all, grooming. Some representatives of the breed are also suitable as family dogs with corresponding habituation.