Here we want to deal again intensively with the problem of “algae in the garden pond” and find out more about the three most common types of algae: floating, filamentous and blue algae. You can find out here why they are so dangerous and how to recognize them and get rid of them. 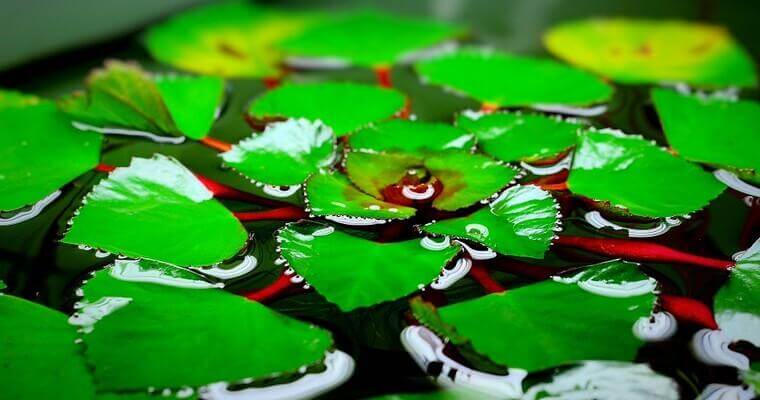 These floating algae are one of the types of algae that can be found in every pond. They float freely in the pond water. In general, they are even good for your pond, because they serve microorganisms such as water fleas as food and even produce oxygen through photosynthesis – although according to the biological system they do not belong to the plants, but form a class of their own. In general, algae only become a problem when they get out of hand.
The floating algae can be recognized by the fact that they reflect the incident sunlight in a greenish tint and thus provide for apparently green or brownish water. It often emerges suddenly, especially in spring.

As already mentioned, floating algae only become a serious problem if they are too abundant in the pond: If this happens over a longer period of time, the pond and its inhabitants can be damaged in the long term. Due to the cloudiness of the water, for example, sunlight no longer penetrates to the aquatic plants, which can now only perform photosynthesis weakly or not at all. The result: they die. In this way, the floating algae get an important food competitor out of the way.

An increased occurrence of algae can also shake the balance because it ensures that the pH value slips and the oxygen is completely consumed within a single night: the pond “tips” and all life in it suffocates.

How Do You Fight Them?

Fortunately, there are a few ways you can get rid of the floating bellows. The simplest is the installation of a UVC pond clarifier: The radiation from this device is absorbed by the algae and “internally” destroys the structure. After the algae have been killed, the suspended particles clump together and can simply be filtered out.

Another possibility are rapidly growing pond plants, which act as food competitors for floating algae: They remove nutrients from the water, which are no longer available for the algae. For example, waterweed and hornwort are suitable here.

A third possibility are pond fish such as carp, which feed on floating algae, among other things. However, you should expect that other pond plants will also be eaten. However, this solution is only suitable for large ponds, as the fish can get very large.

Finally, there are chemical agents that ensure that the algae clump and can also be removed using a filter. Now you just have to make sure that the amount of phosphate does not lead to new algae growth.

Thread algae Algae belong to the group of green algae, which is also proven by their strong green color. They are found quite often in garden ponds and their long threads wrap themselves around plant stems, stones, or other underwater objects. After a while, these bundles of threads form such a strong network that they are difficult to get rid of.

Like the floating algae, they often appear in spring when the ice has thawed. This is because they have enough sunlight to multiply even under the ice cover – nutrients for the multiplication of thread algae are available from modern autumn leaves on the ground: a perfect growth cocktail is already prepared for the algae. When the ice thaws, the thread algae salad is revealed.

In addition to the danger to the pond values ​​and the oxygen content, thread algae are a bit more “brazen” than floating algae. When they grow and overgrow, they wrap themselves around pond plants and suffocate them and deprive them of all oxygen.

How do you get rid of them?
Many pond visitors try to wind up the thread algae with a stick or a net and lift it out of the pond – similar to how spaghetti is wrapped on a fork. However, this is a mistake that should not be made under any circumstances: the moment the algae is wound up and lifted out of the water, it leaves huge amounts of spores in the water, which in turn create new thread algae. This survival technique ensures that you can no longer get rid of the alga properly without sophisticated aids.

My thread algae cannot avoid the use of chemical aids. A special powder is applied to the thread algae and immediately begins to destroy them sustainably. You don’t need to worry about your fish or other pond plants: the remedy is only directed against the algae. Then the sludge of the thread algae can be removed with a net.

The blue-green algae is one of the particularly robust types of algae. Like floating algae, it is found in every garden pond all year round and multiplies under certain conditions, for example, a high nutrient content. Basically, blue-green algae are not algae, but (cyano) bacteria, but they are very similar to algae in their appearance. However, they are much more harmful than floating or thread algae and even develop toxins: It is nothing special that entire bathing lakes are closed because of them.
A certain characteristic for these bacteria is an oily film on the surface of the water, which sometimes also has small bubbles. This film or “carpet” is up to 2cm thick and also settles on the pond floor. If you pass through this film with a net or branch, it closes again very quickly. 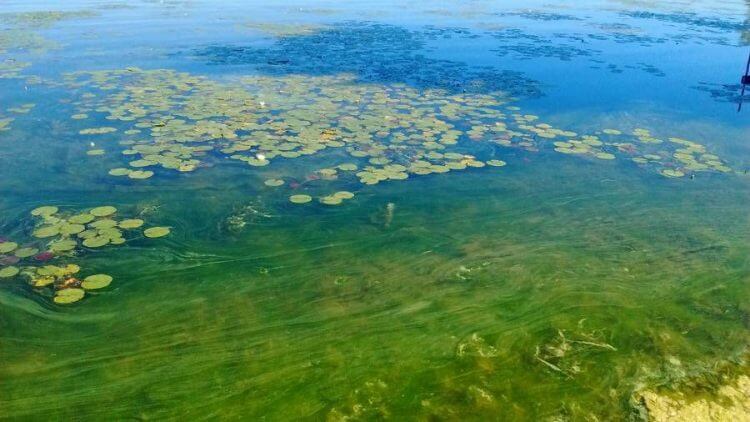 As already mentioned, blue-green algae are much more malicious than other algae: They secrete toxic substances that accumulate in the fish and damage the mucous membranes there. The fish becomes weaker and eventually succumbs to the bacteria. It is similar to microorganisms; this goes on without interruption until the entire biological equilibrium in the pond is destroyed.

How Do You Eliminate Them?

Luckily, getting rid of these types of algae is relatively easy. As with thread algae, there are numerous aids here. Simply put them into the pond according to the instructions and they will do the rest. After the algae have been destroyed, it is important to bind the excess phosphate so that the optimal pond values are restored. Once this has been seen, fish and microorganisms will soon recover.