Ostriches cannot fly. But no other bird in the world is as big and none can run as fast as the African ostrich.

The African ostrich belongs to the order Ratites and the Ostrich family. It is the largest species of bird alive today: the males can grow up to 250 centimeters in height and weigh up to 135 kilograms, and individual animals can grow even larger. Although the females are smaller, they still measure an impressive 175 to 190 centimeters and weigh 90 to 110 kilograms.

Her shape is unmistakable: her legs are long and strong, her feet have toes with huge claws. The body of the male is covered by black plumage, from which the white tail feathers stand out clearly. The females wear a lighter, whitish-grey plumage.

Legs and neck are bare and – depending on the subspecies – colored gray-blue or pink. Young birds have plumage similar to that of the females, but their wing and tail feathers are not yet clearly developed. The head, which is small in relation to the body, sits on the long, slender neck. The large eyes are striking: They have a diameter of about five centimeters. 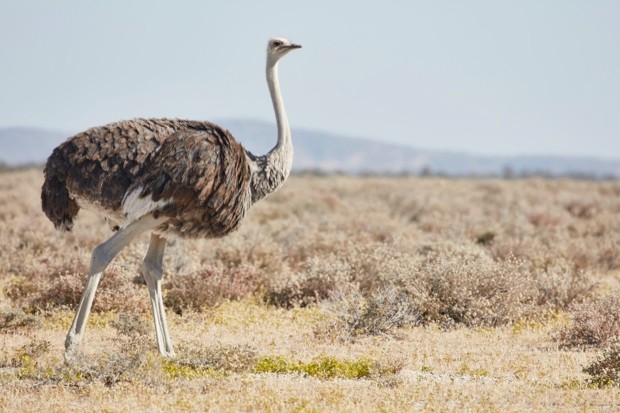 Although ostriches have wings, they are not suitable for flying: ratites are much too heavy to be able to use wings to get airborne. Their wings are only used for courtship, to shadow the young, and to keep their balance during a fast sprint.

Where does the African ostrich live?

As its name suggests, the African ostrich is only found in Africa. There it occurs mainly in East and South Africa. In the past, ostriches were also found on the Arabian Peninsula and in northern Africa. The animals are now extinct there. Ostriches mainly live in savannas and deserts. They like regions where the grass grows a maximum of one meter high and where there are sparse trees. There they can walk and run freely.

Which (African) ostrich types are there?

There are four subspecies of ostrich in different regions. The fifth subspecies, the Arabian ostrich, is now extinct. Close relatives are the emus in Australia and the South American rheas – both are also flightless ratites.

How old does the African ostrich get?

Ostriches live to be around 30 to 40 years old in the wild. Animals kept in zoos can live even longer.

How does the African ostrich live?

The animals are active during the day and search for food, especially in the twilight hours in the morning and evening. When they sleep, they lie down on the ground, but keep their necks and heads high. Only when they are deep asleep do they lay their neck and head on the ground or in their back feathers.

Ostriches are very well adapted to life in their hot, dry home: They don’t need to drink but can get their water requirements from food. Therefore, they can survive long dry seasons and also cross deserts. They are sociable birds that live in groups of different sizes outside of the breeding season: Usually there are only five, sometimes up to 50 animals. Even larger groups gather at waterholes.

Although there is a clear hierarchy in these groups, the cohesion is not very close: the individual ostriches always come together to form new groups. During fights within the group, the animals show typical threatening gestures: they spread their wings and tail feathers and stretch their necks up. If a bird submits to the superior, it bends its neck in a U-shape and lowers its head. 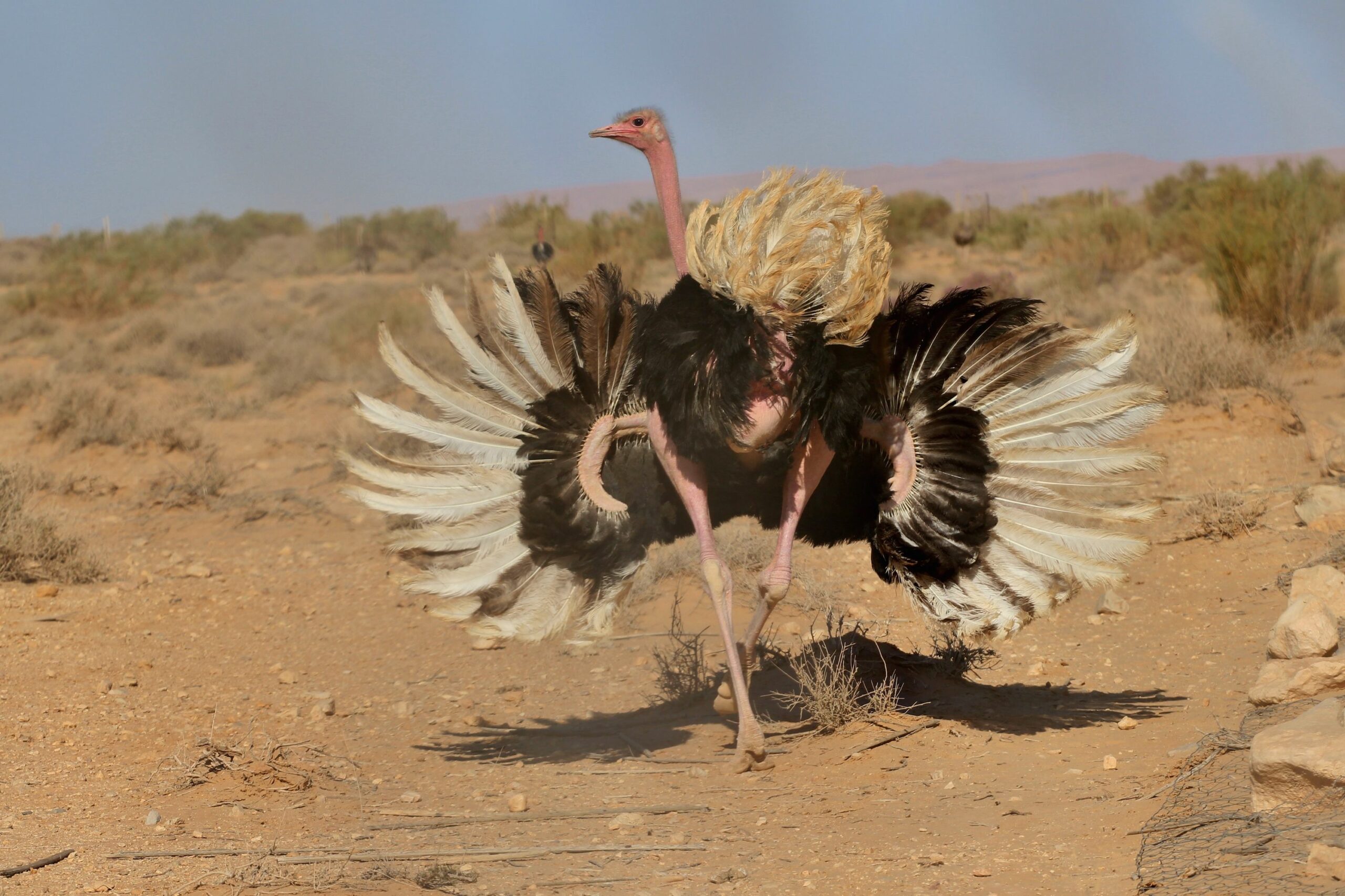 It is often said that ostriches stick their heads in the sand when they are in danger. Of course, that’s not true. But how did this rumor come about? This is probably because, when threatened, the birds sometimes lie down flat and stretch out their necks and heads on the ground – then their heads and necks can no longer be seen from a distance.

Friends and foes of the African ostrich

Lions and leopards can be dangerous to ostriches. The birds protect themselves from them by living in groups and keeping an eye out for predators. In addition, ostriches can not only run away quickly but also defend themselves very well: with one kick of their powerful legs, they can kill a person and even a lion. And their mighty claws, up to 10 centimeters long, on their toes are dangerous weapons.

How does the African ostrich reproduce?

The mating season is between June and October in some regions of Africa, in other areas the birds can mate all year round. When it is mating season, you can clearly see this in the male ostrich: the color of the skin on their necks is then particularly intense.

Now the birds no longer live together in loose groups, but the males gradually try to gather a harem of three to five females around them. The ostrich cock looks for the main hen and secondary hens. These are mostly younger females. To capture the female, the ostrich flaps its wings up and down, inflates its neck, swings it left and right, and approaches the female.

After mating, the main hen chooses one from among the nest pits the male has dug. In this, she lays eight to twelve eggs. The secondary hens also lay their eggs in this nest – but on the edge around the eggs of the main hen. The eggs of the side hens are the first to fall victim to possible nest robbers. An ostrich egg weighs between 1.3 and 1.8 kilograms and is equivalent to around 24 chicken eggs. After oviposition, the secondary hens have driven away, and the male and the main hen take care of the brood together.