Wolves are the wild ancestors of our domestic dogs. Depending on where they live, they vary in size and coat color.

Wolves look similar to German shepherds but are stronger, have longer legs and shorter necks.

Wolves are 110 to 140 centimeters long from the tip of the nose to the buttocks, the bushy tail measures 30 to 40 centimeters. They are 65 to 80 centimeters high and weigh between 25 and 50 kilograms.

European wolves have a dark gray to dark brown coat interspersed with some yellowish-blond hairs.

However, North American wolves can also be black in fur, and there are even white animals up in the freezing north.

Wolves with light brown to blond fur live in the Near East. Wolves that live far north tend to be larger, have longer fur and have smaller ears than wolves in the south.

This helps them lose less energy over the body surface and stay nice and warm.

Where do wolves live?

Wolves used to be found throughout the northern hemisphere: in Europe, in Asia as far south as India and southern China, throughout North America except the southeast, and even in Greenland and many other arctic islands.

In Europe, wolves have been wiped out in many areas. Small packs still live in Spain, Italy, and central France. There are still comparatively many wolves in south-eastern Europe and in eastern and north-eastern Europe. Wolves from Eastern Europe are now migrating back to Germany.

As long as they can find enough prey and quiet hiding places to raise their young, wolves are very adaptable to a wide variety of habitats.

What types of wolves are there? 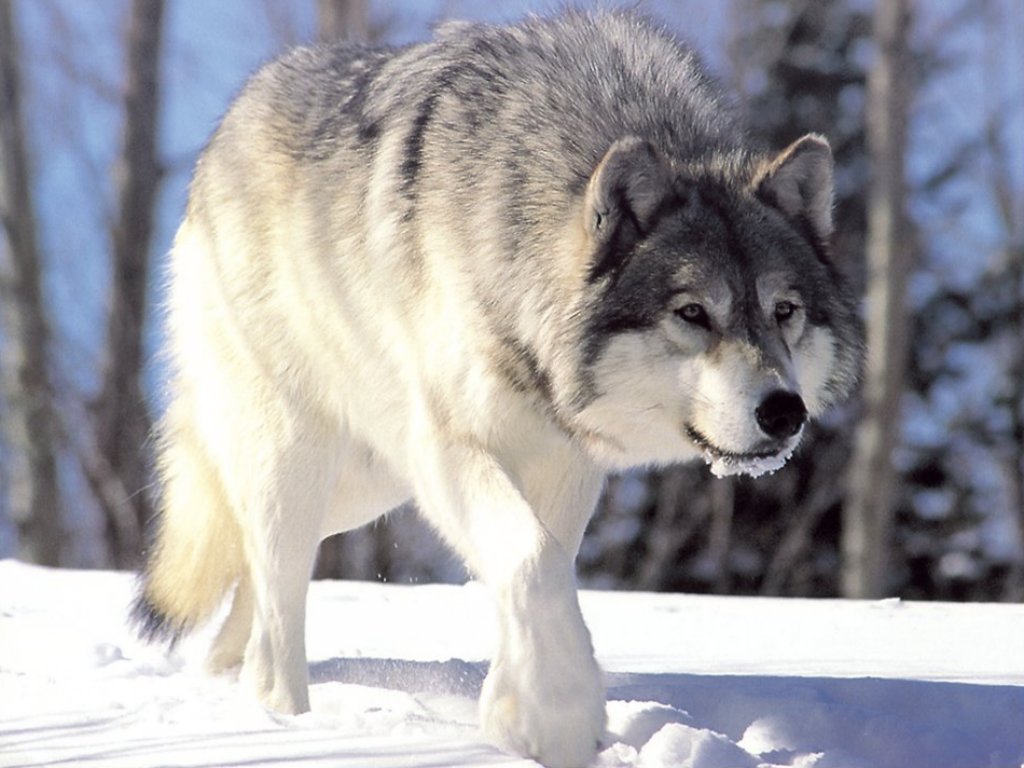 There are about twelve different subspecies of wolves that occur in different regions of the world. They all live in packs but often vary in size.

For example, the timber wolf lives in North America. This subspecies is about 10 centimeters taller and longer and up to 10 kilograms heavier than the European wolves. The animals also often have darker fur.

Another subspecies are the arctic wolves. They live far north in Canada, Greenland, Finland, and Siberia. These wolves are perfectly adapted to life in the cold: they are slightly smaller than normal wolves, have smaller and more rounded ears, and have a shorter snout. They lose less heat over the body surface.

They also have much thicker and longer fur: 6,500 hairs grow in an area of ​​one square centimeter. For comparison: We humans have just 200.

Thanks to this dense fur, arctic wolves can withstand temperatures as low as minus 50 degrees Celsius. In addition, the fur of the polar wolves is white – so they are very well camouflaged in the snow.

The golden jackal, which lives from North Africa across Asia Minor to Southeast Asia, is very similar to the wolf. But he is much smaller than the wolf.

How old do wolves get?

Wolves can live up to ten to twelve years. But few animals live that long in the wild.

How do wolves live?

Wolves are pack animals. They live together in large families and know that only together are they strong enough to take down large prey. Wolves who have been expelled from a pack and live alone or in pairs have a very difficult time. They can only hunt small animals like mice or rabbits and often suffer from hunger.

A wolf pack consists of ten to twelve animals, sometimes even up to twenty. A wolf parent pair usually lives together with the older, one to two-year-old cubs and the very young puppies. But sometimes I also join aunts, uncles, and cousins ​​in the pack.

Wolves are mostly active at dusk and at night; in regions where they are undisturbed, they are also out and about during the day. They live in a two to five-square-kilometer territory, which they constantly roam to mark the boundaries with scent tags and to keep out strange packs.

In addition, wolves howl at night, announcing to other packs: This is our territory! In one night, wolves can roam up to 50 kilometers through their territory. They look out for food. Together they even manage to hunt down huge mooses that feed the whole pack for days.

Every wolf has its place in the pack. Each animal must adhere to this strict hierarchy. Most of the time, you can see who the boss is at first glance: an animal that is at the top of the rank has its head held high and it’s tail erect. This animal is the alpha wolf. He provides offspring and leads the pack when hunting.

Whoever has a middle position in the pack carries its head high, but the tail remains horizontal. The animals at the bottom of the hierarchy can be recognized by their heads lowered and their tails tucked in. There is usually a couple at the head of the pack: the leader wolf ensures peace and order for the males, the leader wolf for the females.

Friends and foes of wolves

Wolves have hardly any enemies, at most bears or lynxes could be dangerous to them.

How do wolves breed?

Mating takes place in winter between December and March. About nine weeks later, the mother wolf gives birth to three to six pups in a den. They are still blind, only open their eyes after ten days, and are suckled by their mother for two to three months. Only after three weeks do they venture out of the cave for the first time – always well guarded by the she-wolf.

In the first weeks of the life of the little wolves, the wolf father provides the wolf mother and the cubs with food. He goes hunting and deposits his prey in the entrance of the cave. The boys help themselves too because they already have small, pointy teeth. Most of the time, however, the parents pre-digest the food in the stomach and regurgitate the porridge for the puppies.

To do this, the puppies nudge their parents with their snouts in the corners of their mouths. This triggers the stimulus to regurgitate the pre-digested food. Once the young are a little larger, they are raised by all the older members of the pack: Siblings, uncles, and aunts are the babysitters while the wolf parents go hunting.

How do wolves hunt?

Only by hunting together in a pack is it possible for wolves to kill really large prey. The hunt begins with an important ceremony: the whole pack howls. So they assure each other: “We belong together and together we are strong.” The leader of the pack determines when the hunt begins.

Sometimes the pack has to follow a herd for days before the hunt is successful. To do this, they observe the animals and wait for a favorable opportunity. Often two wolves will chase the prey while the others hide and ambush the exhausted deer or stag to overwhelm it. Once the prey has been killed, they all eat together. There is also enough food for the lower-ranking animals.

Since wolves usually hunt weak or sick animals, they are particularly important for the ecosystem. They ensure that only healthy animals survive and reproduce.

How do wolves communicate?

Just like our house dogs, wolves can growl, howl, and bark. However, they are famous for their howling, which can be heard at night, especially in winter and spring.