Whether in the home office or watching Netflix on the sofa – sometimes your cat appears to appear out of nowhere, rams you with its head, or rubs it against your body. But don’t worry: your pussy’s headbutt is a good sign. Your animal world explains why.

Would you have known When your cat nudges you with her head, it is a sign of her affection? But why does your cat show its love with a head nut – instead of licking your face like a dog?

When kitties nudge things or living beings with their head and rub their face against them, they mark them as “theirs”. Because they leave behind pheromones, i.e. fragrances.

So actually a good sign – behavior experts for pets are also sure of that. For example, Marilyn Krieger said in a conversation with the magazine “Catster”: “When a cat rubs itself against you, it exchanges its scent with you. It reinforces the fact that you are part of their group. ”

Of course, cats don’t see you as their territory, but really as part of their pack. It is therefore also a clear sign that your cat accepts you and trusts you. Kitties are more likely not to rub themselves against people they don’t like.

Cat Says With Her Headbutt: Scratch Me! 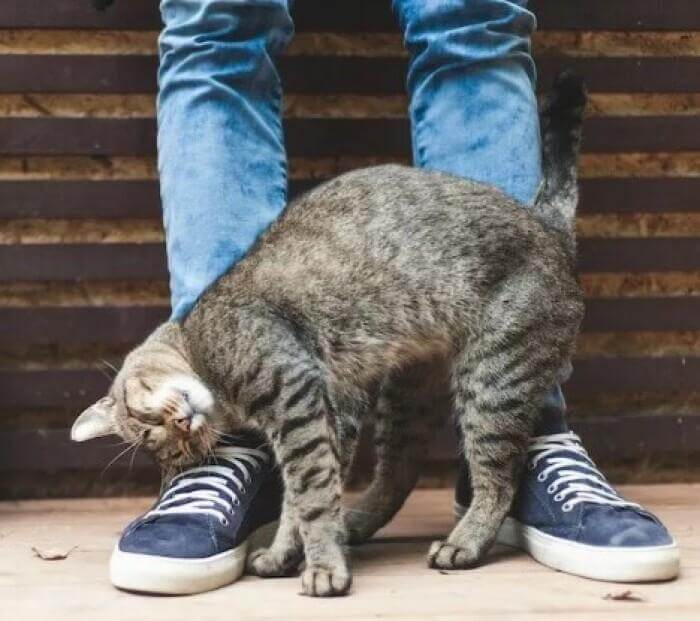 But there are other reasons your cat can give you a little headbutt. Because the head, neck, and cheeks are some of the body parts that cats prefer to be petted.

So maybe they invite you to massage through the head nut. “Your cat shows you what feels good for it,” explains Liv Hagen, a specialist in animal behavior, to “The Catster”.

Rubbing her face can also help the velvet paw calm down when she feels insecure. “You may have noticed that your friend’s shy cat keeps his distance, but rubs itself madly on the chair she’s sitting next to.” This behavior can help cats be sure of something, explains Liv. “According to the motto: I don’t know you and I feel a little stressed. But I know that this is my chair and it makes me feel better. ”

How can you react to your cat’s behavior? By giving her affection: petting and petting your puss – she enjoys that very much. At the same time, you leave your scent mark on their fur and additionally strengthen your feeling of togetherness.