It’s an eternal hunt: Again and again, this nasty, redpoint comes off – and the house tiger tries, again and again, to finally catch it. Cat owners should be familiar with the endless battle between cats and laser pointers. But why do cats want to catch the point of light so much? And is that a species-appropriate game at all?

Even if, unlike its wild counterparts, your cat does not have to hunt in order to survive, it still has a natural hunting instinct. And that is addressed when suddenly a red dot whizzes through the living room.

Cats interpret points from laser pointers as small prey animals that flee and try to hide. Of course, your cat will then pick up the chase. Hunting, slamming, killing – according to The Spruce Pets, this is the natural behavior of cats. Your cat doesn’t care that the laser point is only a projection. It then works on autopilot.

Contents show
1 Cats Perceive the Smallest Movements
2 Controversial Question: Should Cats Really Play With Laser Pointers?
3 Include Other Toys in the Laser Hunt as Well
4 Laser Pointers are Dangerous – For Cats and For Humans 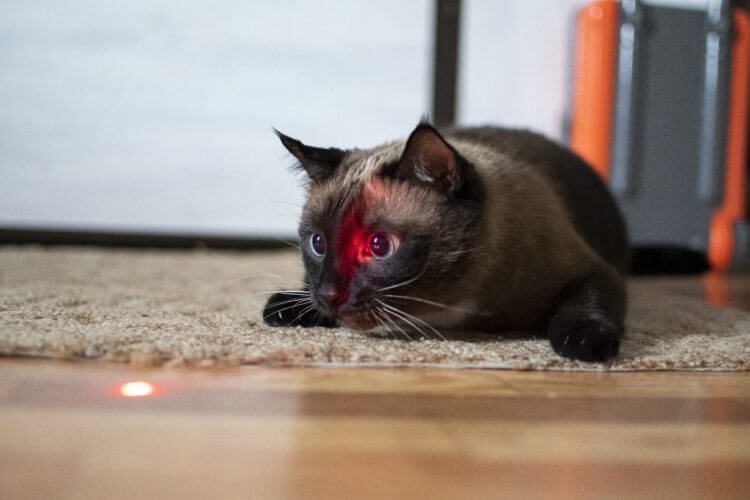 But also certain properties of cat eyes explain the fascination of our kitties for laser pointers. The retina – one of the main structures of the eye – consists largely of two different cell types: rods and cones. Rods are responsible for seeing light and dark and the perception of movements, cones for color perception.

Cats have more rods than cones in their retina. This means that you can perceive even the smallest movements. So it’s no wonder that a moving point of light attracts their attention and encourages them to hunt.

Whether cats really have fun chasing after the points from laser pointers is controversial. After all, the kitties never get there. While in nature success (or failure) occurs at some point after hunting, the cat always remains in hunting mode with laser hunting. And that can be frustrating.

Some velvet paws lose interest at some point, others even show aggressive behavior. “Laser pointers can frustrate cats, over-stimulate them and lead to aggression towards other cats,” says Marilyn Krieger, behavior expert at “Catster”. In most cases, laser pointers should stay in the office and be used for their actual purpose: showing details in presentations. ”

Include Other Toys in the Laser Hunt as Well

But there are also cats who like to chase the red dot and show no signs of frustration. Even so, Krieger suggests including other cat toys in laser hunting. For this, you need a few cat toys and some treats in addition to the laser pointer.

Spread the cat toys around the room and move the laser point back and forth in front of your cat in a zigzag. Lure her to one of the distributed toys and then let the point pause briefly on the toy. Now your cat can “catch” the point. “The toy replaces the prey,” explains Krieger. “Before you let the point of light wander away from the toy, your cat has to feel the toy under its paws.” This is how it experiences actual hunting success.

You shouldn’t let the hunt end suddenly. Complete the game by moving the laser pointer more slowly and finally letting it come to rest on a toy. After your cat has caught its last “prey”, it will be given a treat.

Laser Pointers are Dangerous – For Cats and For Humans 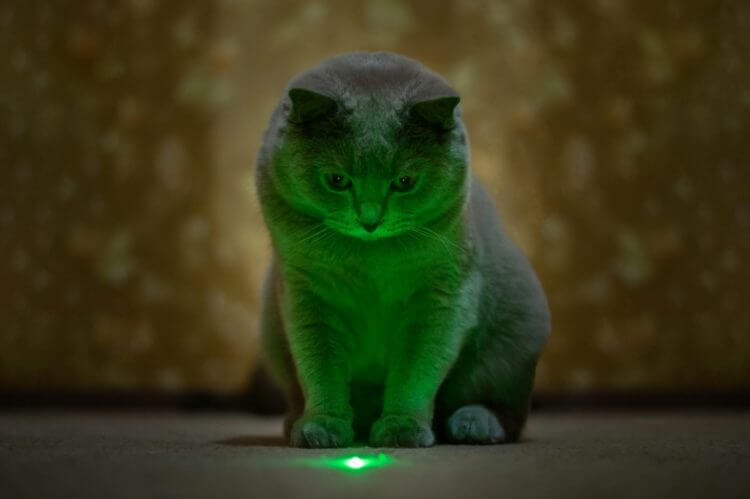 With all the fun cats can have to play with laser pointers, you should never forget that laser beams are dangerous. Laser pointers – including those sold as cat toys – emit a very strongly focused light. Never shine your cat (or any other animal or human) in the eye. This can lead to impaired vision and eye injuries.