In the aquarium hobby, everything depends on the water values in the tank. If they match the inhabitants of the pool, everything will flourish, but if a value gets out of balance, the whole system threatens to overturn. Here you can find out which values need to be differentiated and how to keep them under control.

Water is Not Always Water

In nature, there is a multitude of habitats in which underwater creatures cavort. From rough distinctions such as seawater or freshwater, one can make smaller steps, for example with the division into “reef”, “open water” and “brackish water”; in the case of freshwater, one encounters categories such as “stagnant water” or “flowing water with strong currents”. In all of these habitats, the water has very specific values, which depend on factors such as climatic influences, constituents, and organic and inorganic pollution.

Special Case: the Water Values ​​in the Aquarium

If we look at the world in the aquarium, the whole thing becomes even more special. In contrast to nature, the basin is a closed system, which is less influenced by environmental and climatic factors; After all, the pool is in the house and is not exposed to wind and weather. Another point is the smaller amount of water: Due to the smaller water volume, small errors, influences or changes affect the water values ​​much more strongly than would be the case, for example, in a 300m² lake – let alone in the open sea.

It is crucial from the beginning that you choose the stocking of your aquarium so that fish and plants have the same demands on their environment. It doesn’t work to cover very different needs. If you have a selection of pool inhabitants who have the same natural environment, it is important to establish the correct water values ​​before starting. It is not crucial to copy the model water type 100%. This is not even possible in a normal aquarium, and most of the inhabitants will probably be offspring that did not grow up in the natural habitat. The declared goal is much more to have stable water values ​​that match the needs of the fish and plants so that a healthy biological balance is established in the tank in the long term.

The Top 7 Most Important Water Values

In the process of breaking down dead plant leaves or fish excrement, for example, ammonium (NH4) and ammonia (NH3) are produced in the aquarium. Ammonia is very toxic. Fortunately, there are 2 groups of bacteria that gradually metabolize these substances. The first group converts them to toxic nitrite (NO2). The second group in turn uses nitrite and turns it into harmless nitrate (NO3). Nitrate in concentrations of up to 35 mg / l is common in a stable aquarium and does not harm your fish. And it is beneficial for the growth of your plants: It provides them with a lot of nitrogen, which they absolutely need. But be careful: concentrations that are too high can have negative effects. This rarely happens, but you should keep an eye on this value to be on the safe side.

Nitrite (NO2) can quickly become life-threatening for your fish and other aquarium inhabitants. It should therefore not be detectable in the aquarium with standard water tests. If it does happen, you urgently need to search your aquarium for rotten spots. Dying plants and dead fish in the pool have a very negative effect on the water quality. Remove them and carry out a large partial water change (approx. 80%). You shouldn’t feed for the next 3 days and should change the water 10% daily. After the mishap, check the water values ​​at least once a day for at least 7 days. Excessively high stocking densities represent a risk factor for increases in nitrite.

There is only one time when an increase in the nitrite concentration in the water is permitted and desirable: the running-in phase. The value then rises rapidly within a few days and then falls again. Here one speaks of the “nitrite peak”. If nitrite is then no longer detectable, fish can move into the tank.

One of the values ​​that are found most frequently outside of the aquarium hobby is the pH value. This describes the degree of acidity that prevails in each body of water. It is indicated on a scale that ranges from acidic (pH 0– <7) to basic (pH> 7–14). The neutral value is at a pH value of 7. In the aquarium (depending on the number of fish and plants), values ​​around this point between 6 and 8 are usually ideal. Above all, it is important that the pH value remains constant. If it fluctuates, the inhabitants of the pool react very sensitively and come under stress. To prevent this, you should check this value once a week. Incidentally, the right carbonate hardness can help here.

The total hardness (GH) indicates the content of dissolved salts in the water – especially calcium and magnesium. If this content is high, the water is said to be hard; if it is lower, the water is soft. The total hardness is usually given in ° dH (= degree of German hardness). It is crucial for all organic processes in the aquarium and should be monitored more closely if you want to breed. Similar to the pH value, it is important here that the GH is aligned with the fish.

There is also another “hardness value” in the aquarium: The carbonate hardness (KH) indicates the content of hydrogen carbonate dissolved in the water. This value has already been mentioned for the pH value because the KH serves as a buffer for it. This means that it stabilizes the pH and prevents changes from occurring too quickly. It is important to know that the carbonate hardness is not a static value. It is influenced by the biological processes taking place in the aquarium.

Next, we come to carbon dioxide (CO2). Just like we humans, fish consume oxygen when breathing and give off carbon dioxide as a metabolic product – in the aquarium this goes directly into the water. It is similar with plants, by the way: they consume CO2 during the day and produce useful oxygen from it, but at night this process is reversed and they too become carbon dioxide producers. The CO2 value – just like the pH value – must be constantly monitored, because it can be a real danger for the fish, on the other hand, it is vital for the plants. You must therefore regularly check the entire interplay of CO2, KH, and pH value because they influence each other: For example, small CO2 fluctuations lead to significantly more serious pH fluctuations, especially when the KH is low.

Oxygen (O2) is probably the most important (vital) value in the aquarium, because without it, neither fish nor plants or beneficial bacteria, which rid the water of pollutants, can survive. Oxygen enters the pool water primarily through plants (during the day), the water surface, and additional technology such as aerators and air stones.

Use of Water Care Products 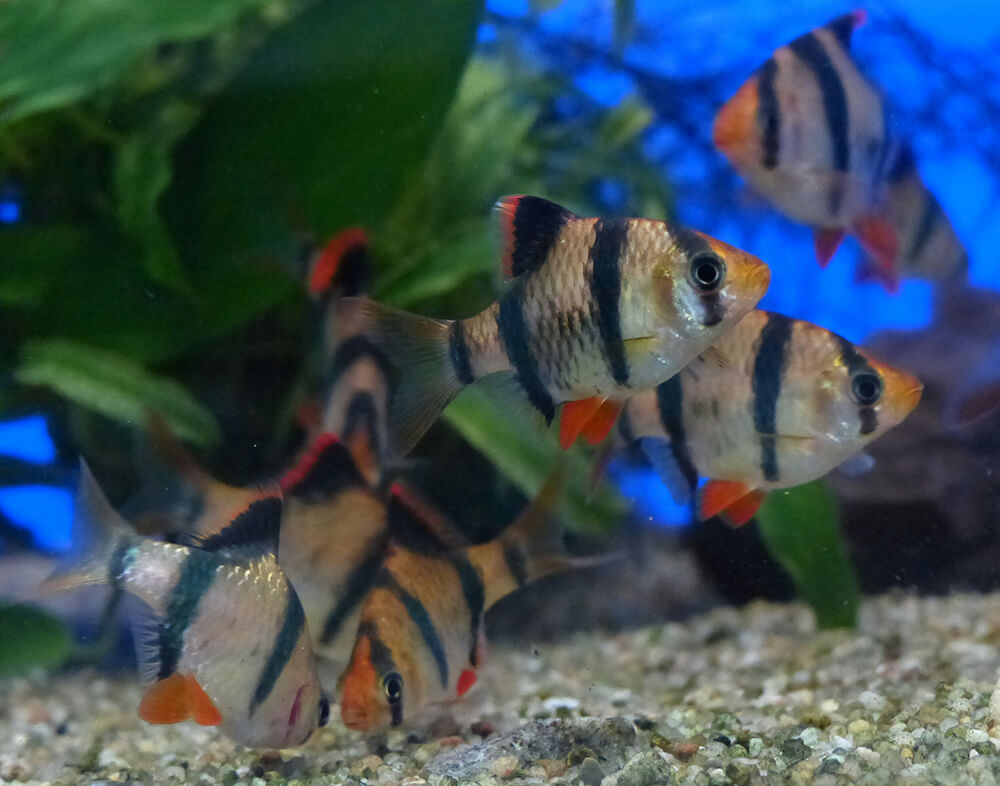 Now that we have taken a brief look at the most important water values, we would like to briefly explain how these values ​​can be stabilized and corrected in a practical way: namely with corrective agents and water conditioners. For example, if you take a look at the water care range in a pet shop, there are certain remedies for each water value that should bring it back to the ideal value. It is important to emphasize that they can only help to a certain extent: if, for example, the relationship between tank volume and fish stock is incorrect, even the best water conditioners cannot contribute to the biological balance in the long term.

That is not to say that corrective agents and water conditioners are not useful tools: they just need to be used with care. Therefore, as a beginner in the aquarium hobby, you should first deal with the water value issue before you juggle with various water conditioners afterward in order to get ideal water values.