Uromastyx are reptiles. Not only do they look similar to South American iguanas, they also inhabit similar habitats in Africa, Asia, and Australia. Uromastyx lizards are reminiscent of primeval reptiles:

The flat body appears rather clumsy, they have a large head, a long tail, and long legs. The body is covered with small scales. From the head to the tip of the tail, they can grow up to 40 centimeters long. Animals kept in captivity can even reach 60 to 70 centimeters in length.

The animals can store water in their tail, which makes up about a third of their body length. He is also studded all around with spikes and serves as a weapon.

The coloring of the thorntail dragon can be very different: in the North African thorntail dragon, for example, it is blackish with yellow, orange-red, and red spots and bands, or brown to olive green in the Egyptian thorntail dragon. The Indian thorn-tailed dragon is khaki to sandy yellow in color and has small dark scales. However, thorn-tailed lizards can change their skin color, for example, they are darker in the early morning to absorb more heat from the sun. If the body temperature rises, the skin’s light color cells expand so that they absorb less heat. 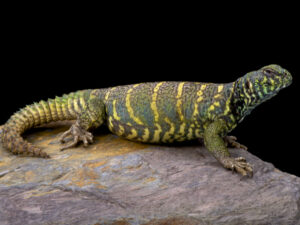 Where does Uromastyx live?

Uromastyx lizards live mainly in the dry areas of North Africa and Asia from Morocco to Afghanistan and India. Uromastyx only feels comfortable in very hot, dry areas. That is why they are mainly found in the steppe and in deserts, where the solar radiation is very high.

What species of thorntail dragon is there?

How old do Uromastyx get?

Uromastyx becomes quite old: Depending on the species, they can live for ten to 20, sometimes even 33 years.

How does Uromastyx live?

Thorntails are diurnal animals and live on the ground. They like to dig caves and passages, from which they rarely stray far. They also usually look for their food in the vicinity of their burrows; once they stray too far from their protective den, they become nervous and restless.

As soon as danger threatens, they quickly disappear into their cave. They have a special technique to protect themselves: They inflate their bodies with so much air that they really wedge themselves in their cave and close the entrance with their tails. They also use their tails to defend themselves against enemies by whipping them violently.

Uromastyx, like all reptiles, has to shed their skin regularly and are cold-blooded, which means that their body temperature depends on the temperature of their surroundings. The animals can even withstand temperatures of around 55 °C.

Your body is also designed to get by with very little water. Uromastyx communicates with each other with gestures and visual signals. They threaten an opponent by hissing with their mouths wide open. Uromastyx species, which come from the northern regions of their range, need two to three weeks of hibernation at around 10 to 15 °C.

This is especially important if you want to breed the animals because hibernation keeps them healthier. Before they go into hibernation, they don’t get anything to eat for two to three weeks, the lighting duration in the terrarium is getting shorter and the temperature should be a little lower than usual. In order to still be able to excrete salt from the body, they have special glands in their nostrils through which they can excrete the excess salt that they have absorbed with plant food. This is why small, white mounds can often be seen at their nostrils.

Friends and foes of the Uromastyx

Young Uromastyx can be particularly dangerous to predators and birds of prey.

How do Uromastyx lizards reproduce?

The mating season for uromastyx is usually in March and April. The males court a female by making moves that resemble push-ups. This is followed by the so-called spinning top dance: the male runs around in very tight circles, sometimes even on the female’s back.

After mating, the female becomes fatter and eventually lays up to 20 eggs in the ground. After an incubation period of 80 to 100 days, the young, six to ten centimeters long, hatch. They are only sexually mature at the age of three to five years. 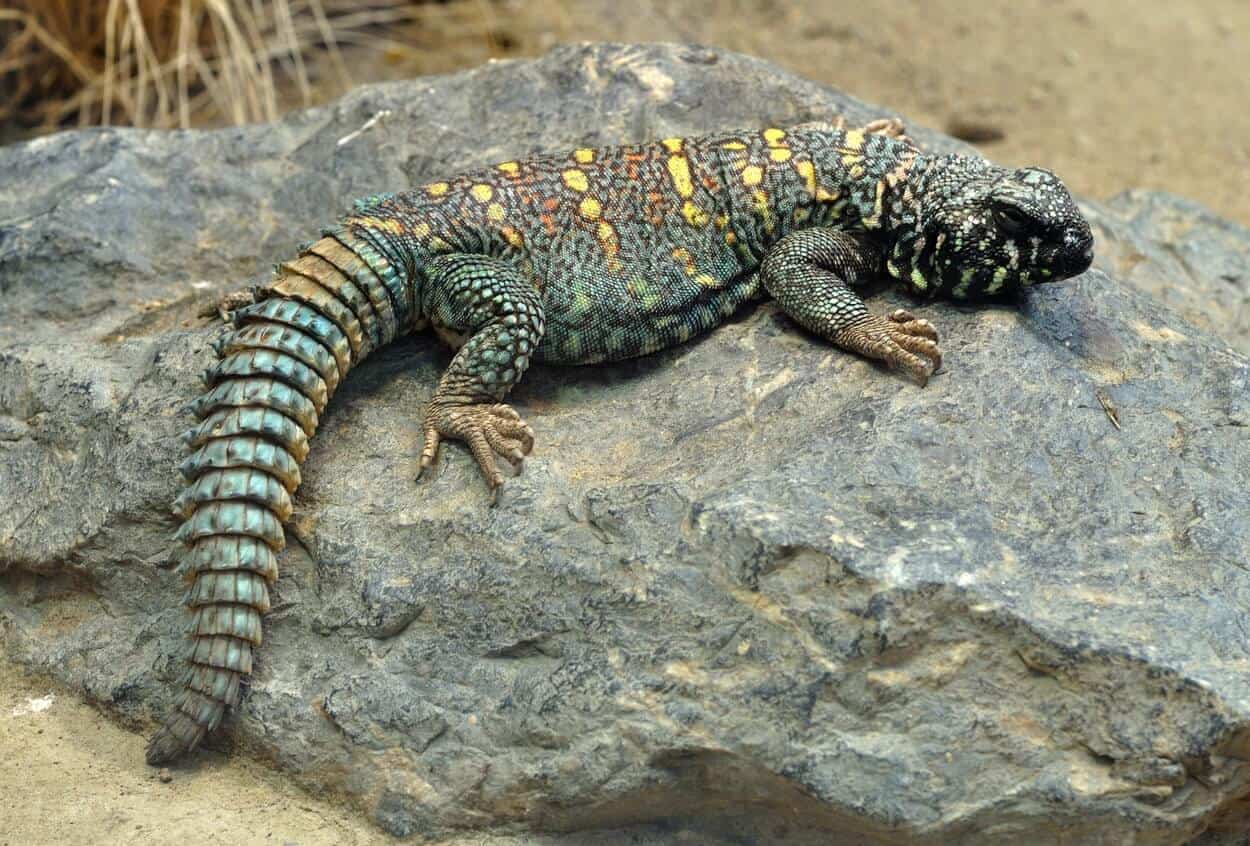 What does Uromastyx eat?

Uromastyx are omnivores. They feed primarily on plants, but also like to eat crickets and grasshoppers. In the terrarium, they get clover, grated carrots, dandelion, cabbage, plantain, spinach, lamb’s lettuce, iceberg lettuce, chicory, and fruit. Young animals need more animal food than adults, which only get grasshoppers or crickets once a week.

Because uromastyx grows quite large, the terrarium must be at least 120 x 100 x 80 centimeters. If you have space for a larger container, it is of course better for the animals. Coarse sand is spread 25 centimeters thick on the floor and decorated with stones, cork tubes, and branches: It is important that the animals can withdraw and hide from time to time.

The terrarium must be illuminated with a special lamp, which also heats it. Since uromastyx come from the desert, they also need a real desert climate in the terrarium: the temperature must be 32 to 35 °C during the day and 21 to 24 °C at night. The air should be as dry as possible. Only during molting should you spray some water every few days. Only two young animals or a pair should be kept in a terrarium – if you put more animals in there, arguments often arise.