Last summer was dry, far too dry. It was so dry that the grass grew poorly or not at all. And because the pastures no longer offered any fodder for the horses, the little hay that could be harvested had to be fed early in the year. Since last winter there has hardly been a horse owner who does not know this problem at least from horse friends – but often also from their own stables: the hay is scarce. But how can you improve the heuration in a meaningful way?

Contents show
1 What Heuration Does My Horse Need?
2 Hayage and Silage
3 Haycobs
4 Straw: Which Straw and How Much?

What Heuration Does My Horse Need? 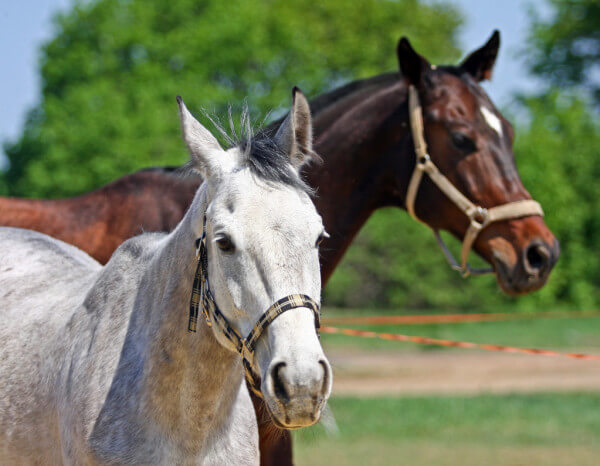 This winter there were horse owners who imported whole trucks with bales of hay from Poland and other countries. But of course, this is not an option for companies that neither need nor can store such large quantities. For them or for horse owners who are only adjusters themselves, the question, therefore, arises of how much hay they really need per horse and how they can improve the heuration. As a rule of thumb, a horse needs at least 1.5 kilos of roughage per 100 kilograms of body weight, that would be at least 9 kilograms of hay per day for a warm-blooded animal that weighs 600 kilograms. Of course, the age of your horse, breed, and work performance must always be taken into account. Growing young horses and pregnant mares also need more. The heuration itself can best be fed with hay nets or special racks, from which the horses have to eat slowly. This extends the feeding times and thereby reduces the times when your horse has nothing to eat. Too long without food is always harmful to your horse. It can develop stomach ulcers.

Hay is the ultimate horse feed. It is obtained from haymaking and consists of the first or second cut of grass. Hay is dried before it is pressed and should have a moisture content of around 18-20%. Good hay shouldn’t be dusty. Hayage and silage, on the other hand, are brought in a little more humid and wrapped in foil. Haylage has more than 50% dry matter and a moisture content of 40-50%. Silage contains around 65% moisture and is inoculated with lactic acid bacteria after harvest. The bacteria convert the sugar into acid, which makes the silage durable. The lactic acid bacteria give the silage a sour smell. When producing, storing, and feeding silage, it is essential to ensure that the film on the bales is not damaged, otherwise, the forage will spoil. There is also the risk of the dreaded botulism disease caused by accidentally wrapped and dead animals, which is unfortunately fatal. Hayage and silage can in principle replace a heuration – provided the horse can tolerate hayage or silage. 1.5 – 2 kilograms of haylage can replace one kilogram of hay. Silage and haylage are not suitable for horses with gastrointestinal diseases. And even horses without previous illnesses are at risk of over-acidification.

Alfalfa is one of the so-called legumes and is a forage plant. Lucerne is also known as alfalfa or perpetual clover. Alfalfa has a lot of structure and is low in sugar and starch, so it can be used to improve a roughage ration. Due to their high protein content, horses with high energy requirements can be fed with alfalfa. However, it should be noted that alfalfa contains a lot of calcium so that the calcium-phosphorus ratio can shift unfavorably – a ratio of 1: 1 to 3: 1 is ideal. However, too much calcium hampers the absorption of some vitamins and trace elements. Recent studies also raise the suspicion that alfalfa can damage the gastric mucosa, which is why it should be fed at least with caution. Alfalfa is not only available as alfalfa hay, but also as dried and pressed haycobs. These usually have to be soaked for a long time.

Hay cobs are dried hay in pellet form. You should always soak haycobs before feeding – no matter what the package says. Heucobs swell and can otherwise block the throat. With the haycobs, a heuration can be usefully supplemented, with old and tooth-sick horses it often even has to be replaced. Hay cobs are made from hay – in contrast, there are also grass cobs that are made from grass. Grascobs have a higher protein content and contain less crude fiber. So they are more suitable for horses with increased protein requirements. Everyone should really be soaked. However, there are clear differences between the varieties in terms of soaking time. If you do not have warm water in the stable or if you want to feed your horse something yourself without waiting too long, you should make sure that the cobs you are feeding not only soften quickly but also swell with cold water. If you’re in a hurry, fibers or flakes could be an alternative. The fact that haycobs are eaten quickly is actually only suitable as a supplement, not as a complete replacement for the heuration. An exception is horses that can no longer eat hay due to dental disease.

Straw: Which Straw and How Much?

Straw is rather poor in nutrients and contains a lot of crude fiber (lignin). Due to the high proportion of crude fiber, it can only be fed to a limited extent. More than 0.5-1 kilograms per 100 kilograms of body weight should not be fed (source: Bender, Ingolf: Horse keeping and feeding, Kosmos, 2015). Nevertheless, good grain straw is definitely a serious horse feed. It is low in protein and, in addition to a lot of crude fiber, also contains zinc, for example. Three kilograms of oat straw have about as much energy as one kilo of oats (16 megajoules). However, straw shorteners and herbicides often put a heavy strain on the straw – it is usually not seen as animal feed, but rather as the “remainder” of the grain harvest. Good forage straw must of course be of high quality. Oat straw is particularly suitable as feed for horses. A heuration can be supplemented with good oat straw.