Look me in the eye, kitty! Because when we look into our velvet paws’ visual organs, we can learn a lot – for example about their state of health. PetReader reveals 7 exciting facts about cat eyes.

They often have an almost piercing look, their pupils are a vertical slit – but what else is so special about a cat’s eyes? Your animal world reveals it.

Have you ever observed in your cat that one pupil is larger than the other? This may look funny, but it can be a sign of a serious illness. Among other things, eye infections, tumors, injuries to the central nervous system, or leukemia can cause the pupils to vary in size. Therefore, as a precaution, you should take your cat to the vet if you observe this phenomenon in her.

In addition, cats can develop eye diseases similar to humans: You can recognize advanced cataracts or glaucoma, for example, by a cloudy lens.

Contents show
1 A Cat’s Eyes Can Indicate Disease
2 Do Cats Have a Third Eyelid?
3 Cats Cannot See in Complete Darkness
4 Cats Have Vertical Pupils
5 Cats are Not Color Blind
6 Many White Cats With Blue Eyes are Deaf
7 Cats Show Affection With Their Eyes

A Cat’s Eyes Can Indicate Disease 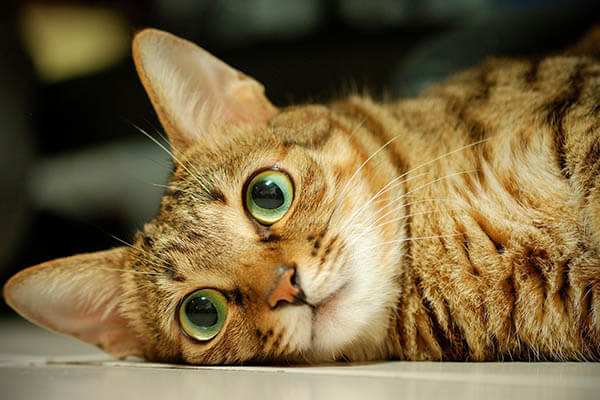 However, it is all the more important to have your cat’s eyes checked regularly in order to identify and treat diseases at an early stage – because in the worst case, your kitty can go blind if problems are ignored for too long.

Do Cats Have a Third Eyelid?

We, humans, have two eyelids: one above and one below. Cats also have a third lid on the inside of their eyes. The so-called nictitating membrane is sometimes pushed over the eye when the cat is sick, for example.

It is true that cats can see in twilight and in poorer lighting conditions than humans – but when it is dark, cats have no chance either. After all, they only need a sixth of the brightness as we do to be able to see anything.

One reason for this is a reflective layer in the retina: It reflects the light and throws it back from the cones so that the light that is there is optimally used. This layer is also likely to cause a cat’s eyes to glow green when light falls on them in the dark.

Another reason for good vision in the dark is the special shape of the pupils: In cats, they are shaped like a vertical slit and can be enlarged so much faster than our round pupils, as a study has shown. While the pupils are very narrow when there is a lot of light, they become very large in poorer light conditions in order to allow as much light as possible to the retina.

Cats are Not Color Blind

There is a persistent rumor that cats are color blind. This is not true, but cats actually do not see the world as colorfully as we do. This is because they have fewer cones than we humans. Experts believe that cats can perceive shades of blue and yellow quite well, but have difficulty distinguishing between green and red.

One thing is certain: cats do not perceive colors as intensely as we do. In addition, cats see less detail. This is also due to the fact that cats have fewer cones but more chopsticks in their eyes. Scientists also suspect that cats are farsighted and can best see things half a meter to a meter away.

Many White Cats With Blue Eyes are Deaf

Cats with white fur and blue eyes are at a particularly high risk of being deaf. And: if a cat has one blue eye and one of a different color, it is often deaf on the side with the blue eye.

Cats Show Affection With Their Eyes

Last but not least, looking in the eyes is also an important part of communicating with your cat. Because: If you look your kitty in the eye and blink slowly, you are signaling to her that she is safe. Cats would never close their eyes to their enemies because they would make themselves so vulnerable.

In a relaxed environment and close to your favorite people, that’s the absolute vote of confidence.