When it comes to terrarium lighting, there is a multitude of options and different types of lighting, all of which have individual advantages and disadvantages. So that light comes into the dark, we want to deal with the individual lighting variants and briefly describe each one. 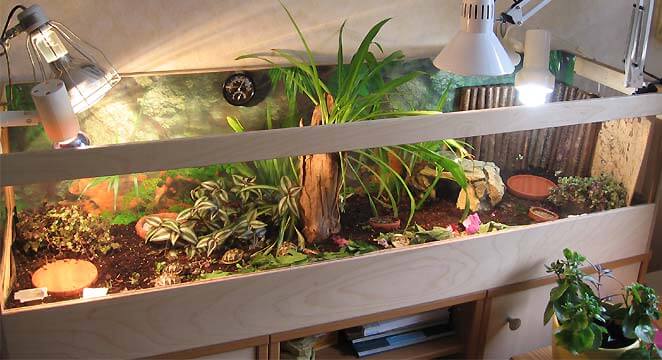 Under this point, we want to introduce the two light sources that have long been considered an integral part of terrarium lighting.

Fluorescent tubes are undoubtedly in first place among the classics of terrarium lighting and offer convincing advantages: They are among the most economical light sources and are usually the cheapest to buy. In addition, fluorescent tubes only generate little heat and also scatter their light over a large area: Thanks to this large-area illumination, with which they also ideally illuminate shaded areas, for example, they are perfect for basic lighting in the terrarium – regardless of the size.

Nowadays a distinction is made between two versions: T8 and T5 tubes. The former was first available in stores and are therefore referred to as the “older generation”: They are usually thicker and longer than T5 tubes and mostly not dimmable. As already mentioned, the newer generation, T5 tubes, are thinner and have a shorter minimum length than their predecessors: They are also suitable for use in smaller terrariums. Another advantage is that they are often dimmable and also available with UV light. Due to these advantages, a large part of the terrarium lighting can be achieved with T5 tubes alone.

As a second classic, we now want to introduce mercury lamps, which are also known as HQL and are known for their very bright light. They are also true all-rounders when it comes to terrarium lighting because they generate both visible, infrared, and ultraviolet light. However, they are real power guzzlers and need considerably more electricity than any of the other light sources listed here. In addition, they need a ballast to function. In general, they should be used in large terrariums.

Under this heading, we want to look at two types of lighting that can be used for a wide variety of purposes in the terrarium.

Reflective radiators, which in principle resemble a light bulb, have a silver coating on the back. This special coating specifically throws the emitted light back into the terrarium, which significantly increases the lighting effect.

As already mentioned, there are a large number of different reflective heaters that are used in terrarium lighting: Most of the heaters are daylight lamps or function as infrared or heat light lamps. It is not for nothing that many terrarium owners like to use them, because they offer some convincing advantages: On the one hand, they are dimmable and are particularly suitable for implementing different light cycles, on the other hand, they are usually also available in an energy-saving version (which, however, often no longer dimmable are).

These spotlights are commercially available in several versions, all of which are specialized for different purposes: There are halogen spotlights that only function as daylight lamps, but others can also be used for warmth and other types of spotlights are ideal decorative spots Mention positively than most halogen spotlights are dimmable and also cheaper to buy and operate than conventional incandescent lamps.

Finally, we come to the relatively new technology, which is represented here by LED lamps and metal halide lamps.

This type of lighting can now be found everywhere: in normal home lighting, with flashlights, car headlights, and many other types of lighting; not least in the terrarium.

The LED technology is still relatively new: While the older generations were only suitable for additional spots, it is now possible for terrarium owners to implement more and more areas of terrarium lighting with LEDs. The most convincing advantage of these types of lamps is probably the power consumption, which is much lower than other types of lighting. At the same time, however, it must be said that the purchase price is relatively high; But since this pays for itself quickly and is made up for by the low power consumption, you shouldn’t be put off by it. Finally, another decisive advantage: LEDs hardly give off any heat to the environment and are therefore ideal as additional lighting: You don’t have to worry about additional heat generation. 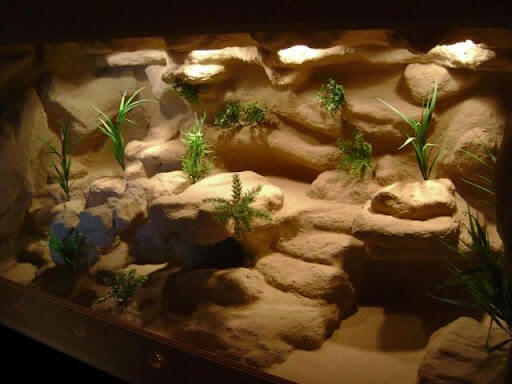 These new metal vapor lamps are considered to be a further development of the previous mercury vapor lamps because although they share certain properties, they have a significantly higher light output than HQLs. Unfortunately, they also have in common that, like their previous generation, they continue to consume enormous amounts of electricity and, in the long run, represent a rather price-intensive lighting solution. So that the power consumption pays off, they should preferably be used in large terrariums. But if you hide this point and concentrate on the advantages, the picture is extremely positive: of all terrarium lighting variants, they have the greatest luminosity in the visible range and also emit a certain amount of UV and infrared radiation.