They are rightly named: the tadpole shrimp of the genus Triops. Because for more than 200 million years they have been said to have been almost unchanged on earth. Even if more recent studies put the age at a maximum of 70 million years, they were contemporaries of the dinosaurs and survived their demise. Two species are mainly cared for.

None; however, there are subspecies and rarely kept other species with a similar appearance

The American tortoiseshell usually grows up to about 6 cm long, in exceptional cases also 8 cm. The summer shield shrimp can grow significantly larger, up to 8 cm is normal, but specimens up to 11 cm long are not uncommon.

The shield can be beige, greenish, bluish, or almost pink in color. The two large eyes at the front end of the shield are noticeable. In between, there is a hidden third eye that can be used to detect differences in brightness. The underside can be much more colorful, with sometimes strong red tones.

At T. l. there are different modes of reproduction. Often the populations consist only of females who lay fertilized permanent eggs. Then there are hermaphrodites, in which there must be two animals, and finally, there are populations where males and females are present but indistinguishable. At T. l. almost all specimens are hermaphrodites that fertilize themselves. So an animal is already a breeding approach.

The eggs are laid in the sand. The small, still free-swimming nauplii can hatch from them. Most eggs, however, need a drying phase, adapted to the natural conditions, namely to live in drying puddles. The eggs (actually cysts, because the embryo has already started developing here, but then pauses until the conditions are better again) are approx. 1-1.5 mm in size. They can be removed with the sand (some species with colored eggs can also be harvested pure). Then they are dried very well and stored in the freezer. After three to four days, the nauplii develop into small triops, which double their length every day. The growth is enormous, after 8-14 days they are sexually mature. You can then lay up to 200 eggs a day.

Life expectancy is not high, between six and fourteen weeks is normal. This is an adaptation to the fact that their habitats are drying up.

Triops are omnivores. The nauplii are given spirulina algae or powdered food (infusoria). After three days, flake food for ornamental fish can be served, and after five days it can be supplemented with frozen and (freeze) dried live food.

An adult animal should have about two to three liters of space. Young animals can be kept much closer together. Since they have to shed their skin frequently and then have a softshell, certain cannibalism is normal and can hardly be prevented.

Hatch basins for cysts only need a few liters, keeping and breeding aquariums should have at least 12 liters. Of course, there are hardly any upper limits.

The hatching aquariums have no decoration. A thin layer of fine river sand on the substrate is important for sexually mature animals. Some plants reduce the pollutant content of the heavy eaters, ventilation ensures sufficient oxygen. Lighting makes sense, but must not heat the water.

It is quite possible to socialize tadpole shrimp with other types of crustaceans (such as the common gill foot (Branchipus schaefferi), with which they also occur in nature). However, it is best to keep it in a species aquarium.

To hatch, the cysts need very clean, soft water (so-called “distilled water”, reverse osmosis, or rainwater). Adult animals are very insensitive, because of the high metabolism (about 40% of the bodyweight is eaten per day) half of the water should be changed every two days. 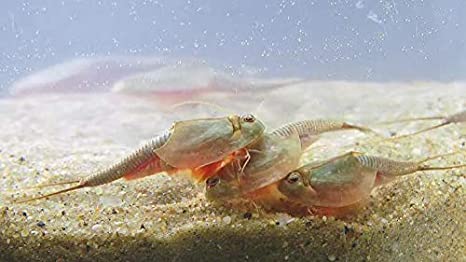 In the trade, there is mainly T. l., More rarely T. c. But other, sometimes relatively colored, species are also available from specialists, which have the same requirements in terms of keeping and breeding. Various experiment kits containing all the necessary accessories are available from toy stores. However, some of them contain Artemia crabs, which have to be kept in saltwater, go through similar development, but remain much smaller (just under 2 cm), and are more difficult to keep.