Desert terrariums and their special inhabitants make very special demands on their habitat and the prevailing living conditions. As a keeper, you have to pay attention to many aspects in order to enable a species-appropriate attitude. To visually spice up the desert terrarium and make it look more natural, you can use plants that occur naturally in such extreme habitats. And which plant organisms are there that can withstand extreme heat, drought, and strong temperature fluctuations: selected succulents!

Contents show
1 What Are Succulents?
2 Succulent Species Best for the Terrarium
3 What Conditions Do Succulents Need in the Terrarium?
4 Decorative Change in the Barren Desert Terrarium 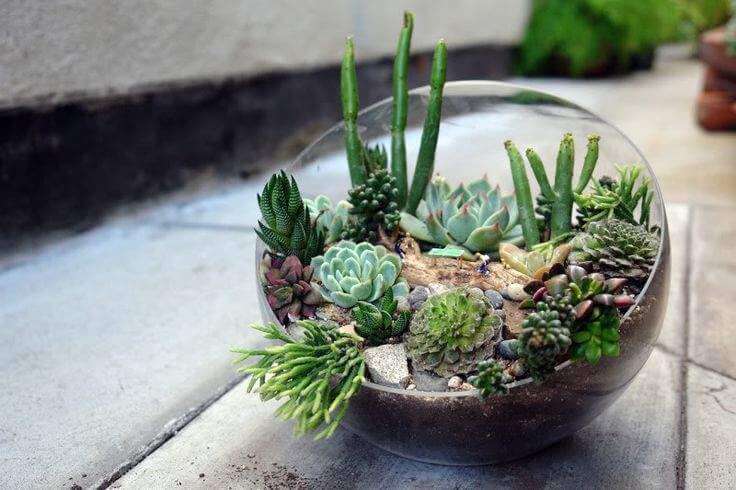 Succulents (from the Latin sucus for ‘juice’ or suculentus for ‘rich in juice’) are sap-rich plants that are adapted to special climatic and soil conditions and, due to their physical characteristics, are able to store water in the form of cell sap.

Due to this special feature, succulents can also do without water for a long time. This is a vital advantage in dry areas. Depending on which plant organ is transformed to store water, a distinction is made between leaf, stem, and root succulents. All combinations are possible.

Fluid-rich tissue is usually referred to as “succulent”. To protect themselves from water loss, some succulents have “hair” (outgrowths of the epidermis or reshaped leaves). Others, on the other hand, are partly underground and have “windows” through which the plant body is illuminated from the inside. Many succulents have no leaves. But the trunk has cells in which vital photosynthesis is carried out. Some succulents have a “folded” trunk, which increases the surface area. Most succulents mainly breathe at night to keep from losing water on the exhale.

Succulent Species Best for the Terrarium

If you decide to add live plants to your desert terrarium, there are a few things to keep in mind. Succulents can be found almost everywhere in the world, but certain plant families are only found naturally in certain regions. For example, cacti live in America (apart from the wild prickly pears in the Mediterranean region), as do agaves. Aloes and ice flowers, on the other hand, are mainly found in Africa. Spurge plants are found all over the world. So if you intend to create a true-to-original habitat, pay attention to where your reptile comes from and which plants are native there.

The next important point is the risk of injury. Many cacti have pointed thorns (= transformed leaves!), Which can be pricked very sensitively, especially if the free space is limited. Other plants contain toxins that protect them from being eaten. In the professional world and among terrarium keepers, some people are currently not entirely in agreement as to whether the “wolf milk” of the Euphorbiaceen is also poisonous for reptiles. Opinions differ widely here. Personally, I wouldn’t risk anything. Other succulents, such as B. some representatives of the midday flowers (Aizoaceae) contain alkaloids that should be avoided. Many water-storing plants, such as B. agaves, opuntia, sedum, contain oxalic acid, which should not be consumed in large quantities. How big a “large” amount is, however, remains open. And it is very important: You should avoid plants from hardware stores and supermarkets. These are often heavily treated with insecticides and herbicides and thus cause undesirable side effects.

Overall, you should always observe your animals regularly and seek veterinary advice immediately if anything is abnormal. The following genera have proven to be rather harmless or suitable for planting desert terrariums: Aloe, Gasteria, Echeveria, Agave, Sansevieria, Rhipsalis, Lithops, Conophytum, Kalanchoe, Huernia, Stapelia. “Please also note the requirements of the species (s) you keep in the terrarium. In any case, it must be avoided that the succulents end up as food. These species are not necessarily suitable for this either, and the pretty plants would also be a shame for that. ”

What Conditions Do Succulents Need in the Terrarium? 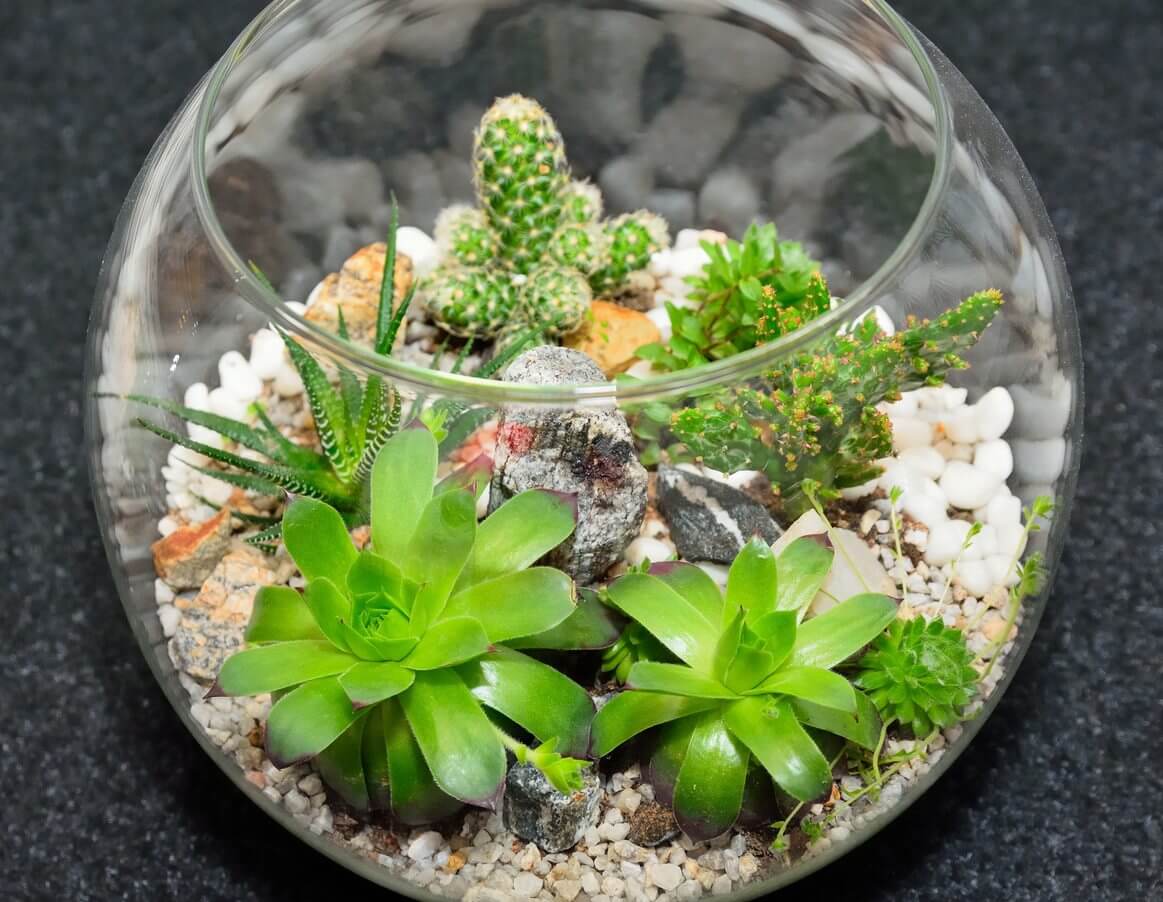 If you have now decided on certain plants and these are naturally also desert dwellers, then the living conditions, the abiotic environmental factors, are the same for flora and fauna. In this respect, you only have to pay attention to occasional watering. Keep an eye on your succulents so that you can respond to changes. If it turns out that, contrary to expectations, the plant is not coping so well with the prevailing environmental conditions, then you have to remove it from the terrarium before it is damaged by it.

Under no circumstances should you plant your succulents directly, but always keep them in a plastic pot, as the microclimate in the root area is easier to manage here and, as I said, you can react more easily. To make the whole thing look good, I recommend larger stones for decoration. I would also use a saucer so that the desert terrarium is not unnecessarily moistened when watering. It is also important not to place the plants directly in the hot area of ​​the desert terrarium, as this inevitably leads to rapid drying out. 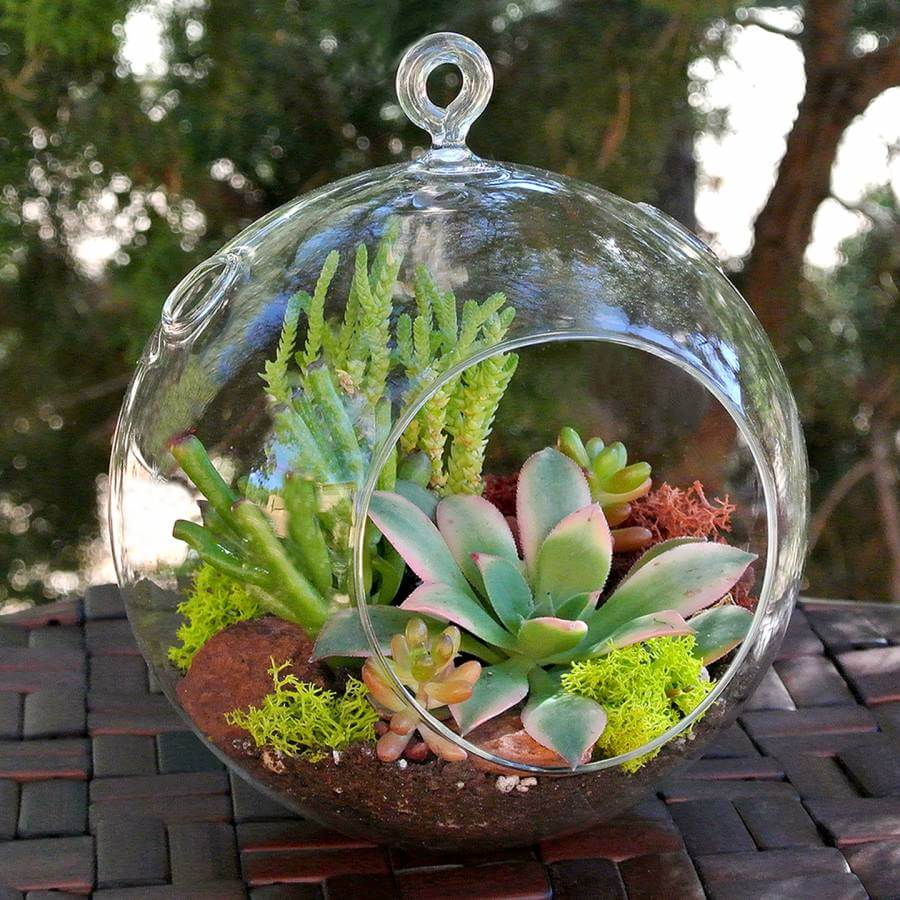 If you have decided on a desert terrarium as a keeper, then you have chosen a demanding task that requires a lot of control and regular observation from you. You can visually spice up the living space by integrating real, living plants. These are then additional living beings that have to be taken into account, but they give the whole thing a little more authenticity and represent an additional eye-catcher.