Many people quickly forget that even children can raise dogs on an equal footing. New research now reminds us of the special relationship between our youngest and four-legged friends.

Children and dogs often have a special bond – many of us know this from experience, and this is supported by several studies. However, sometimes there is no mutual understanding. Children often make mistakes when communicating with their four-legged friends without wanting to, and, for example, the risk that animals will attack them.

A recent study by scientists from Oregon State University shows that children and dogs work well together as well. Because they found that dogs watch children closely and adapt their behavior to that of children. 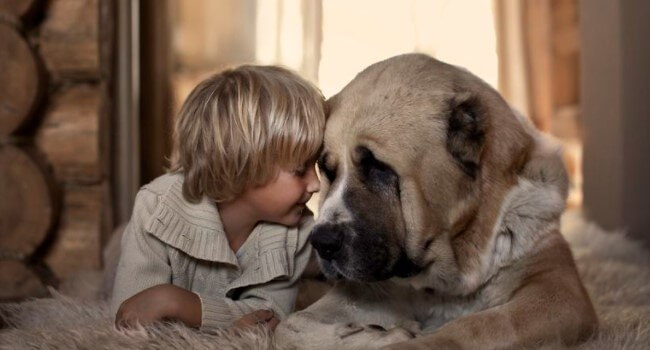 “The good news is that this study suggests dogs are paying close attention to the children they live with,” Monique Udell, lead author of the study, told Science Daily. “They respond to them and in many cases behave in sync with them, which is a sign of a positive relationship and the basis for strong bonds.”

In their study, the authors observed 30 children and adolescents, ages eight to 17, with their pet dogs in various test situations. Among other things, they made sure that children and dogs move or stand at the same time. But they also checked how often the child and dog were less than a meter apart and how often the dog was oriented in the same direction as the child.

The Relationship Between Children and Dogs is Often Underestimated

Interesting for researchers: Dogs adapt their behavior to children in their families, but not as often as to their adult owners. “This suggests that while dogs see children as social companions, there are some differences that we need to better understand.

For example, there are studies showing that dogs can positively influence children. On the other hand, children are also at greater risk of dog bites than adults.

Knowing the research results, this may soon change: “We are finding that children are very good at training dogs and that dogs can take care of and learn from children.” Provide an important and positive learning experience for a much younger age. Because, according to scientists, “It can make a huge difference in the lives of both of you.”