With her bright blue eyes, her elegant body, and her loving, intelligent nature, she will quickly conquer your heart: Here you can find out what makes a Siamese cat and whether the breed suits you. 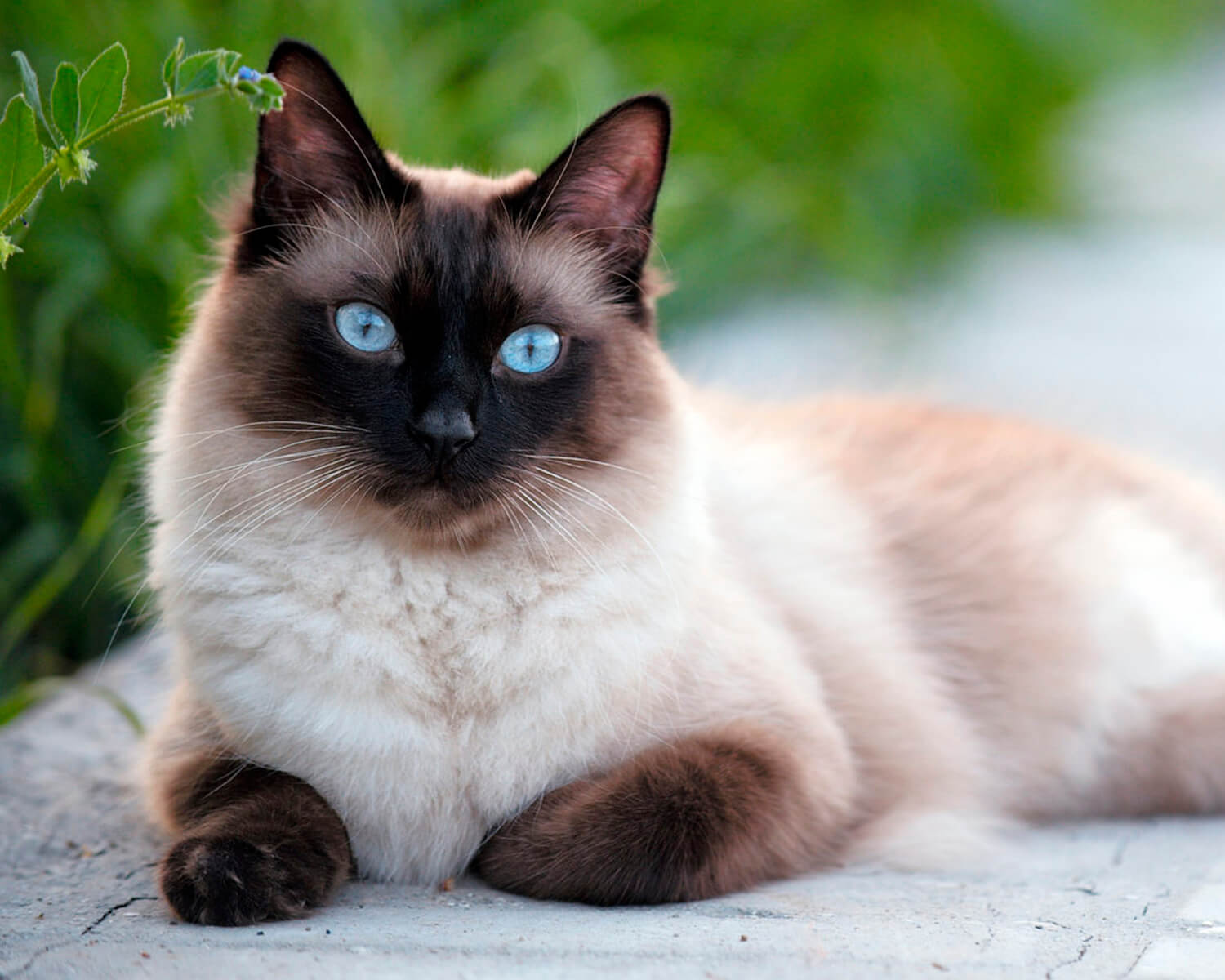 The paws are narrow, the legs long, the body slim: the Siamese cat is characterized by an elegant, medium-sized body. So it is not as stocky as the British Shorthair or the Persian cat. The rather pointed, wedge-like head shape is also characteristic of this breed.

Siamese also has significantly larger ears than many other cat breeds – but still in proportion to the rest of the body. The ears are broad and upright at the base. The deep blue eyes, which are slightly slanted and almond-shaped, are also particularly striking.

You can easily recognize this breed by its strikingly beautiful color. The Siamese cat is part albino. It is white to cream in color and has dark points on the face, ears, paws, and tail. It takes about nine months for the fur color to finally develop. There are more than 100 color variants, but recognized basic types are the following:

The top hair is short, fine, and lies close. The Siamese has hardly any undercoat. Cat owners should be pleased because the fur is very easy to care for.

Do Siamese Cats Have Hair?

The Siamese cat is suitable for many allergy sufferers. Because it loses comparatively little hair, on which allergy-triggering proteins from the cat’s saliva can spread around the room. But of course, that is not a guarantee. If you are unsure, you should test in advance at the animal shelter, with the breeder, or with friends how he will react to the animal. 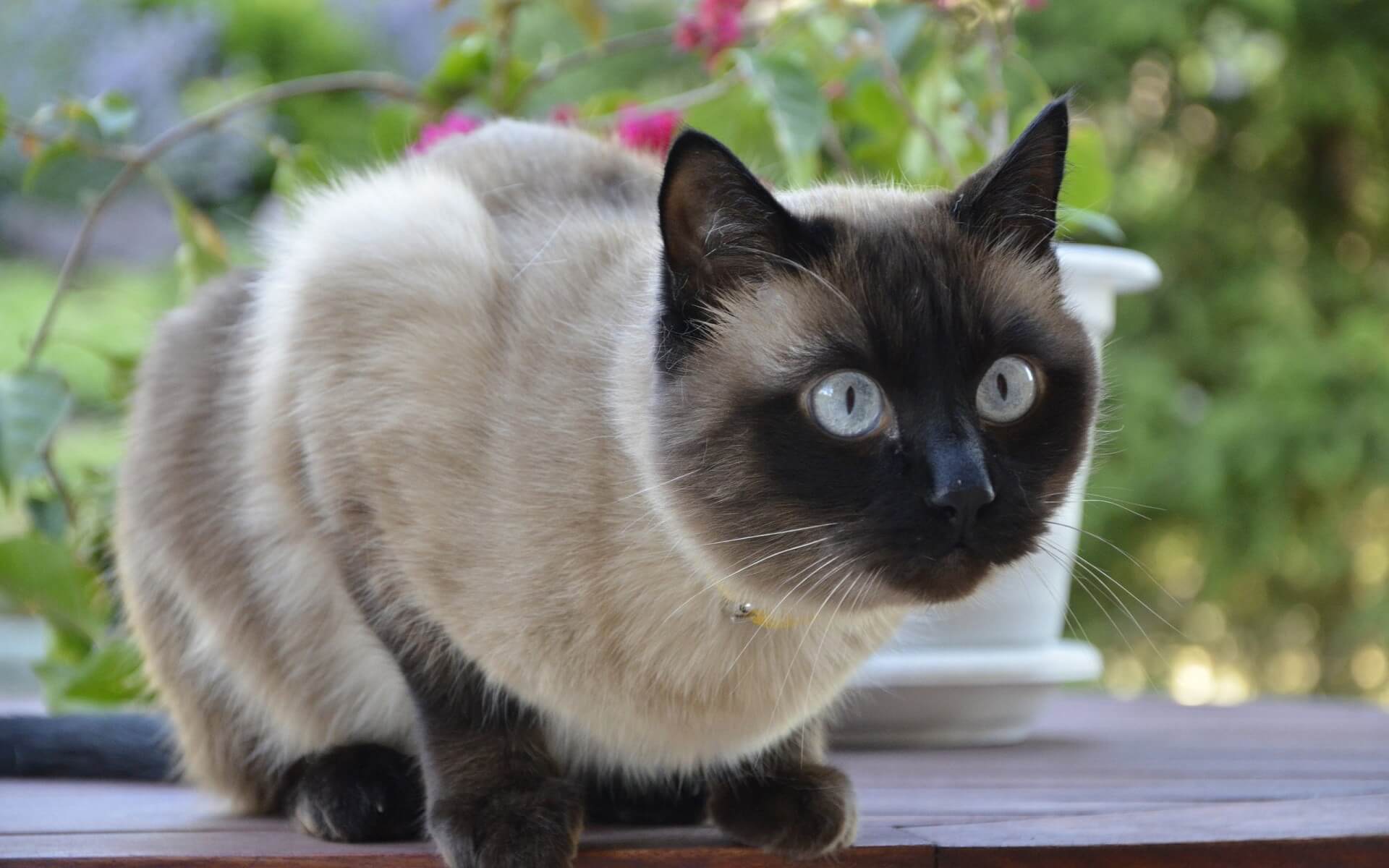 Origin and Development of the Siamese Cat

The origin of the Siamese shorthair cat is unknown but is believed to be in present-day Thailand. It could be descended from the temple cats of what was then Siam (the former name of Thailand). There, the animals were ascribed spiritual powers.

The first Siamese cats came to Europe at the end of the 19th century. They arrived in Great Britain as a souvenir from a consul general. The breeding pair (Pho and Mia) was a gift to his sister Lilian Jane Veley. These cats were shown together with their cubs at the first official cat show at Crystal Palace in London in 1885. Six years later, Lilian Jane Veley co-founded the Siamese Cat Club in the UK.

In the middle of the 20th century, the Siamese enjoyed increasing popularity among breeders. Soon leaner animals were preferred. Selective breeding resulted in narrower, more delicate cats. Originally, the Siamese was considered strong and muscular in Thailand.

By the 1980s, these cats had completely disappeared from exhibitions. Some breeders continued to breed the original form, ultimately creating two different breeds. So there is now a difference between Siamese and Thai cats:

The breed is considered headstrong, self-confident, and at times dominant. She knows how to get her own way. You will also quickly notice if she is currently not satisfied with something.

But the Siamese also clearly shows their love for their owner. It is very affectionate compared to many other house cats. It can happen that she follows you every step of the way through the apartment. Because of this, some even refer to them as “dog cats”. Further characteristics of the Siamese cat:

This being is the reason why the Siamese cat is used as a therapy animal for disabled children or dementia patients.

These cats are often highly intelligent and demanding animals. She even learns to fetch, walks on a leash and you can practice small agility tasks with her. This is also important because the breed wants to be kept busy.

The Siamese behaves like a young kitten into adulthood. Her curiosity and activity distinguish her among lovers. If the animal lacks activity, it usually looks for something itself – not always to the delight of its humans.

It is one of the more demanding breeds. Therefore, first-time cat owners should consider carefully whether they want to buy a velvet paw. In addition, they should deal intensively beforehand with the demands that the Siamese make on their owners. After all, they don’t want to feel overwhelmed with the spirited animal in the house.

As a rule, they are active, energetic animals. In addition, the Siamese is one of the most talkative and powerful-voiced representatives of the cat breeds.

Tip: The diet of the Siamese cat hardly differs from that of other breeds. You can give her high-quality wet or dry food and do her something good with fresh meat (beef or poultry). However, you should know that this breed is considered lazy to drink. So you should make sure that she absorbs enough fluids.

Lots of Space for Siamese

You can keep the Siamese outside, but it also feels at home in a large apartment with a balcony. Often, housing is even more suitable, because the breed is characterized by poor night vision and thin fur.

In the apartment, however, Siamese needs enough opportunities to work, play and climb. A large scratching post is part of the basic equipment.

Tip: The Siamese Shorthair cat is less nocturnal than other breeds. This is, among other things, Tapetum Lucidum, a layer behind or directly in the retina in the eye. It usually provides improved vision at dusk and at night but is less pronounced in the Siamese. Occasionally, this breed also has hearing difficulties.

Pay Attention to Your House Tiger

In relation to other cat breeds, the Siamese often demands the attention of its owner. Your sociability is very much appreciated by many owners. Nor does she like to be alone. So you should be able to devote a lot of time to the Siamese or keep them with other cats. However, you should make sure that the nature of the velvet paws fits together. 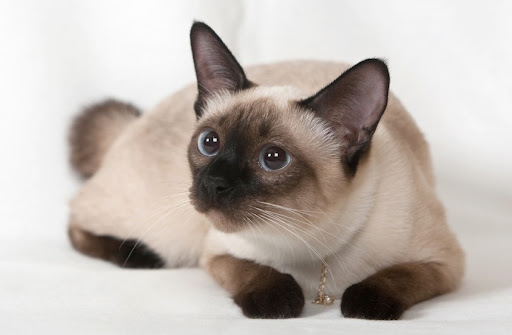 Like Burma, the Siamese cat’s fur has no undercoat, so it is rather easy to care for. You can remove loose hair by combing it once a week.

The Siamese usually have a long life expectancy. However, various hereditary diseases can occur, which can be ruled out through responsible breeding.

Tip: Make sure that you buy your Siamese cat from a responsible owner or a reputable breeder. Check the papers and see if the kitten was raised in a welfare-friendly environment.

Diseases that can be hereditary include:

There are also a number of behavioral disorders that can potentially be hereditary. This includes: