Their ancestors were widespread on earth. Today, the Seychelles giant tortoises only live on a few tiny islands in the Indian Ocean.

Seychelles giant tortoises belong to the class of reptiles. There they belong to the tortoise order and tortoise family. They have the typical physique of all tortoises: only the four legs, neck, and head protrude from under the mighty shell. The carapace is convex, wide, and darkly colored.

In the wild, male Seychelles tortoises are 100 to 120 centimeters long, some specimens even up to 150 centimeters. The females are slightly smaller and usually only reach 80 centimeters. Very large adult animals weigh up to 250 kilograms. The animals grow very quickly up to the age of about 40 years, after which they only increase in size very slowly.

Where do Seychelles giant tortoises live? 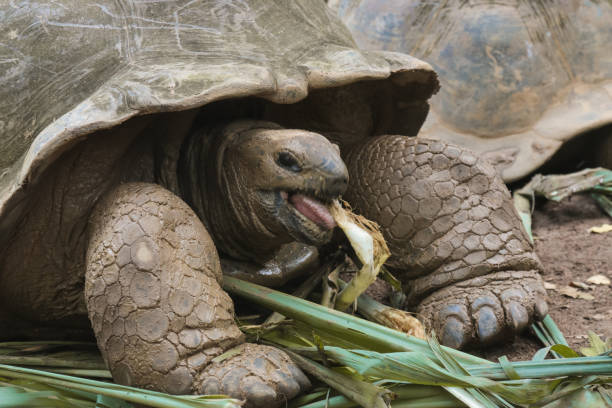 On the other islands, the animals have long since been exterminated because they were very popular with humans as food. Other Seychelles giant tortoises have been brought to other islands and live semi-wild there, others live in zoos. Seychelles’ giant tortoises reside in grasslands overgrown by scattered trees. They are purely soil dwellers.

What Seychelles giant tortoise species are there?

The tortoise family includes 39 different species. They are spread all over the world. Because turtles, like all reptiles, are cold-blooded animals, they only occur in warm climates. Of the giant tortoises, only two species have survived to our time: in addition to the Seychelles giant tortoise, this is the Galapagos giant tortoise, which only lives on the Galapagos Islands. These islands are located about 1000 kilometers west of South America in the Pacific Ocean.

How old do Seychelles giant tortoises get?

How do Seychelles giant tortoises live?

The ancestors of the Seychelles giant tortoises already lived on earth around 200 million years ago at the time of the dinosaurs. Since then, the life of the giants has changed little.

The diurnal animals are very slow. They run around at a maximum speed of one kilometer per hour and spend a lot of time eating grass and other plants. Because they cannot regulate their body temperature, they retreat to shady places in the midday heat to keep their bodies from overheating.

Since there are only a few trees that provide shade in Seychelles, many turtles crowd under trees or in rock niches. Sometimes they are even on top of each other. However, the animals have no closer relationship to each other but are loners. They don’t have fixed territories.

Seychelles giant tortoises are very peaceful giants. Quarrels between the animals hardly ever occur. In the evening the turtles sleep where they are. They don’t have any special places to sleep. Unlike other tortoise species, they don’t tuck their heads and legs under their shells when they sleep, otherwise, they won’t be able to breathe properly.

Friends and foes of the Seychelles giant tortoise

Adult Seychelles giant tortoises have few enemies in the wild. There are several reasons why they were almost wiped out: In earlier centuries, seafarers hunted them in large numbers because they live animals served on the ships as “meat supplies”.

When dogs, cats, rats, and pigs came to the islands with the European settlers, many eggs, and young animals fell victim to them. Goats became competitors for scarce plant food. It was also a long-standing custom on the Mascarene Islands to give each newborn girl a newly hatched turtle. This then grew up and was slaughtered at the girl’s wedding. However, this custom no longer exists today.

How do Seychelles giant tortoises reproduce?

Seychelles giant tortoises reproduce during the rainy season between November and April. During mating, the otherwise calm animals suddenly show temperament: the males become very excited and emit harsh, hoarse sounds that can be heard over a kilometer away. 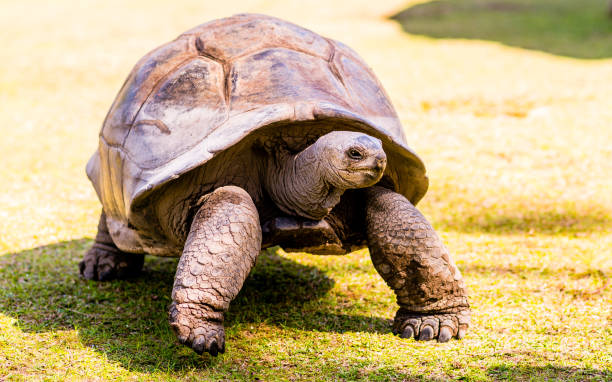 Between May and August, the females look for a suitable breeding ground and dig a hole in the ground with their hind legs. There they lay five to 25 eggs, which are about the size of a tennis ball. Then they shovel the nest back up with earth with their legs and guard it. After about 120 to 130 days, the baby turtles hatch.

Whether a female or male turtle hatches from an egg depends on the soil temperature: if it is relatively warm, females in particular hatch; if it is cooler, males in particular develop. At first the newly hatched young remain in their earthen nest. Then they dig their way to the surface of the earth. The boys are independent of the start. They only become sexually mature at the age of 20 to 30 years.

How do Seychelles giant tortoises communicate?

Seychelles giant tortoises hardly make any sounds. They only hiss when they feel threatened. And the males make loud noises when mating.

What do Seychelles giant tortoises eat?

Seychelles giant tortoises have an appetite for many things: They graze on grass, eat leaves and fruits, and do not stop at fish and carrion. A special “Turtle Lawn” has formed on the Aldabra Islands, consisting of over 20 species of plants. Due to grazing by the turtles, these plants have evolved over time.

Seychelles giant tortoises do not drink with their mouths but through their noses. This is an adaptation to the arid habitat. Because there are hardly any rivers or lakes here and rainwater seeps away immediately, the animals can absorb even the smallest amounts of water from cracks in the rocks through their nostrils.