The robbery tower snail is an adaptable carnivorous water snail that is not only visually interesting but also keeps the often undesirable mass population of other water snails at bay. A welcome help, with which you can do without snail poisons in the aquarium. 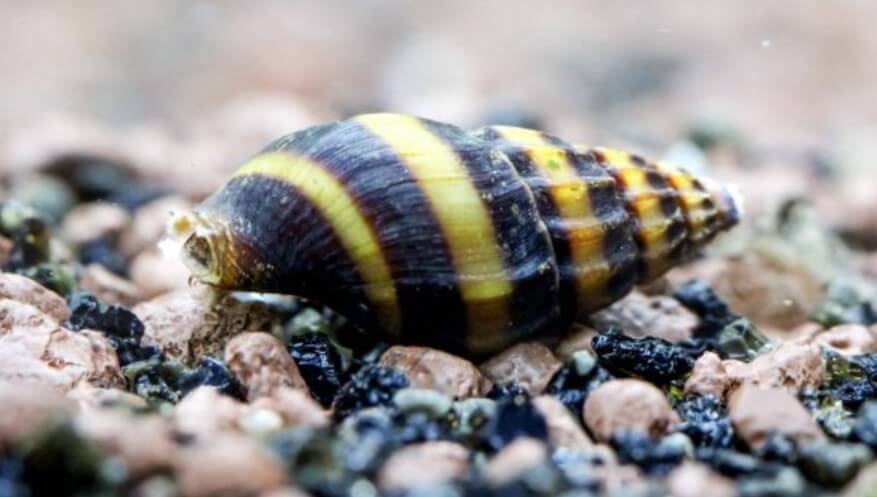 When fully grown, the predatory snail is almost 3 cm long. Males and females are of the same size and externally indistinguishable.

The striped snails live in Southeast Asia and are found in rivers, lakes, and ponds, as well as sewer channels.

It is best known in the dark brown and beige striped version. They are rarely found in a single color in beige or completely brown.

This cannot be seen from the outside.

The animals are designed as separate sexes. The male sits on the female and leads his sexual organ into the porus of the female. After a few days, the successfully fertilized female adheres small pillow-shaped clutches to a hard substrate (e.g. aquarium panes and stones). This pillow can contain one to three eggs. At an ambient temperature of 25 degrees, the fully developed snails, a few millimeters in size, hatch after approx. 4 weeks. If you get a full-grown female that has previously been fertilized, it is entirely possible that the individual animal will stick eggs together. Because with predatory snails – as with all other water snails – the females are able to store sperm.

The robbery tower snail is believed to be 3 years old.

First and foremost, Anentome sp. other water snails. You can also feed them with food tablets that have a high proportion of animal protein.

If you want to breed the robbery tower snail, you should own at least 5 animals. Then it is pretty certain that both sexes are represented among them.

You can keep a specimen well in an aquarium of 10 liters or more. If you want to breed them, the aquarium should contain at least 54 liters.

The predatory snail likes to bury itself in the sand, but also climbs around on stones and other furnishings. Snails cannot crawl backward. For this reason, the furnishings should be placed in such a way that they cannot jam.

Anentome sp. you can keep all fish and catfish together as long as they don’t eat snails. She eats other snails. It is unproblematic in terms of socialization.

The water should be between 18 and 28 degrees. A continuously high temperature shortens the life of the screw. It is very adaptable to the water. It lives in very soft to very hard water without any problems. The pH value can be between 6 and 8.5. 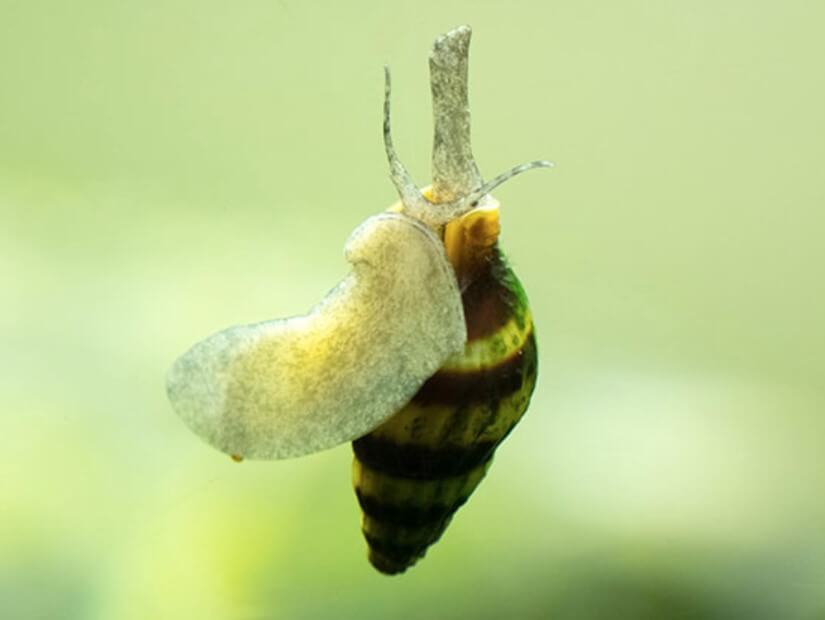 Her sipho, which she can stick out from under the house, is striking. With this, she locates her next meal. At the lower end of the mouth of the house, you can see the Siphokanal, through which the Sipho is stretched. This is part of the mantle that dresses the inside of the house.
She either lies down in the sand and waits or actively goes hunting. If she gets hold of her potential victim with her foot, she sticks her mouth under the house and injects her acidic saliva into the captured snail. This saliva breaks down their tissues.