Reindeer have a special feature: the females of these deer from the northernmost regions of the world also have powerful antlers.

Reindeer belong to the deer family and form the subfamily of reindeer. They are 130 to 220 centimeters long. The shoulder height is 80 to 150 centimeters. They weigh between 60 and 315 kilograms. The males are usually much larger and heavier than the females.

Their heads and trunks are quite long, and their legs are relatively high. Tail short, hooves wide. In contrast to all other deer, the female reindeer also have antlers. The males shed their antlers in the fall and the females in the spring. The antlers then grow back in both of them.

The bars are somewhat flattened. They are light in color and built asymmetrically. This distinguishes reindeer antlers from the antlers of all other deer. Overall, the antlers are very powerful in relation to the size of the animals. The males have a throat pouch on their neck that serves as a sound amplifier. The North American and Greenlandic subspecies have a long, white mane on the underside of their necks. Reindeer have thick fur that varies in color in summer and winter.

Where do reindeer live? 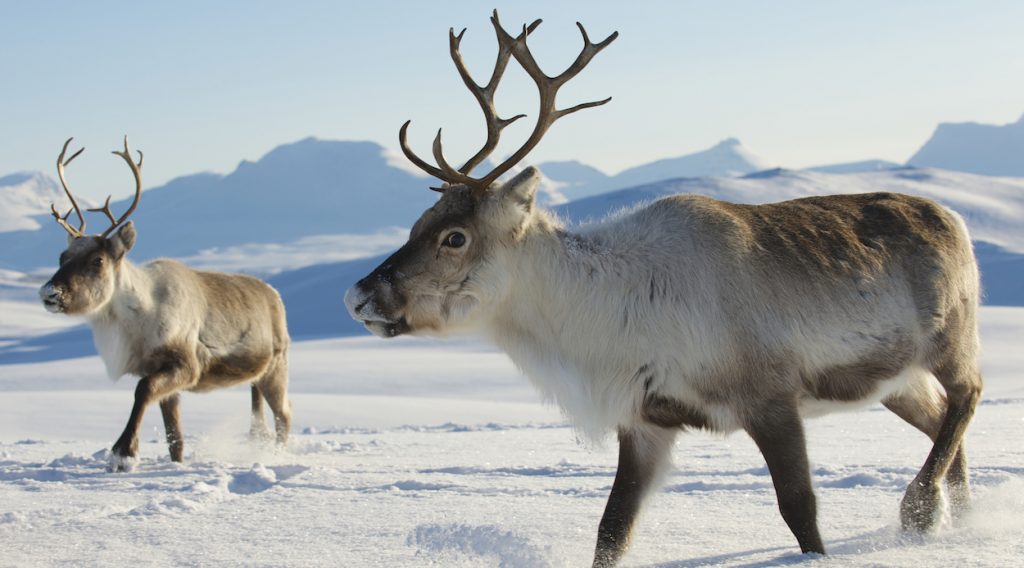 Reindeer live in the northernmost regions of Asia, Europe, and North America. There they inhabit the polar and subpolar regions.

Reindeer can be found in the tundra and taiga, i.e. in the northernmost forest regions.

What types of reindeer are there?

There are about 20 different subspecies of reindeer, but they are all very similar. These include the northern European reindeer, Svalbard reindeer, tundra reindeer, western forest reindeer or caribou, and barren-ground caribou.

They all differ mainly in size: the so-called forest reindeer, which mainly live in the forest, are usually larger than the tundra reindeer, which primarily inhabit the tundra. They usually have darker fur as well. The many different subspecies arose because reindeer live in such a large range. They have adapted to the respective very special environmental conditions.

In addition to the tame reindeer herds owned by the Sami, northern Europe still has wild reindeer: the largest herd of wild reindeer in Europe can be found on the so-called Hardangervidda, a plateau in southern Norway. This herd numbers around 10,000 animals. Otherwise, wild reindeer are very rare in Europe.

How old do reindeer get?

Reindeer live an average of 12 to 15 years. However, some animals reach an age of 20 years or live even longer.

How do reindeer live?

Reindeer live in large herds, which can number a few hundred animals – in extreme cases up to 40,000 animals in Canada. Because they live in a climate where there is snow and ice for many months, they have to migrate extensively throughout the year to find enough food.

Sometimes they cover distances of up to 1000 kilometers and also cross large rivers because reindeer are also good swimmers. Each herd is led by a leader.

But there is another very important reason for these migrations: In the summer, there are billions of mosquitoes in the homeland of the reindeer, especially in the damp, lower areas, which torment and prick the reindeer. The reindeer elude these pests by migrating to the mountainous regions in the summer, where there are fewer mosquitoes.

In order to withstand the intense cold of the Nordic winter, reindeer have much denser fur than other deer: Three times as much hair grows on a square centimeter of skin as on our deer. In addition, the hair is hollow and filled with air. The fur forms a perfect insulating layer. Typical of a herd of reindeer is the cracking noises made by the tendons in the ankles as they walk.

Reindeer can spread their hooves wide. In addition, there are insteps between the toes. This way the animals hardly sink in and can walk well in the snow or in soft, boggy ground. The antlers are used by the males to carry out ranking battles when they fight over the females during the mating season. It is not known why the females also have antlers.

Reindeer are the livelihood of the Sami of northern Scandinavia and many other peoples of northern Asia and North America. The Sami, for example, keep large herds of reindeer and roam the mountains and forests of northern Sweden, northern Norway, and Finland with these herds. They live on the flesh of these animals. In earlier times they used the skins for tents and clothing. The animals are also used as pack and draft animals.

Today, the herds are often spotted by helicopter and driven into the lower regions by the few reindeer herders that remain. Unlike North American caribou, northern European reindeer are tame and used to humans. 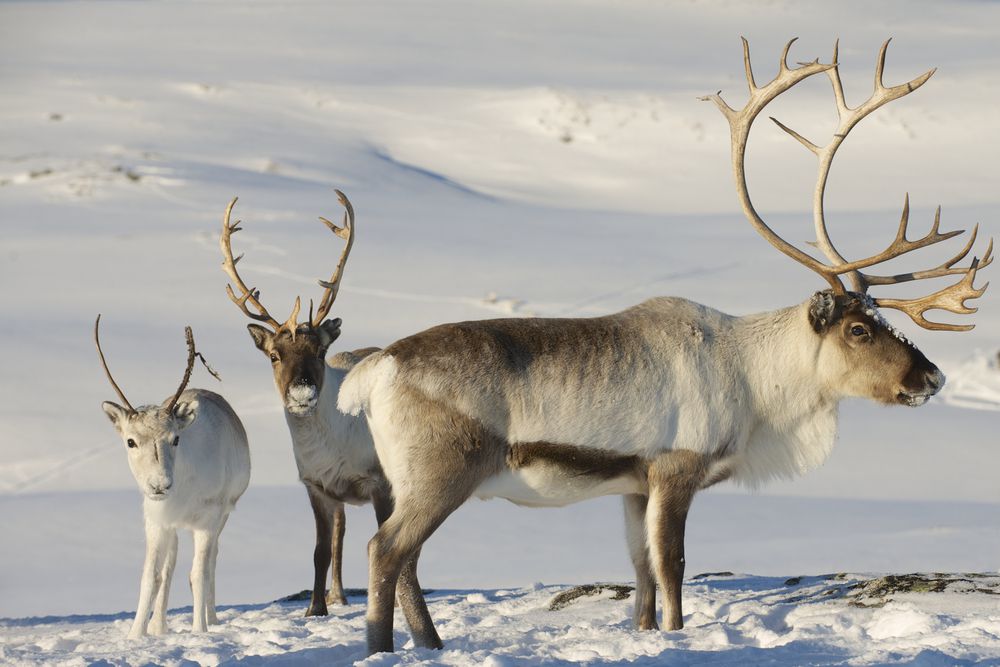 For us, reindeer are inextricably linked to the thought of Christmas: They are considered the draft animals of Santa Clause’s sleigh.

Friends and foes of the reindeer

Wolves and other predators such as wolverines, foxes, lynxes, and birds of prey can be particularly dangerous for young, sick, or old reindeer. But the biggest enemy is man, who has hunted these animals heavily, especially in North America.

How do reindeer breed?

Depending on the region, the rutting season is from August to early November. Then the reindeer males fight with their rivals and try to conquer as many females as possible.

A young is usually born 192 to 246 days after mating, around mid-May. Rarely there are two young. The earlier a calf is born, the better it can thrive: it then has more time to grow and grow big and strong until the onset of winter. The animals become sexually mature at about one and a half years.

How do reindeer communicate?

During the rutting season, the male reindeer make sounds ranging from organ-like to grunting.

What do reindeer eat?

The diet of the reindeer is meager: they mainly eat the reindeer moss, which still grows on the ground and rocks of the polar regions even in the coldest climates. The reindeer dig up these lichens with their hooves, even from the deepest snow. They also eat other lichens, grasses, and shrubs. This hard-to-digest food is initially only roughly chewed. Later, the animals regurgitate the food and chew it – similar to cows.