Its striking redhead clearly distinguishes the red-headed tetra from an aquarium crew. It is a popular aquarium fish for community aquariums and feels at home there. But it has some special requirements. In this portrait, you can find out more about this striking tetra. 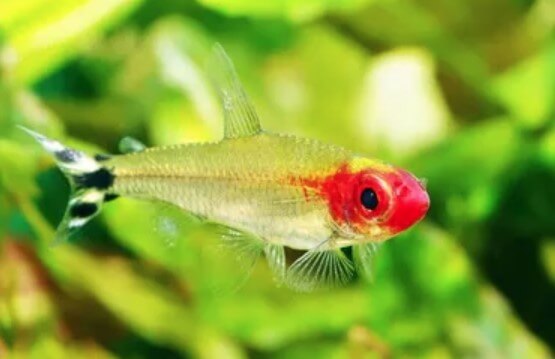 Interesting Facts About the Redhead Tetra

The red head tetra becomes about 6 cm long. The adult females are significantly fuller than the males.

Not only the red head color, which stretches slightly to the sides, but also the black and white striped caudal fin make this tetra almost unmistakable.

Colombia and northeastern Brazil are home to these fish.

The sexes can hardly be distinguished in younger specimens. Only when the fish have reached a length of about 5 cm can one distinguish the slimmer males from the fuller females. There are practically no differences in color.

Breeding the redhead tetra is not that easy. You set up a small aquarium (40 cm) with a thin layer of sand and a clump of fine-pinned plants (such as Java moss). The breeding water should be soft and slightly acidic, some of which should come from the previous keeping aquarium. The temperature is increased by about 2 ° C compared to normal temperature. The parent animals are removed after spawning, they are spawn predators. The young hatch after just under two days, but only start swimming after two to four days. Then they need the finest food such as paramecia, after about a week they can get Artemia nauplii. They grow up relatively quickly and then also take dry food.

Red-headed tetra can live up to eight years.

In its home waters, the red-headed tetra feeds mainly on small live food. In the aquarium, however, they are not very picky about what food they eat. Live or frozen food should be served once or twice a week, otherwise, they also take good dry food.

Red-headed tetra loves the company of their own kind. That is why they should only be kept in a group of at least eight to ten specimens, and more in larger aquariums.

The aquarium for a group of redhead tetra should have at least 112 liters. Even a standard aquarium with the dimensions 80 x 35 x 40 is sufficient.

A dark substrate makes the colors of the redhead tetra appear stronger. A varied interior with roots and a relatively large number of plants ensures that the fish feel comfortable. There should be enough swimming space at one point in the front area.

Red-headed tetra can be kept together with much other peaceful fish of almost the same size. These include numerous tetra such as the red neon, but also armored catfish and dwarf cichlids. In the presence of other large fish, such as angelfish, they can feel uncomfortable and jumpy.

The temperature should be between 24 and 28 ° C, the pH value between 5-7. The water should not be too hard and as slightly acidic as possible, then the red tones are stronger.