Koi carp have always fascinated us with their splendor of color and beauty. After we presented the most famous of all cultivated forms in another post, we want to turn to color variants that are less common. Find out here what makes rare koi carp so special.

There are around 200 color variants, some of which only differ in subtle nuances. In order to bring order into the whole color system, one orientates oneself on a division into 13 upper classes. The most popular of these variants are the big three (Kohaku, Sanke, and Showa). In addition, Bekko, Utsu Rimono, Asagi, and, last but not least, Kawarimono, Goshiki, and the glittering Kinginrin. We would like to present the remaining four variants and an additional three rare koi carp here. 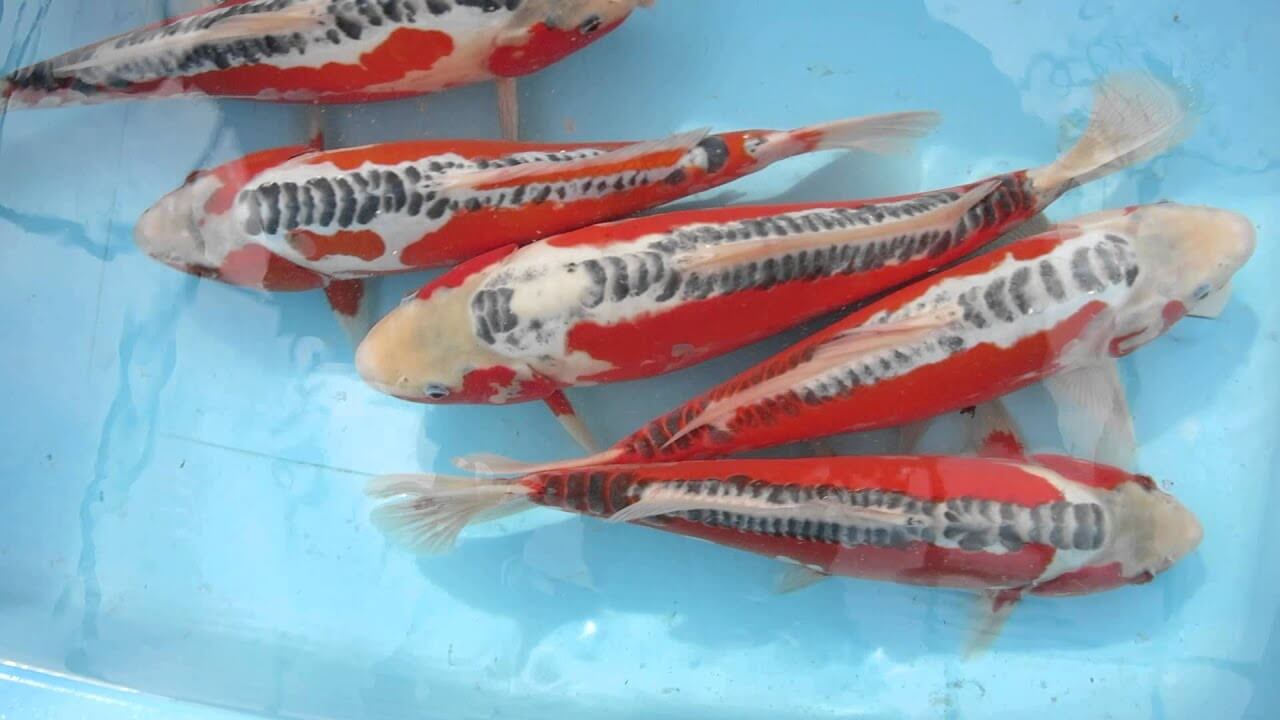 In order to explain the origin of the Shusui a little, we first make a detour to its ancestors, the Asagi. Asagi is very popular and can often be found among breeders and hobbyists. As one of the oldest color varieties, the Asagi was crossed with many other species to produce new color varieties. Some of the best-known agreements are those from crossing with German mirror carp, the Doitsu (= Japanese for German). These Koi have been specifically bred since around 1910 and have a typical feature of German fish: a peculiarity in their scaling. These koi have little or no scales.

While with most unscaled Koi the Doitsu is simply placed in front of the actual coloring, e.g. Doitsu Hariwake, the Doitsu Asagi has a special name: Shusui. This cultivated form of the Asagi is practical without scales. Only to the left and right of the dorsal fin do two symmetrical rows of scales extend from the head to the tail. The scaling should be continuous and even. The color scheme is similar to that of the Asagi: There are red and blue Shusui. Both color variants have a light head and a clearly defined white stripe between the stomach and back. They also share the red belly area and the dark blue back scales. The only difference is that the blue Shusui also has a basic blue color on the back, not just individual scales like the red Shusui.

Asagi Junction No. 2: The Koromo 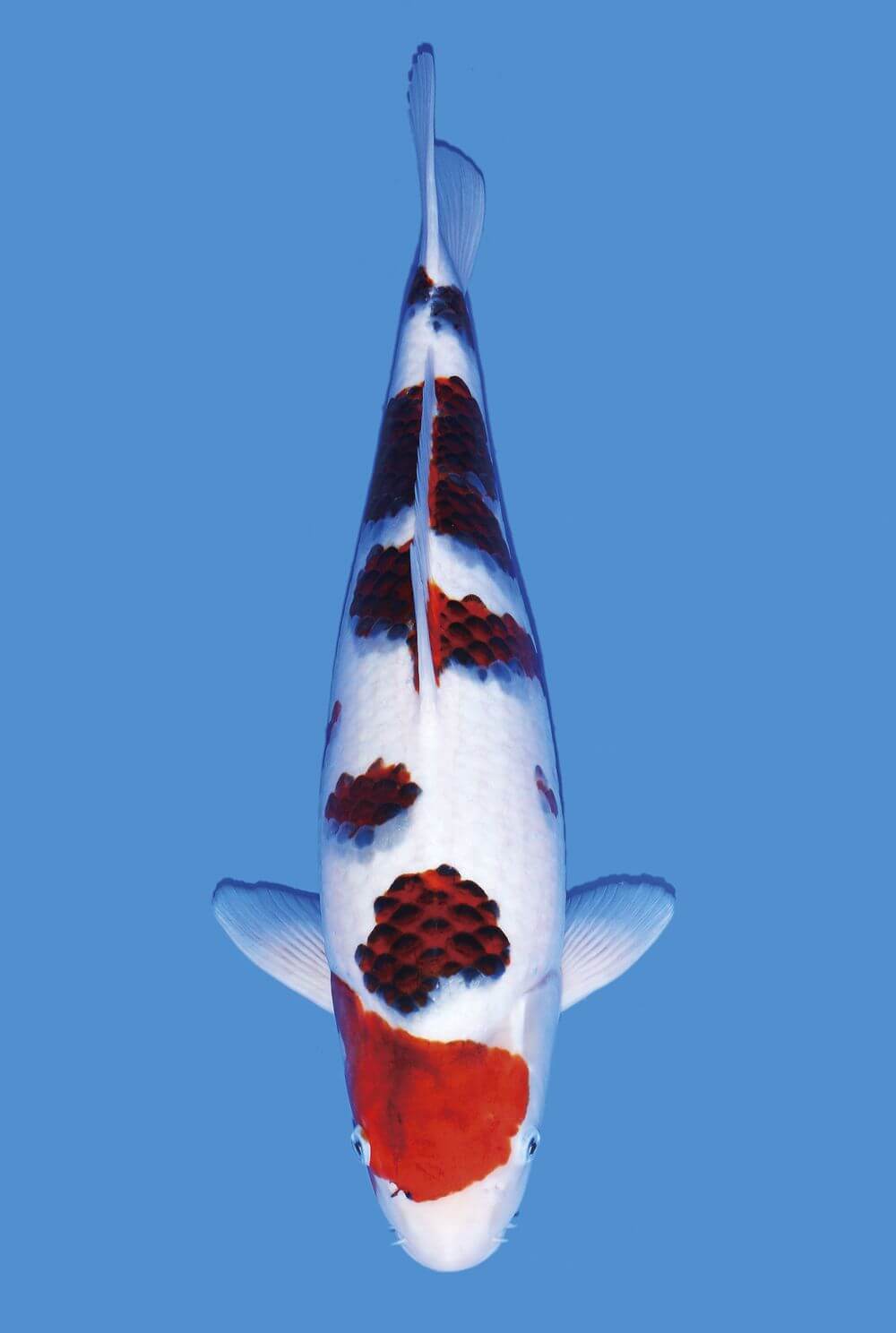 This color variant is also the result of an Asagi crossing, but the widespread Kohaku was crossed here. Similar to the Kohaku, the Koromo is characterized by a red drawing on a white background. In addition, it has blue or black scale edges that look like a net-like coating. Interesting: While the upper group of this color variant is written with a K, the individual subspecies begin with a G.

The most common is the Ai Goromo (ai = Japanese for deep blue), the pattern of which is evenly underlaid with a blue/red net: The scales are reminiscent of pine cones, but only in the red areas. It is also assumed that the head does not show any color inclusions.

Less often, on the other hand, one finds the Sumi Goromo (Sumi = Japanese for black), a white Koi with red Kohaku markings that are clearly overlaid with black. Often the black is so strong that you can only guess the red markings and the Koi looks more like a Shiro Utsuri.

The rarest of the Goromo is the Budo Goromo (budo = Japanese for grapes), which is slightly purple in color. Basically, this Goromo has pure white skin, which is covered by grape-colored spots: This coloration comes about through the superimposition of the black scales.

The Hikari: The group of metallic koi
As the name suggests (Hikari = Japanese for shiny), these are shiny metallic Koi, which can be roughly divided into three groups. The first group, the Hikari Mujimono, includes all monochrome, shiny metallic Koi (Muji = Japanese for monochrome). There is also the name Hikari Moyo, which applies to all two or more colored Koi that have a metallic shimmer. Last but not least, there is the third group, the Hikari Utsuri, which includes all carp that result from a cross between Utsuri and Hikari Muji and combines the properties of both color variants.

Tancho: The Crowned One 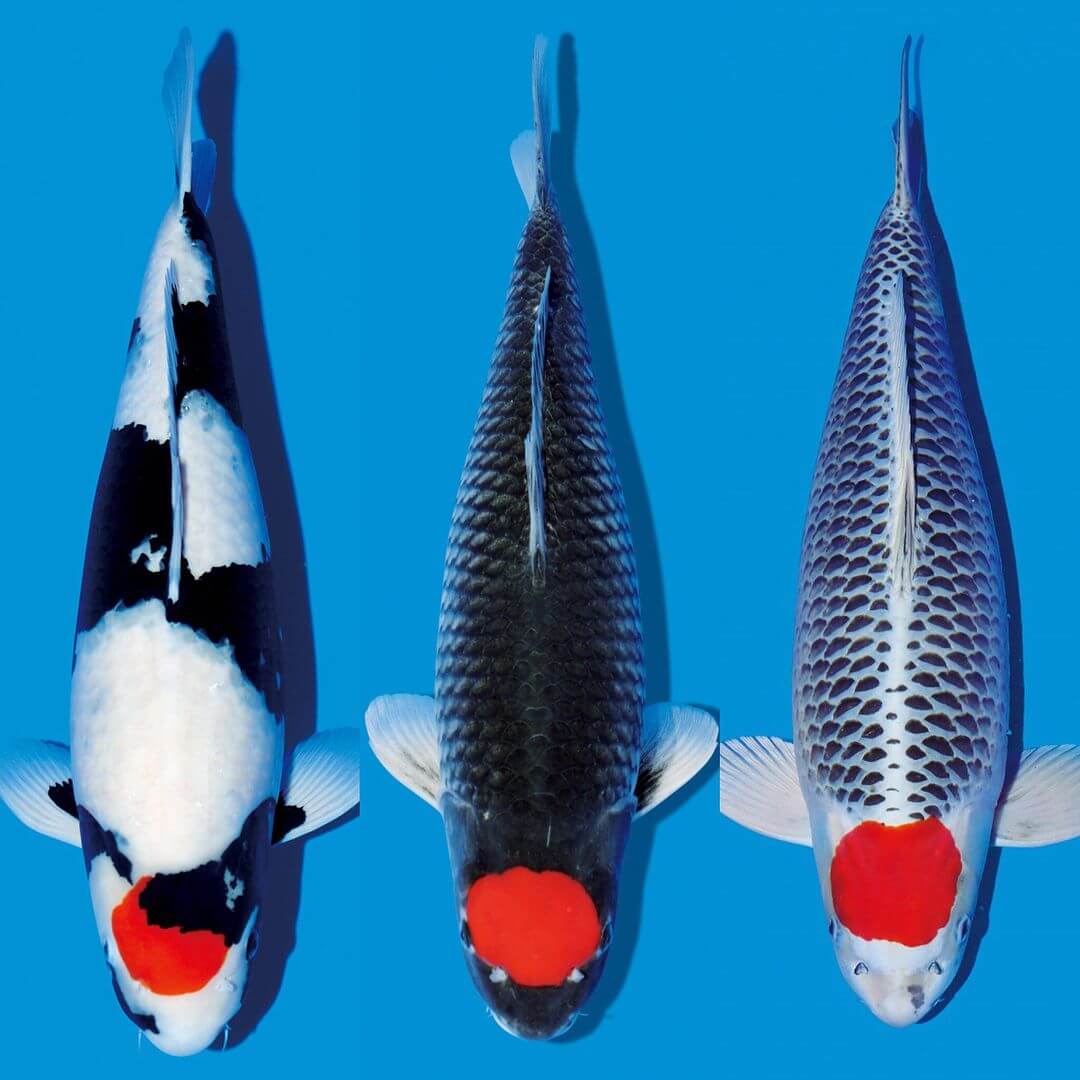 The name Tancho is made up of the Japanese words tan (= Japanese for red) and Cho (= Japanese for to be crowned): Tancho describes all colors that have no red apart from a red spot on the head. The spot should be as round as possible, but oval, heart-shaped or square shapes are also allowed: It is only important that the spot is as centrally located between the eyes as possible. There are many color variants that can have a tancho spot, for example, the Tancho Sanke (white Koi with a red point on the forehead and black spots on the body) or the Tancho Kohaku (white Koi with a red point on the forehead), which is particularly valuable because it is attached to the national flag of Japan reminds. 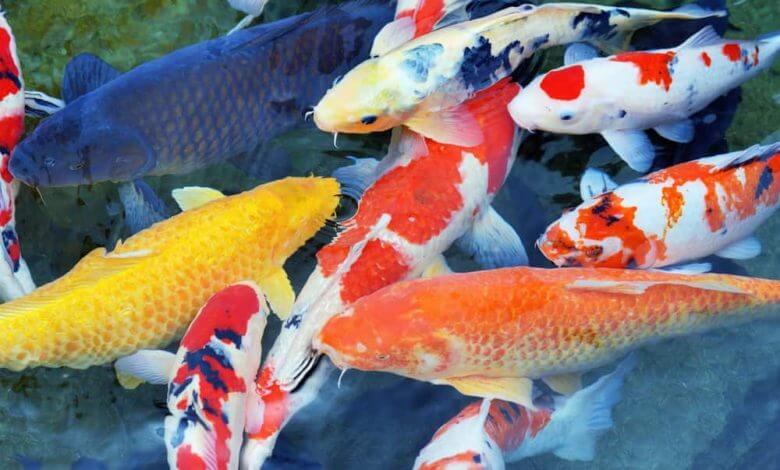 Last but not least, we now want to turn to some special forms, some of which are often found, some of which are less common. We want to start here with the kage, which in Japanese can mean something like a phantom, deep shadow, or raven. This is the name given to carp that have individual black scales in the white or red basic color, which together result in a reticulate, diverging black pattern. Here, too, the name of the color variant is put in front, for example, Kage Showa or Kage Shiro Utsuri.

Another special color can be found in the Kanoko, which means fawn or fawn brown. These Koi have individual, freckle-sized, mostly red scales that are evenly distributed over white areas of the body. These scales are reminiscent of the points on a fawn’s fur, hence the name. This coloring is relatively rare, and it can also happen that the fish loses its Kanoko markings over time.

The last rare koi carp species does not differ in its color, but in its shape: The butterfly koi, also known as the Hirenaga, dragon, or long-fin koi, have fins and barbels that are significantly elongated. In the USA these fish are very popular, less so in other parts of the world. This may be due to the fact that there is an ongoing discussion as to whether this koi shape should be one of the torture breeds, as they swim much more heavily than “normal” koi.