Pythons include some of the largest constrictors in Africa and Asia. They don’t have poisonous fangs, but rather entangle and crush their prey.

The python family includes relatively small species from the southern python genus, which only reach a length of up to 90 centimeters, to species of the actual python genus, some of which are very large. An example is a Burmese python, which grows to over five meters long. This means that some of the longest snakes in the world belong to the pythons.

The python’s body consists of a powerful muscular tube. The head is quite broad and clearly separated from the body, the snout is rounded. The tail is only short. The whole body is covered with small scales, the head with smaller scales and larger shields. Depending on the species, the coloring is light or dark brown, olive, grey, orange, or yellow. The animals wear different patterns of dark-edged spots, bands, and stripes.

Your lower jaw is very flexible, and the bones of your upper jaw are very mobile. This allows pythons to open their mouths extremely wide to swallow their prey. Pythons have a special feature that distinguishes them from other snakes: In their body, there are still remains of the pelvis and thigh bones in the form of spurs.

Where do pythons live? 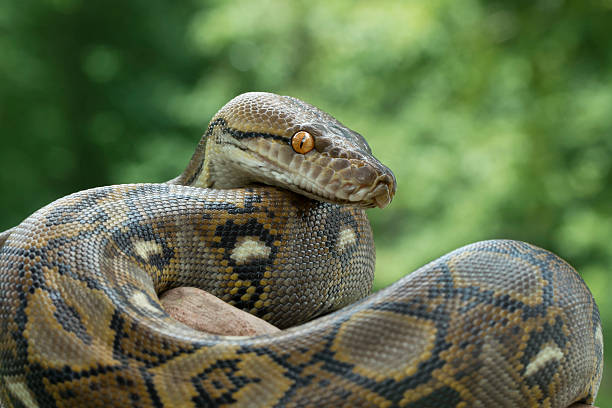 Pythons inhabit different habitats depending on the species. This includes savannas, rainforests, coasts, mangroves, but also semi-deserts. Some species occur up to 2000 meters above sea level. Rock pythons mainly live in open savannahs, usually near bodies of water. Some of them are also found in plantations. They stay mostly on the ground. Other species also live on trees. Pythons sometimes use the burrows of other animals as a retreat, such as the burrows of aardvarks, warthogs, and porcupines.

What species of python are there?

The python family includes eight genera with 40 different species. One of these genera is that of the actual pythons, often just called pythons. It includes species commonly known as pythons such as Burmese python, ball python, tree python, southern rock python, and northern rock python.

The reticulated python and the Timor python also used to belong to the actual pythons. Researchers have since established that they form a separate group. They are now part of the genus Malyopython, but of course also part of the python family.

How old do pythons get?

How do pythons live?

Pythons aren’t venomous snakes, they’re constrictors. They kill their prey by grabbing them with one bite and then entangling and crushing them. Most pythons are active at dusk and at night, but some, like the southern rock python, are also active during the day. The activity also depends strongly on the temperature. In the cooler season, the animals are more active during the day, and more at night when it is very hot.

Pythons not only live on the ground but also in trees. They are very skilled climbers and good swimmers. In search of food, pythons either wander around or lie in wait for prey, well hidden in the branches of trees or on the banks of the water.

Like all reptiles, pythons are cold-blooded, their body temperature depends on the temperature of the environment. The animals, therefore, like to sunbathe in the morning to warm up. Like all snakes, pythons shed their skin as they grow. In doing so, they shed their old skin, which is sometimes found as an empty shell.

Friends and foes of the python

Young pythons can fall victim to birds of prey or other predators such as crocodiles, monitor lizards, or big cats. Adult animals are vulnerable to predators such as hyenas when they have just swallowed prey and are very immobile. Warthogs also attack pythons when they want to protect their young.

How do pythons reproduce?

Pythons reproduce by laying eggs. During the mating season, the females leave scent trails that the males can use to track them down. After mating, the eggs remain in the female’s body. This gestation period varies in length. Finally, depending on the species, the female lays between two and more than 100 eggs. Pythons practice regular brood care: the female curls around the clutch to protect the eggs and keep them warm. Eventually, the little snakes hatch. The mother and young often stay close to the nest for a while. 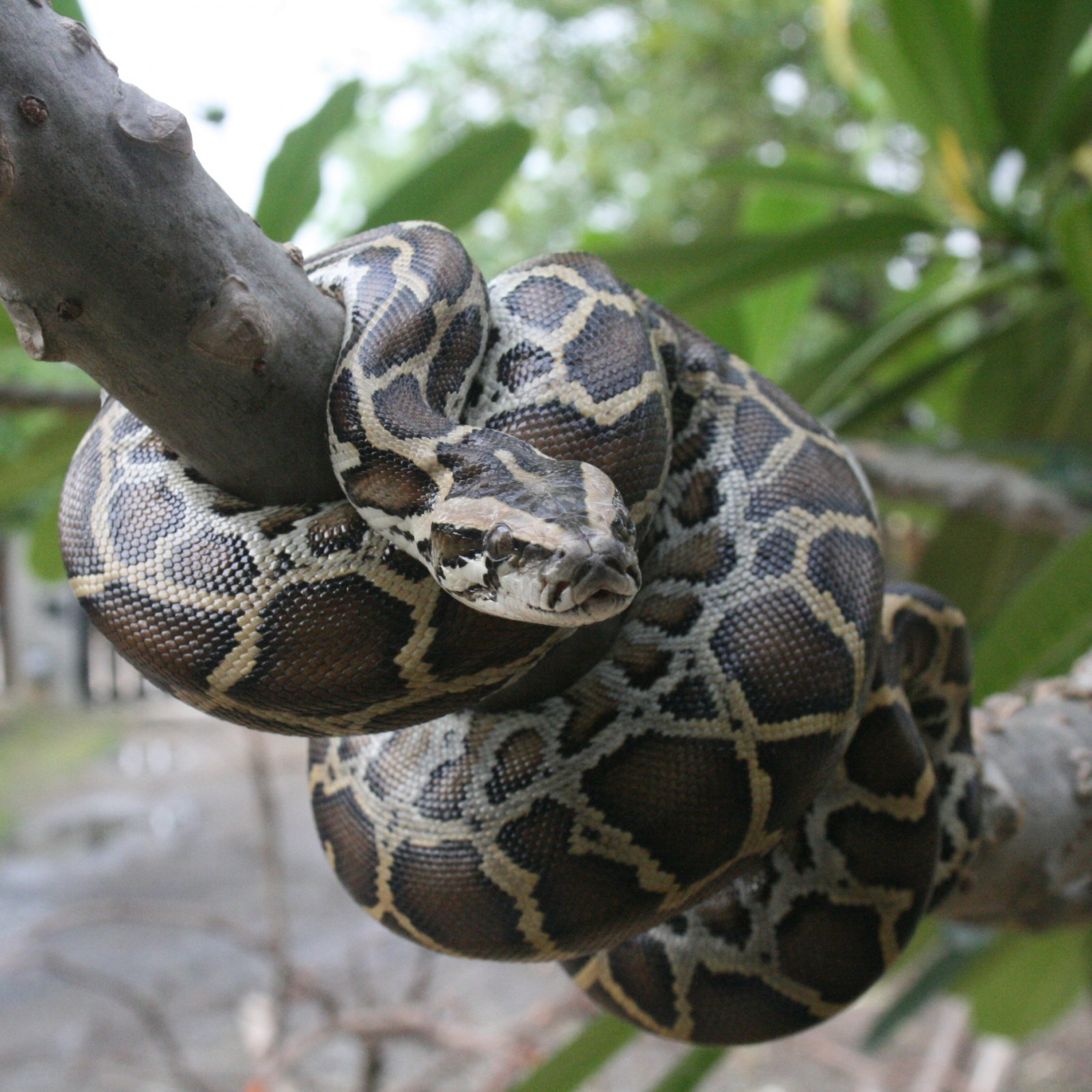 Young pythons grow rapidly for the first few years. But it takes a few years until they are sexually mature: in the case of the southern rock python, for example, it takes a little over two to six years in captivity and up to ten years in the wild.

How do pythons hunt?

Pythons usually hunt at night. With the help of their so-called pit organ, they can perceive infrared rays. So they feel the heat that prey animals radiate over their bodies. The pit organ is located on the left and right of the upper jaw between the eyes and nostrils and can be recognized as a small indentation

What Do Pythons Eat?

Pythons primarily hunt small to medium-sized vertebrates, i.e. mammals and birds, and sometimes other reptiles as well. Prey sizes vary from mice and small birds to small antelope. Large pythons can eat prey weighing up to 25 kilograms. They swallow the prey whole, usually head first, and then digest it over the following days. Devouring the prey can take several hours.