Prairie dogs have nothing to do with dogs – they are rodents and not predators. But because they can bark, Canadian trappers have dubbed them “prairie dogs.”

At first glance, prairie dogs might look like marmots, but they’re half the size and much slimmer than their mountain relatives. Prairie dogs are rodents and belong to the squirrel family, i.e. to the same animal group as ground squirrels, squirrels, and marmots.

Prairie dogs are 28 to 35 centimeters long, have a tail that measures three to ten centimeters, and weighs 700 to 1400 grams. Their fur is yellowish-grey to brown and mottled with dark. Their belly and throat are slightly lighter.

Where do prairie dogs live?

What types of prairie dogs are there? 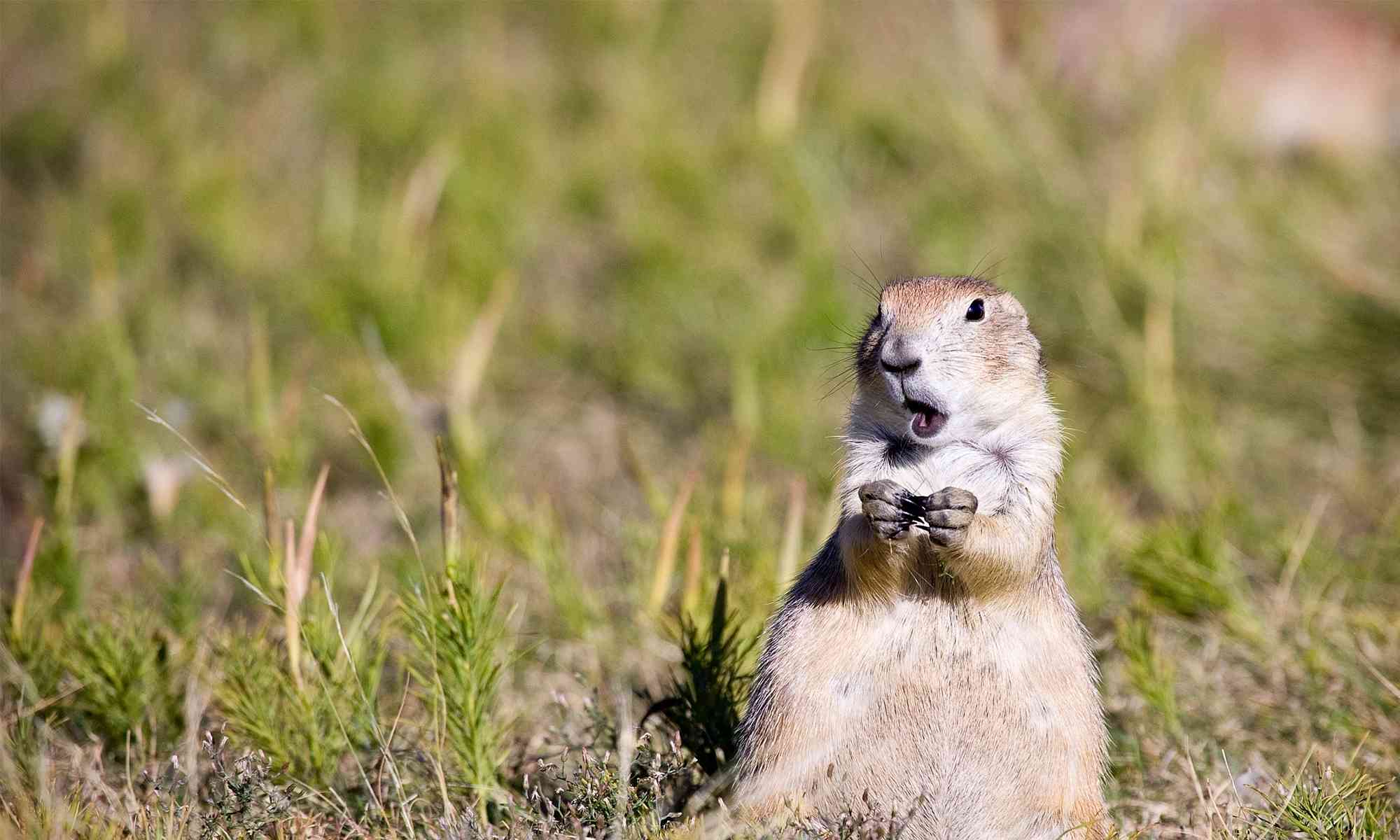 How old does a prairie dog get?

How do prairie dogs live?

Prairie dogs are famous for building real “cities”: They live with many thousands of animals in a complex system of underground burrows and passages that reach five to meters deep into the ground. That’s why the ground on the prairie can be punctured like cheese. The largest prairie dog colony is said to have been 65,000 square kilometers – that’s an area the size of the Free State of Bavaria.

Millions of prairie dogs probably lived there in the past. These passages and caves are indispensable for the prairie dogs: They are the only refuge from predators and birds of prey in the vast, open landscape and offer shelter to animals from the snow and cold in winter. A prairie dog colony consists of many small family groups. A prairie dog family usually consists of one male, up to four females, and their young.

There is a strictly regulated hierarchy within the family. When the individual family members return to their burrow, they greet each other with a so-called “kiss of recognition”. Prairie dogs also enjoy playing with each other, grooming each other, and helping each other with the cubs. Prairie dogs are good neighbors. The individual family groups get along well and take care of each other: on the up to 60 centimeters high mounds of earth that are created when the burrows are dug, some prairie dogs stand erect and keep vigilant watch.

When they spot an enemy, they let out a barking cry. In this way, they warn the whole colony and the animals can flee underground in time. The mounds of earth in front of the building also ensure that the passages and caves are not flooded in heavy rain. When the icy wind whistles across the prairie plains in winter, the prairie dogs retreat to their dens, well lined with grass and leaves, and sleep away the cold season.

Friends and foes of the prairie dog 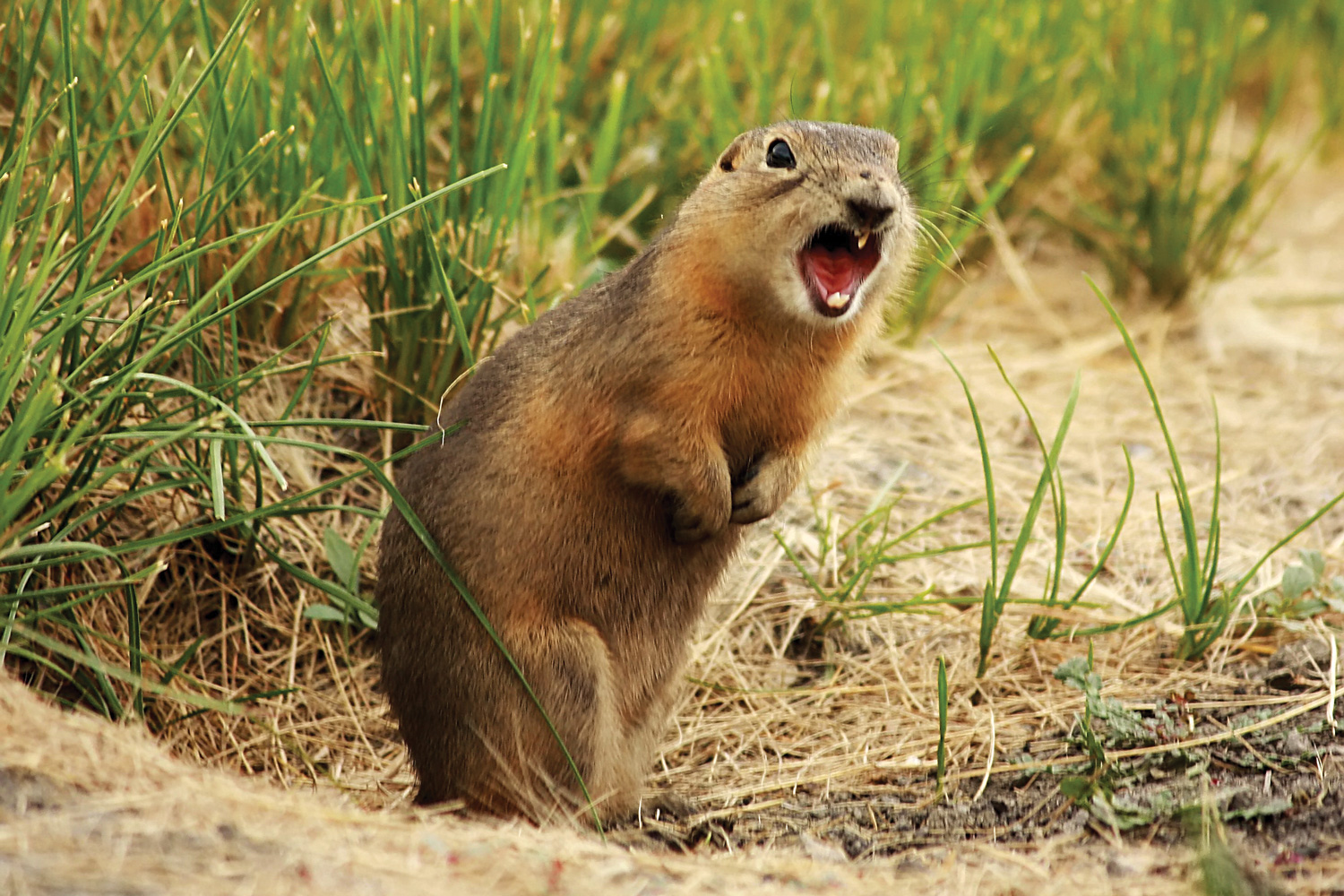 Birds of prey, snakes, foxes, coyotes, prairie owls, and black-footed polecats are particularly dangerous to the prairie dogs. However, their greatest enemy is man: Because the many holes in the prairie soil were a danger to the grazing herds of cattle and also interfered with the cultivation of the fields, many prairie dogs were killed by farmers with poison and gas.

How do prairie dogs reproduce?

In the spring, after a gestation period of 30 days, the females usually give birth to three to five, but sometimes eight young. They weigh only 15 grams, are still naked, blind and deaf. They are suckled by their mother for almost two months; after five to six weeks they make their first trips out of the burrow. The cubs stay with their family for about two years until they are adults. Then the male animals are driven away by their father and look for their own territory. The females stay with their family a little longer before starting a new family with a male.

How do prairie dogs communicate?

In addition to the warning call, which sounds like a dog barking, the prairie dogs communicate with each other with other calls and whistles. For example, there is a territorial call, which the animals use to show that a certain place belongs to their residential area.