One of the most popular threadfish is the blue threadfish. Like all threadfish, a blue threadfish has greatly elongated, thread-like pelvic fins that are almost always in motion. As a foam nest builder, it also shows fascinating reproductive behavior. 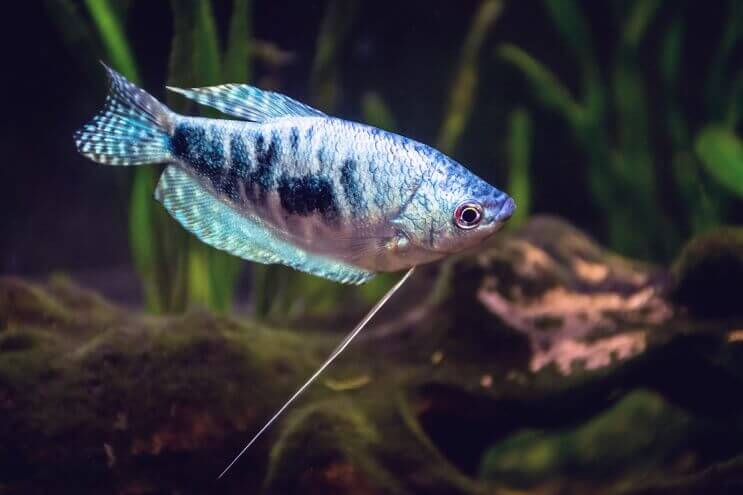 Interesting facts about the blue threadfish

In the aquarium a blue threadfish can reach up to 11 cm, rarely a little more in very large aquariums (up to 13 cm).

The natural form of the blue threadfish is metallic blue on the whole body and on the fins, with every second to the third scale at the rear edge being set off in dark blue, which results in a fine vertical stripe pattern. On the middle of the body and on the tail stalk, two dark blue to black spots, about the size of an eye, can be seen, a third, more indistinct, is located on the back of the head above the gill covers.

In the more than 80 years of breeding in the aquarium, numerous cultivated forms have emerged. The best known of these is certainly the so-called Cosby variant. This is characterized by the fact that the blue stripes are enlarged into spots that give the fish a marbled appearance. The golden version has also been around for around 50 years, with both the two clear dots and the Cosby pattern. Only a little later, a silver shape was created without the side markings (neither dots nor spots), which is traded as opal gourami. In breeding circles, crosses between all these variants appear again and again.

The exact home of the blue threadfish is difficult to determine today. Because it is – despite its relatively small size – a popular food fish. The Mekong Basin in Southeast Asia (Laos, Thailand, Cambodia, Vietnam) and possibly Indonesia are considered to be the actual home. Some populations, such as those in Brazil, also come from aquariums.

The sexes can be distinguished from a length of 6 cm. The dorsal fin of the males is pointed, that of the females is always rounded.

The blue gourami builds a foam nest up to 15 cm in diameter out of salivated air bubbles and defends this against intruders. Male competitors can be driven away very violently in aquariums that are too small. For breeding, the water temperature should be raised to 30-32 ° C. Spawning takes place with the typical labyrinth fish looping under the foam nest. From up to 2,000 eggs the young hatch after about a day, after a further two days, they swim freely and need infusoria as their first food, but after a week they already eat Artemia nauplii. If you want to breed specifically, you should raise the young separately.

If the conditions are good, a blue threadfish can reach an age of ten years or even a little more.

Since the blue threadfish are omnivores, their diet is very light. Dry food (flakes, granules) is sufficient. Occasional offerings of frozen or live food (such as water fleas) are gladly accepted.

In aquariums below 160 l, only one pair or one male should be kept with two females, as the males can violently attack conspecifics when defending foam nests.

In nature, areas with dense vegetation are often populated. Only a small part of the surface needs to remain free for the foam nest construction. Denser plant areas serve the females as a retreat if the males push too hard. However, there must be free space above the water surface so that the fish can come to the surface at any time to breathe. Otherwise, as labyrinth fish, they can drown.

Even if the males can get brutal in the area of ​​their foam nest, socialization is quite possible. Fish in the middle water areas are hardly taken into account, those in the lower ones are ignored at all. Fast fish like barbels and tetras are not at risk anyway. 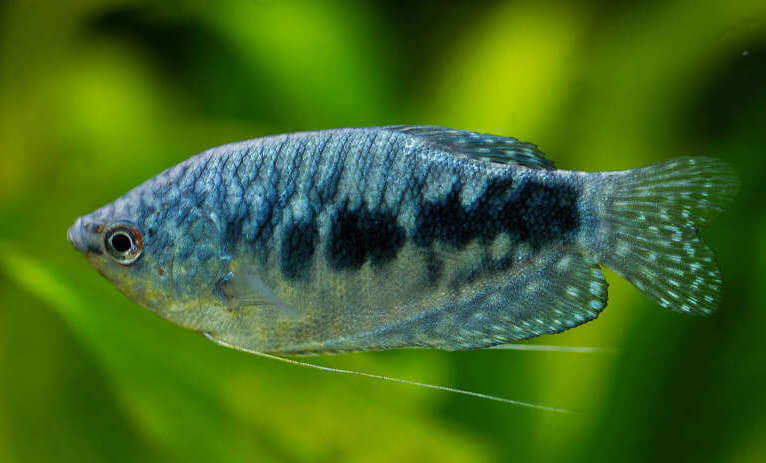 The temperature should be between 24 and 28 ° C, low temperatures of 18 ° C or more do not harm the fish for a short period of time, it should be 30-32 ° C for breeding. The pH value can be between 6 and 8. The hardness is irrelevant, both soft and hard water are well tolerated.