The diagnosis of plague causes panic in many dog ​​owners. And not without reason: a dog’s illness usually ends in death. Fortunately, there is a canine plague vaccine. Here you can find out what to look for besides the disease.

Distemper is caused by the canine distemper virus, which, incidentally, is closely related to the measles virus in humans. But for humans it is harmless.

Plague is often fatal, especially in puppies. And even if dogs do survive the disease, they usually suffer the consequences for their lives.

The good news is that you can get your dog vaccinated against the plague – more on that at the end of this article. Thanks to vaccination, distemper occurs much less frequently.

However, there are now more cases of congestion in Europe, including in dogs. Why? One of the explanations may be dog owners’ vaccination fatigue. But foxes, martens, and raccoons as reservoirs of the virus, as well as the rapidly growing illegal trade in puppies, in which dogs from abroad are often not vaccinated or already infected with the plague, are growing.

Contents show
1 How Does Distemper Develop in Dogs?
2 How to Recognize Plague in Dogs
3 Tips for Dog Owners

How Does Distemper Develop in Dogs?

Dogs often infect each other by coughing or sneezing, or by sharing things such as bowls for water and food. Dogs can also become infected with the canine distemper virus through contact with the feces, urine, or eye secretions of infected animals. Pregnant females can infect their puppies.

There is also a risk of infection from wild animals. Plague can also develop in badgers, martens, foxes, ferrets, weasels, otters, wolves, and raccoons. Infected foxes, martens, or raccoons are especially dangerous to dogs, as these animals are increasingly found around cities and residential areas. Dogs that have not been vaccinated against distemper can catch the canine distemper virus from wild animals in the area or while walking in the woods.

How to Recognize Plague in Dogs

There are different forms of dog plague. Accordingly, the symptoms can also be different. First of all, all forms of plague are manifested by loss of appetite, lethargy, high fever, nasal and eye discharge.

After that, depending on the form, the following symptoms are possible:

In particular, the nervous form of the distemper leads to the death or euthanasia of the animal. 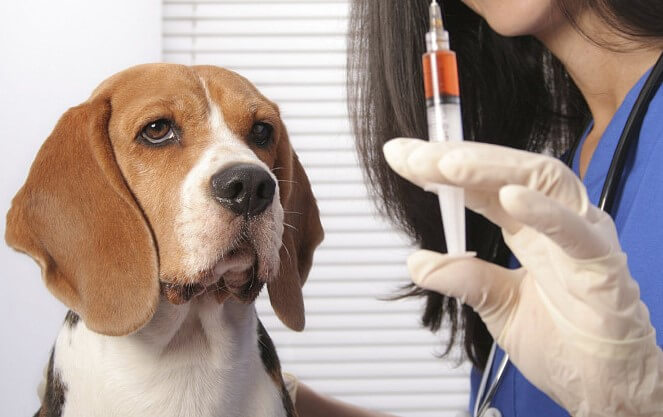 The only effective preventive measure: vaccination of the dog against the plague. For this, a basic immunization at eight, twelve, 16 weeks, and 15 months of age is recommended. Thereafter, vaccinations should be renewed every three years.

Therefore, regularly check your dog’s vaccination status and, if necessary, re-vaccinate him!

To avoid exposing your dog to an avoidable risk of infection, do not touch dead or live wild animals. If possible, keep your dog out of contact with wild animals.

Has your dog already developed the distemper? You should wash the textiles your dog has come into contact with for 30 minutes at a temperature of at least 56 degrees. In addition, disinfection of dog supplies and the environment, regular washing and disinfection of hands, and isolation of the sick dog protect against further spread of viral infection.