The Pinscher descends from the so-called peat dog, which joined humans thousands of years ago.

But not all Pinschers are the same. At first glance, one often thinks of very small, lively dogs. Nevertheless, this dog breed comes in different sizes. The Doberman is the largest Pinscher and the Affenpinscher is the smallest.

Let’s take a look at the different pinscher breeds. 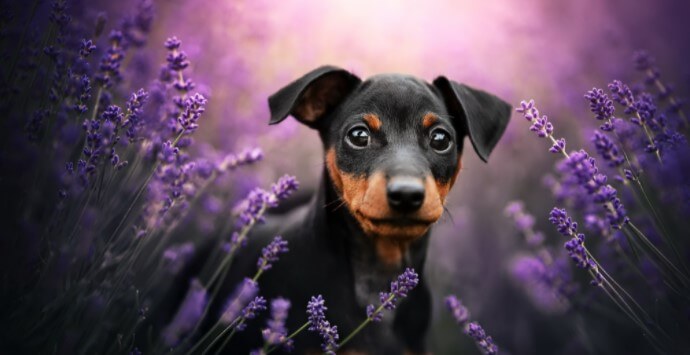 A German dog breed that has been recognized for around 100 years.

Its fur is smooth and its hair is short. The color of the coat can be dark brown to fox red or two-tone black with brown to red markings. The ears are set quite high, folded, and turned forward.

Its eyes are oval of different colors.

These small Pinscher species were created at the same time as the German pinscher. Just like the larger versions, the little one is very trainable and a very affectionate little fellow. Its ancestors were mostly kept on farms and in horse stables where they had the task of keeping mice and rats away from the feed.

This small breed needs its daily walk just like the larger Pinscher species. If you take him for a walk in winter or in colder temperatures, a small cover would be appropriate, as he is very sensitive to the cold due to his short fur. But once he’s out there, there’s usually no stopping him.

Basically, it is a scaled-down version of its slightly larger brother. It only reaches a height of between 25 and 30 cm and only weighs about 5 kg. It often comes in the reddish-brown color of a deer (fawn) – hence the name Rehpinscher.

It is one of the oldest German dog breeds and has hardly changed at all over time.

The Affenpinscher also only reaches a size of between 25 and 30 cm. However, its fur is not smooth, but rough, wiry, and protruding. It owes its name to its monkey-like facial expression. It mainly comes in black, but there are also brown and gray editions. The Affenpinscher ‘s bite has a small overbite.

The Dobermann (Dobermann Pinscher) is 60 to 72 cm tall and weighs up to 45 kg. Since the ears can no longer be cropped, it has lop ears. The fur colors are black with reddish-brown branding and markings.

Its eyes are almond-shaped. Depending on the coat color, the dog’s eye color varies.

While the German Pinscher and the Miniature Pinscher were and are basically just companion dogs or farm dogs, the very intrepid Affenpinscher was mainly used for rat and mouse hunting.

The Doberman was also a companion dog as well as a utility dog ​​for a variety of purposes. It was also used as a guard dog, guard dog, herd guard, and hunt dog.

Due to their naturally alert nature, all Pinschers make suitable guard dogs. Although they are not notorious barkers, they are still very vigilant and alert. They strike when a stranger enters the yard or the house because they are suspicious at first if they don’t know someone yet.

Meanwhile, all Pinscher dogs are also ideal family dogs. They are very affectionate and loyal.

They get along extremely well with children. Since the little dogs are very eager to learn, they can learn a whole range of tricks.

All Pinscher breeds have a very loving nature.

Clever and affectionate, intelligent and sensitive, they are therefore always a loyal and fun-loving companion to their family. With these qualities, they are also a very good playmate for children.

Dogs of these breeds usually get along very well with other dogs. The purchase of a second dog is therefore possible.

These dogs are extremely willing and willing to learn, regardless of their size. They are simply interested in what people want (from them) and what they, the Pinscher, can do with it.

With a loving but consistent upbringing, you will achieve wonderful results with this confident dog. This also applies to the hunting instinct, which is developed to varying degrees but can be acted upon with training. Properly brought up, he can let off steam in the great outdoors without a leash.

German Pinschers need a lot of exercises. They feel most comfortable in a large garden or on a farm. But they are also suitable for the city apartment if you regularly take long walks with them. It also enjoys running next to its bike. It also likes to go on excursions with a horse as a companion dog.

Housing is not a problem for smaller Pinschers if they are sufficiently exercised. If they are quiet dogs in the apartment, then their endurance and resilience come to the fore in the forest and field.

No matter what size – the Pinscher likes to romp around exuberantly and spiritedly and loves long walks, where he can really let off steam.

Dog sports such as agility are suitable for Miniature Pinschers, but German Pinschers are not always enthusiastic about it. 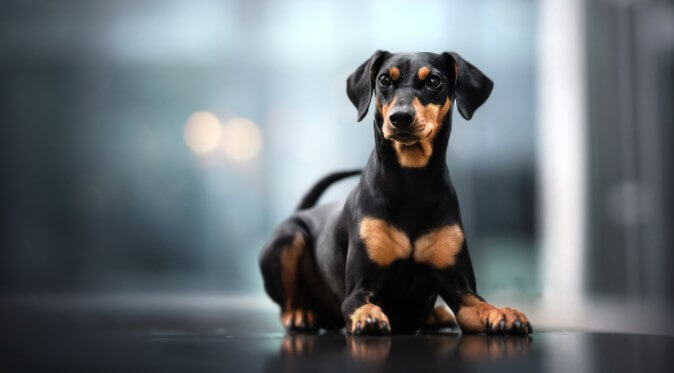 Pinschers are very strong and healthy dogs. The breed does not actually show any of the otherwise common hereditary diseases. Tail and ears can no longer be docked in Germany.

Since these dogs have very thin ear edges, which are also only sparsely covered with fur, the risk of injury to the ears is relatively high.

Conclusion: All Pinscher species are refreshingly healthy and by no means overbred dogs.

On average, German Pinschers and Affenpinschers reach an age of 12 to 14 years, the Miniature Pinscher 13 years, the Doberman 10-13 years.