Gobies are not one of the aquarists’ greatest favorites. The pastel goby is an exception. It is easy to keep, stays small, does not only live close to the ground like other gobies, shows very beautiful colors, and is also relatively easy to breed. You only have to be careful when it comes to nutrition. 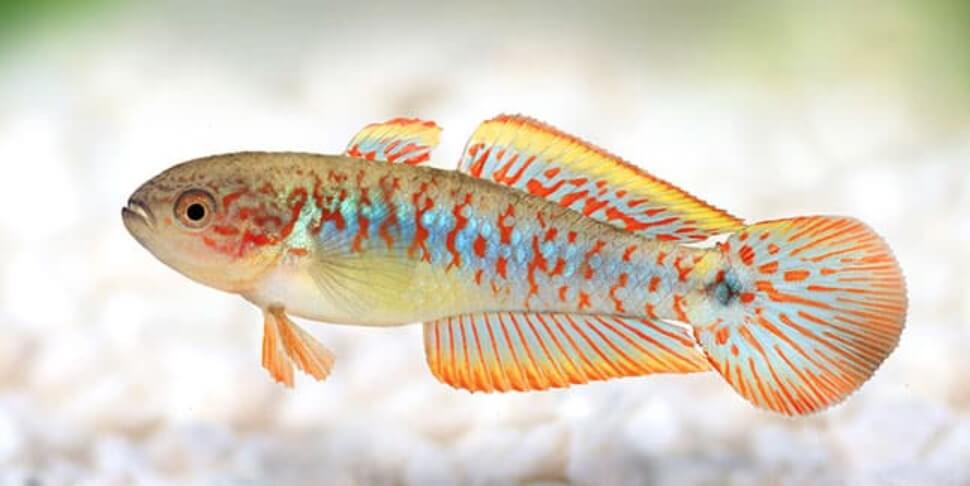 Interesting facts about the Pastel Goby

The pastel goby reaches a length of about 6 cm in the aquarium, older specimens can also be up to 7 cm long.

It is one of the most colorful freshwater gobies. The body has a metallic bluish shimmer, above it are bright red scales arranged in irregular rows. There is a black spot at the base of the caudal fin. The fins are set off in yellow. The eyes have a light iris and a red pupil.

Pastel gobies are found in small streams in the east of the island of New Guinea (Republic of Papua New Guinea) and are relatively widespread.

In adult fish, it is easy to differentiate, because the males develop a distinct forehead hump, the females an orange, thicker belly. But if you look closely, you can also distinguish between adolescents by gender. While in the males the yellow color of the unpaired fins extends to the edge of the fin, in the females these are darkly lined with the – somewhat weaker – yellow stripe. In addition, they are a little weaker in color overall.

The pastel goby spawns in small caves (such as clay tubes). The up to 200 eggs are attached to the ceiling of the cave and guarded by the male until the fry swim free. This is the case after ten days at the latest. The breeding aquarium does not need to be particularly large. The young can immediately eat newly hatched Artemia nauplii.

The pastel goby can live six to seven years with good care.

In nature, almost all gobies only eat live food, including the pastel goby. That is why it is best to give them fine live or frozen food, which should be an obligation for breeding. Otherwise, you can try to serve granulated feed, which is occasionally accepted, but flake feed, on the other hand, almost never. Switching the young gobies from Artemia nauplii to granulated food is the most difficult and can lead to losses if you are not careful.

If the aquarium is big enough, you can keep a larger group of pastel gobies. But even two or three copies feel quite comfortable, whereby the gender composition is irrelevant.

An aquarium of 54 l (60 cm edge length) is enough for a couple. You can even keep some by-fish here.

Since the pastel goby is an extremely peaceful fish, it can be kept with all other fish that are not too big and just as peaceful. Only long-finned fish should be avoided because these gobies can attack them.

The temperature should be between 22 and 25 ° C and the pH value between 6.5 and 7.5. Frequent water changes are important (around a third every 14 days).