There are different hoof beat figures in equestrian sport. These are defined processes that horse and rider cover. On the one hand, you can ride harmoniously with several horse-rider teams on a riding arena or in the hall without getting in each other’s way, and on the other hand, the different figures are useful in training with the horse. So the horse can be wonderfully exercised through turns and combinations. “Positioning” and “bending” can also improve permeability. Depending on the hoof-beating figure, horse and rider are challenged more or less intensively and the rideability of the horse and the couple’s communication are checked. 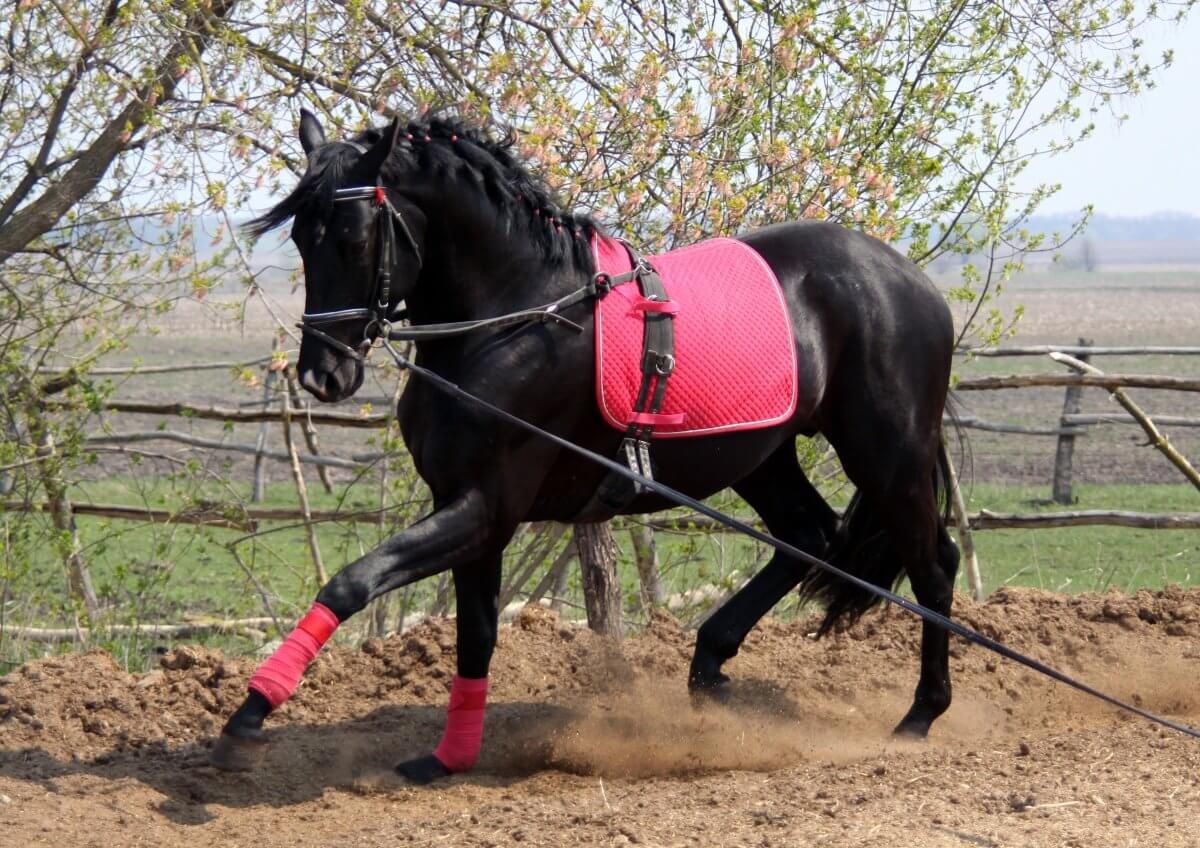 The simplest of the hoofbeat figures is the “whole track”. You simply ride around the outside of the gang.

Just as there is a “whole track”, there is also a “half-track” in equestrian sports. You don’t ride straight ahead from halfway through the track, but turn off exactly halfway, once through the middle, until you hit the hooves again on the gang. At the point where you turn, there are lane markings “B” and “E” on the board, which can serve as a guide.

With the help of the points that can be found on the band of a riding arena, you can orient yourself with the hoof figures. If you imagine a normal riding arena measuring 20 x 40 m, the letters F, B, M run counterclockwise on one long side, C on a short side, and H, E, and K on the other long side, plus on the second short side A. In the middle is the invisible point X. There are also four compass points, which are exactly 10 meters away from the respective short side and mark the point at which a correctly ridden compass touches the hoofbeat.

The compass describes a large circle that you ride either on one half of the square or on the other side. But there is also the middle circle, which is ridden exactly around the middle of the track. A compass runs along with points A, compass point, X, and compass point. The opposite circle, on the other hand, runs at points X and C and of course at the two circle points there.

A volte is (like a compass) a ridden circle, but it differs significantly in size. A volte is ridden with a diameter of 6 m, 8 m, or a maximum of 10 m. A smaller circle is more demanding than a larger one.

The turn-around is one of the hoof-beat figures in which the direction is changed. Riding the volte can be done independently from a fixed point. To do this, turn away from the hoofbeat to the volte at any point. Instead of riding another semicircle from halfway through, ride diagonally back to the hoofbeat so that you ride in the opposite direction. Incidentally, this is exactly what the hoof-beat figure “From the corner returns” looks like, only that it is only ridden in one corner of the square.

To put it simply, a change of hands means a change of direction, as also happens with the turnaround. This can be, for example, “Change out of the circle”, where a big eight is ridden from one circle to the other, or also “Change through the whole path”, where you ride the corner well after the short side and then turn away at the point and ride diagonally through the track, where you can ride the corner well again. This hoof beating figure is also available on the halfway, namely “change through half the track”. In doing so, you turn away exactly the same, only that the angle is sharper, because you do not arrive in the corner, but already at E or B. There is also “Change through the circle”. This is a demanding hand change. Here you can imagine a yin and yang sign that represents the lines of change. You ride on the circle and turn at the circle point to the long side on a semicircle up to the middle of the circle, where you connect a semicircle in the other direction. And you’re back on the circle but in the opposite direction.

The double serpentine line makes two smaller ones instead of one big one. You start at the same point after the corner, make an arc with a distance of 2.5 m, hit the hoofbeat again at B or E before you ride another arc, and then come back to the last point on the long side.
If you want to ride serpentine lines through the path with three arches, try to imagine three large arches in your head in order to ride them as equally large as possible. You start the arches on a short side, turn away through the middle, and ride in an arch over B or E back to the other side through the track point in front of the short side. Since there are no correct fixed points, it is more difficult to ride the arches evenly and requires a little practice.