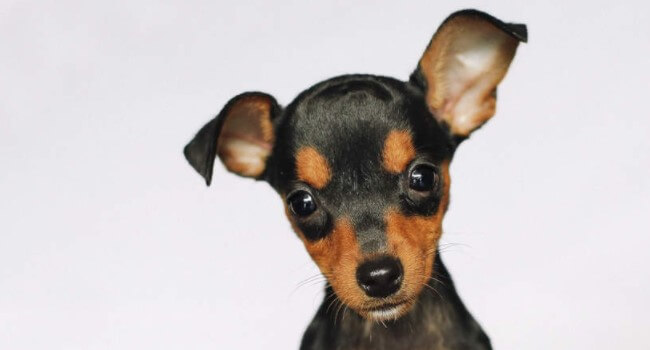 Miniature Pinschers are lively little dogs. They are also known by the names Mini Pinscher,  Minpin, also Minidoberman, or Small Doberman. Sometimes the term Rehrattler (Austrian) is mentioned, which, however, only means the single-colored brown Pinscher.

A recognized German dog breed, the Miniature Pinscher is the small version of the German Pinscher. The breed is said to have its origins in the Frankfurt am Main area. It has been officially bred there since 1880. This breed is very old. The ancestors are beaver and shepherd dogs. They were already depicted in drawings in the Middle Ages. Whether these dogs are also related to the terrier is not clear.

In addition to the German Pinscher, the Pinscher family also includes the smaller Affenpinscher and the much larger Dobermann. The pinscher, along with the Schnauzer, descends from the ancient peat dogs. The origins of this dog breed are a good 4,000 years before our time.

Miniature Pinscher – Its Use

As small as he is – he guards his people and everything that goes with them. Lively and a bit cheeky, he drives away uninvited guests and occasionally pinches his calves. So he likes to give his request even more emphasis.

He is slowly being rediscovered and is an ideal family dog, especially for active people in the city apartment. He doesn’t take up much space, doesn’t eat much, is loyal, affectionate, easy to train and very teachable, and just a watchful companion. He is loyal to his master until the end of his life.

He is a very good watchdog who always wants to protect his family. Because of this, he sometimes tends to bark a lot.

Its physique is strong and muscular. Its fur is smooth and short-haired.

How big and how heavy will it be? It is very small – 25-30 cm with a weight of just 3-4 kg for an adult dog. It is very fond of keeping his ears erect, which gives him a cheeky, cheeky look.

The coat is smooth, short, and lies close to the body.

Typical for the coat color of the Miniature Pinscher is the two-tone black and fawn. The black basic color is with reddish-brown markings or the dog has a reddish-brown coat, whereby this shiny brown edition is also called Deer Pinscher – because the coat is reminiscent of that of a deer.

The Miniature Pinscher is intelligent, cheerful, sociable, clever, and very eager to learn. It has many good qualities that are important in a companion dog these days.

It is good-natured and very affectionate towards its people, although it can also tend to bond with one person in particular.

The Miniature Pinscher is an ideal family dog, also for the city apartment.

It has a good relationship with children. He’s an easy-going little friend for the whole family.

It is also notable for his vigilance. This little dog isn’t a barker, yet he takes vigorous care of his family. Barking alone is sometimes not enough for him, but it can also happen that you are pinched, especially by the smaller version, the Miniature Pinscher.

It likes to chase after other animals, but it will never really stray too far from its owner.

You should keep him busy as he is very lively. In any case, there is no longer a dull moment with him. It tends to be wary of strangers.

With proper upbringing, the Miniature Pinscher can easily be trained to be a pleasant companion dog. If necessary, you should work on his joy in barking, his hunting instinct, and his protective instinct.

Start training the puppies right away. He likes to learn basic exercises as well as little tricks little by little.

Due to its size, the Miniature Pinscher is very well suited to being kept in an apartment. Of course, he then needs a lot of regular exercises, exercise, and a real job.

These dogs are not only highly intelligent but above all extremely agile. So you need enough movement and demand. They often tend to be coddled because of their small size. They don’t like that at all. They want to romp and run. Search games are also carried out enthusiastically.

It is an active and active dog that needs at least 1 hour of exercise a day. 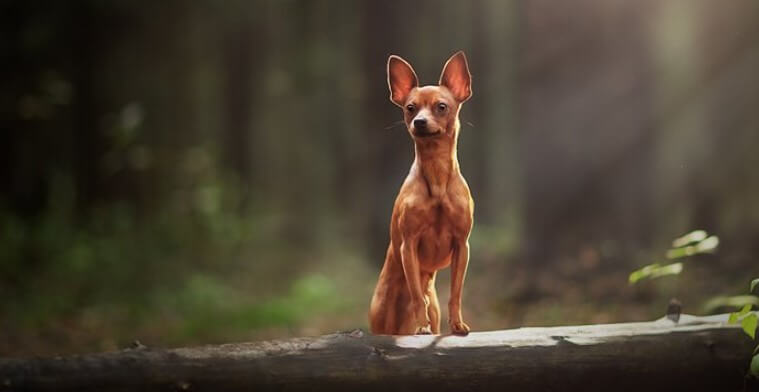 A Miniature Pinscher is very easy to care for. The only thing you should pay attention to – he has a very short coat without an undercoat and is therefore sensitive to cold, especially in winter. So if you take him out into the cold winter air, especially if the dog can’t necessarily be very active all the time, then a little coat is a good idea.

Its place at home should also be a basket with a roof, and he also loves a blanket to hide under.

Coat care: Due to its short, dense coat, it is very easy to care for and only needs to be brushed from time to time.

The diet may consist of dry food, but he also likes some fruit or vegetables. You should rather avoid food with sugar because your teeth don’t tolerate it well.

The Miniature Pinscher is a very original dog and does not belong to the overbred breeds, which is why it is also very robust in terms of health and does not have any compulsively occurring clinical pictures.

Miniature Pinschers are small, hardy dogs that usually live to be 13 to 15 years old. They usually stay healthy and fit into old age.

Originally, the Miniature Pinscher was kept as a farm dog to drive away rats and mice (pied pipers), but it was also very popular as a companion and protection dog.
Since he has a strong protective instinct and is a very good guard, he was also often seen in the company of horse-drawn carriages or carriages. Nobody would have dared to touch anything there, because the miniature pinscher would have sounded the alarm immediately.

Then came the time of the fashion dog for him. The fine society ladies liked to adorn themselves with this little dog, as they could always pick him up and carry him around. He became a lap dog.
Unfortunately, these jaded society ladies have transferred their reputation to the little rascals. This reputation damage and also the emergence of other small dog breeds have almost made the Miniature Pinscher fall into oblivion.